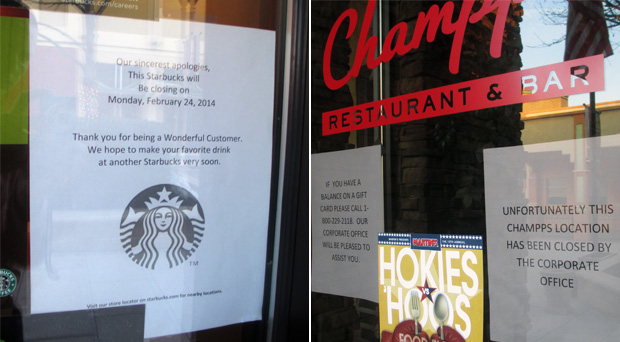 By next week, two Stony Point Fashion Park restaurants will have gone dark within a matter of days.

Starbucks Coffee at Stony Point will close its doors Monday, Feb. 24, less than a week after next-door neighbor Champps Americana restaurant closed at the Southside mall.

Signs announcing the closings were posted at both stores Wednesday. Champps, which shut down Tuesday, blamed its closing on a decision at its corporate level. Starbucks offered no reason for shutting down. Neither Starbucks representatives nor Stony Point general manager Steven Bonniville returned calls seeking comment by press time.

The storefronts sit side by side and face another long-vacant restaurant space. Their closings will leave only a Chipotle open in a four-diner corridor at the mall’s easternmost entrance.

Signaling a commitment to the Southside mall, Taubman, the shopping center REIT that owns Stony Point, recently put up almost $100 million in cash to pay down an expiring loan backed by 343,000 square feet of retail space at the property.

The Starbucks closing was well know among other Stony Point tenants weeks ago. Look for more closures to come up as other 10 year leases expire in the next few months.

What a shame, but completely understandable.

I say a “shame” because I hate to see any business close, and of course, this portends more for Stony Point. I would hate to see this place with “B” grade stores in a few years.

But, business is business as they say. A conclusion can be drawn on one’s own, the numbers just don’t seem to be there.