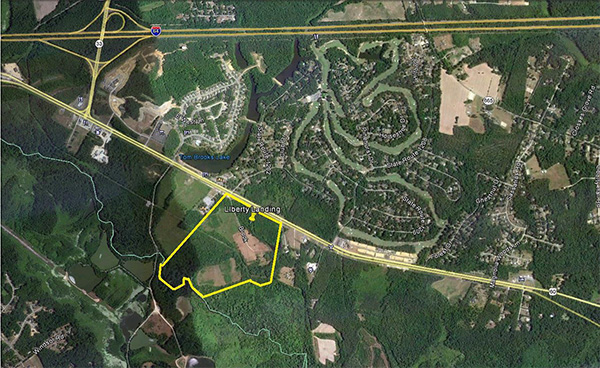 Liberty Landing is planned for 112 acres off Route 60 in Bottoms Bridge. (Image courtesy of Boyd Homes)

A Virginia Beach-based homebuilder is looking to a land a large project in New Kent County.

Boyd Homes wants to build Liberty Landing, a mixed-use development with 260 rental townhouses and apartment units, another 190 or so for-purchase townhouses, and a commercial town center.

The planned development, to be on 112 acres off Route 60 in Bottoms Bridge, is still in its early stages. Boyd Homes president David Rudiger estimated that it would cost upward of $100 million to build.

But it must first get past the New Kent County Planning Commission. Boyd Homes presented details of the project to the commission on Tuesday in anticipation of a public hearing and vote, possibly as early as March.

Rudiger said the company has been planning Liberty Landing for about eight years.

“This project has been in the works for quite a long while, but we have used that time to listen to the concerns and desires of the residents and representatives of New Kent County to develop the plan that we are now presenting,” he said.

Liberty Landing would be about 20 minutes from Richmond and across the street from residential subdivisions Patriots Landing and Five Lakes. It would provide a housing option that New Kent hasn’t seen as it grew before the recession and since: apartments (including studio and one- and-two-bedroom options).

Rudiger said a previous plan – which had about 150 more residential units and included single-family traditional houses – was met with opposition from residents concerned about potential strains on schools and emergency services. The plan was changed to decrease the number of units and removed the single-family houses in response to that, he said.

“This is something for folks just starting their careers and going out on their own, some young families, and folks looking to downsize,” he said.

Rent prices haven’t been set, but Rudiger estimated that the for-purchase townhouses would start in the mid- to-upper $100,000’s.

As for the commercial side of the development, Rudiger said the company would like a mix of shops and restaurants, a bank and an anchor grocery store. Rudiger said the plan calls for about 200,000 square feet of leasable space.

A piece of the 112-acre parcel and a existing building will be offered to the local fire department for use as a new station as part of the deal.

A recent overhaul of the county’s zoning maps granted the property commercial zoning, so a zoning change is only needed for the residential units, he said.

If it gets all necessary approvals on schedule, crews could start building Liberty Landing at the end of 2016 or in 2017.

Boyd Homes has another local project in the works: a 600-unit apartment complex at the Stonebridge development in Chesterfield County.

Rudiger said the company is finalizing the building plans for the Stonebridge project and hopes to submit them this month to get a building permit. If all goes as scheduled, construction will be underway by late spring, and the first units should be available for rent by summer 2015.

WHERE THE HECK ARE ALL THESE FOLKS GONNA WORK?