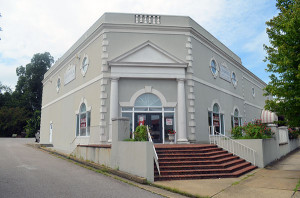 The owners of a Libbie and Grove retail property want to add a little more residential ritz to the neighborhood.

Plans are falling into place to add a third floor and four $1 million condominiums to the former Chadwick Antiques building at 5805 Grove Ave.

The project is a foray into development for the two couples behind Fraiche, the Libbie and Grove home décor shop that moved into the Chadwick building after the property was purchased last summer.

“It was really more than we needed for just Fraiche,” property co-owner Gibbs Moody said of the 16,000-square-foot building. “It all of a sudden occurred to us, given its location next to [Country Club of Virginia] and Bon Secours and the Westhampton theater and all the other amenities that are around there, it would be an absolutely wonderful place for residences.”

The building came on the market when Chadwick’s Antiques was ready to downsize. Moody and his wife Sharon, along with husband and wife Mark and Lou Gambill, paid $3.1 million for the building when the deal closed last year.

The planned units, dubbed the Chadwick Condominiums, will target the empty-nest crowd.

“We see this as a trend that is going to continue as people age and want to downsize but don’t want to move too far away from where their homes are,” Mark Gambill said.

Gambill hopes to begin lining up letters of interest for the condo units after the project receives city council approval. Chadwick Condominiums will go before the city’s planning commission on March 17 seeking a special-use permit. A city council review for the project is scheduled for March 24.

Files at the city planning department showed generally positive reviews from neighbors for the plans, with about 20 letters of support from nearby residents and business owners. There were also a handful of letters of opposition from residents concerned that the building’s proposed size would be out of character with the rest of the neighborhood.

Both Mark Gambill and Gibbs Moody declined to say how much construction would cost. The condos will range from 2,522 square feet to 4,118 square feet and start at just over $1 million. Studio Z Architecture designed the project. Hungars, LLC is working with Xenith Bankshares Inc. for financing. The team has yet to settle on a general contractor.

The building’s first floor will remain retail space. The existing second and soon-to-be-added third floor will house the condos.

If all goes according to plan, Gibbs Moody said construction could begin around June and the project would take about six months to finish. That would bring Chadwick online around the same time as the Tiber, a condo project at nearby 510 Libbie Ave. that is also aimed at the empty-nest demographic.

None of the Hungars LLC members are developers by trade. While Gibbs Moody said he has enjoyed the Chadwick process thus far, he doesn’t have any immediate plans to take on more real estate development projects.

“You should never say never, but I think this is probably a one-off for us,” he said. “You don’t find locations like this every day, so it would be very hard to replicate. So maybe we’ll call ourselves happy with this one and leave some room for the next guy.”

The Tiber is already “sold out” and under roof, right? And this project has yet to begin? How will it catch up that quickly to come on line at the same time?

This is a bold move for a first time development on behalf of the developers. I hope they succeed for the future of condo development in Richmond.

I think the true luxury condo market is massively underserved in Richmond. This one may be only 4 units but I bet they are all gone within 9 months.

This is another great project for an area that can absorb this type of housing. The trend is spot on with empty nesters, and other folks as well, wanting walkability and no maintenance. Excellent perspective too – “You don’t find locations like this every day, so it would be very hard to replicate. So maybe we’ll call ourselves happy with this one and leave some room for the next guy.”

The Tiber will take longer because they had to raze existing buildings and break ground to build a completely new infrastructure – literally from the ground up.

What’s the deal on parking? Do you get to pay a million dollars plus for a unit and then try and park on the street? Even when the building was retail, it was hard to find parking and the back lots was frequently full. I am surprised the local businesses would applaud a deal like this if it is going to tie up 8 or so parking spots permanently.

I seem to remember a few years ago when someone was trying to build a 3 story building where the BP is and people were losing their minds over it. Maybe this will help pave the way and create a positive case study.