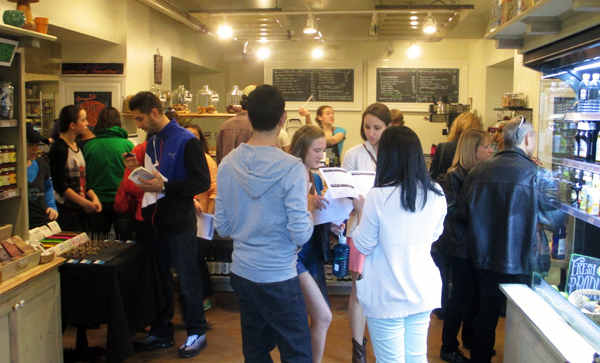 The March 8 grand opening of the third Urban Farmhouse in Church Hill. (Photo by Burl Rolett).

The owner of Urban Farmhouse Market and Café held a grand opening March 8 for her third location, which is in the basement of the Lava Lofts apartment building. The event pulled out all the stops, with everything from music to a petting zoo to a mini-festival featuring local food and drink companies.

Hardywood, Lickinghole Creek Craft Brewery, Daddy G’s Rockin’ Salsa and Health Warrior were among the local vendors on hand for the Church Hill opening. Lava Lofts is a 50-unit apartment building near the corner of North 33rd and Marshall streets.

Richardson finalized the lease on the Church Hill location in fall of 2013. Since then the apartment property has attracted a new landlord, as Dennis and Susan Ould bought the Lava Lofts for about $8.3 million last month.

The first Urban Farmhouse opened in Shockoe Slip in 2009. Richardson added a second location in Midlothian last year and is working on a fourth – on Norfolk Street in Scott’s Addition – which will be the largest yet.