A retail giant is bringing its smallest concept to Richmond and giving a Southside shopping center a shot in the arm.

Walmart has submitted plans to build a Neighborhood Market grocery store at Meadowbrook Shopping Center at Chippenham and Hopkins Road in Chesterfield.

It will be Walmart’s first Richmond-area Neighborhood Market and will kick off what the property’s owners see as a “second life” for the 50-year-old Meadowbrook center.

“What we’re planning on is revitalizing the storefronts, the sidewalks, the lighting and the parking lots in coordination with what Walmart is doing,” said Teri Pruitt, vice president for Meadowbrook ownership group W.S. Carnes.

Pruitt expects Walmart to raze about 30,000 square feet of retail space to make way for Walmart within the next 30 days. Walmart will then build its 42,000-square-foot store at Meadowbrook’s southwest corner, according to a site plan submitted to the Chesterfield County planning commission.

Carnes developed Meadowbrook about 50 years ago in conjunction with the nearby Meadowbrook Estates and Meadowbrook Apartments complexes, Pruitt said. The center has been down an anchor since 1999 when supermarket company A&P sold its Meadowbrook grocery store to Food Lion in a package of 30 Virginia stores.

With its own supermarket already open at nearby Meadowdale Shopping Center, Food Lion let Meadowbrook’s 25,000-square-foot anchor store go dark over until its lease ran out about seven years later, Pruitt said.

“They sort of held the space hostage for quite a while,” she said.

Part of the space has been left empty by design, Pruitt said, to leave leasing opportunities in case Meadowbrook landed a new anchor.

“We’re hoping with the Walmart coming that it will bring new tenants into the center,” she said. “That usually is what comes with a Walmart.”

The Neighborhood Market is a grocery-centered store that on average runs about a fourth of the size of Walmart’s Supercenter model. The retailer has big plans for its smallest concept as last year Walmart announced plans to open more than 200 new Neighborhood Markets over an 18-month span. The Richmond Times-Dispatch first reported Walmart’s plans at Meadowbrook.

The move into Richmond also comes as Walmart works on new Supercenter at Reynolds Crossing near the intersection of Glenside Drive and Forest Avenue. 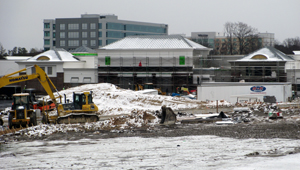 The Reynolds Crossing Walmart under construction. (Photo by Burl Rolett.)

Pruitt would not comment on what W.S. Carnes plans to spend to update the shopping center and how costs for the new Walmart will be divided between the developer and the retailer.

W.S. Carnes has been working to bring Walmart to Meadowbrook on and off since about 2008, Pruitt said, and hired Innsbrook developer Sidney Gunst as a consultant to help lure an anchor tenant about a year ago.

Cushman & Wakefield | Thalhimer broker Connie Jordan Nielsen handles leasing at Meadowbrook. She said Walmart’s lease has not yet been finalized, but hopes a new anchor will spur leasing interest for the roughly half-filled shopping center.

“It has a lot of space that’s been vacant for a really long time and it really just took the right grocer to get focused on the market,” she said. “And I think we’ve found that.”

This is wonderful news for the nearby neighborhoods bordered by Chippenham Parkway, Route 10, Falling Creek Reservoir, and Meadowbrook Country Club. There are about 1000 homes here built mostly by W. S. Carnes ranging from 1500 to 5000 SF and averaging about 2200 by my best guess. For many long years Meadowbrook Plaza has been a blighted shopping center, slowly but surely losing tenants. I live in Meadowbrook Estates and consider it to be an absolute gem of a neighborhood that often gets overlooked because the nearby shopping has been very sub-standard compared to Northern Chesterfield for many long years… Read more »

I am very excited to see a Walmart come into our neighborhood. Meadowbrook Shopping Center is in need of revitalizing. It is a wonderful area and I am sure other stores will gladly open there now.

cool i can not wait.. just what we need . hate to travel up Midlothian trnpk to walmart pharmacy.

I was 7 years old when A&P opened its doors in Meadowbrook Shopping Center. My mother shopped there and I shopped there as an adult. When I was a child, the area was upper middle class and very nice, with the Meadowbrook Country Club right down the street. It is exciting to see revitalization in this area I have called home for over 50 years.

Karen, I moved to Meadowbrook Estates in 2008. Attitudes like yours are pretty common amongst the older residents (and Meadowbrook Estates is an older neighborhood, the median age is probably near 60). The funny thing is, it is STILL mostly upper middle class and very nice. Meadowbrook Country Club is alive and well (and boasts the two hottest junior golfers in Richmond in Adam Ball and Lyberty Anderson). I think the whole area I described above suffers from an inferiority complex because of the slow and steady decline of Meadowbrook Plaza and the local schools being near the bottom of… Read more »

Chris, so sorry that you thought that I had an “attitude”. I was just recalling memories as a child. What I said could be applied today. But you have to admit that Meadowbrook Plaza and Meadowdale Plaza, along with some surrounding areas need perking up. I am sure that your area is just fine. I just remember it when everything was new. That’s all I was saying. I hope the revitalization serves all in the area well.

Hi Karen, I meant attitude as in disposition, not “giving attitude”. Your sentiments are quite common like I mentioned, no need to apologize for them. Meadowbrook Estates has a very active neighborhood association and I’m sure I speak for the lot when I say we all want revitalization of Meadowbrook Plaza to take hold. Meadowbrook Plaza is blighted, its just that simple, and it drags down the whole area. A new Meadowbrook Plaza is a game changer.

Karen, by chance do you or anyone on this thread have any old pictures of Meadowbrook Plaza when there was an Mayberry’s Ice Cream Shop? I grew up in Meadowbrook Apartments which was gated when I grew up there, although it is not gated anymore but still looks nice. I went over to take some pictures. I am also looking to find someone who knows the family that owned Meadowbrook Restaurant, which was located in another area in Meadowbrook but later in the late 80’s moved over to Meadowbrook Plaza. I would like a picture of the old restaurant because… Read more »

I agree with Chris wholeheartedly. Meadowbrook is such a great neighborhood and I don’t understand why it has been so overlooked. It is a great location convenient to all of Richmond with quality custom built homes. I moved to Meadowbrook West in 2005 from a 1300 Sq Ft house in the Northside to a gorgeous 3300 Sq Ft all brick house (with inground pool!) in Meadowbrook……I thought I had hit the lottery:). I was a little worried because it was so affordable but now I would not live anywhere else. Sure I could afford to pay more…..but why should I… Read more »

Wow – I lived there from late 60’s through early 80’s. Understand Chris’s comments – Image issue no doubt. Nice to see some improvement. Hard to believe it’s been that long. I really liked living there and “Garland Heights” has changed, but still looks good. Congrats Meadowbrook residents. Hope the lines are better there ;^)

Tim, my parents sold my childhood home around that year with an in ground pool! Wonder if you live in my old home on stornoway. Loved that home and I’m excited about the walmart. I remember A & P turning into SuperFresh for a couple of years but the article didn’t mention that. My sister worked there for a bit in high school and I worked at the Wendy’s in that plaza during high school. Only good memories.

I don’t live in Meadowbrook, but I do live next door, so to speak, in Edgewood. My family moved here two years ago from NoVA so I don’t have the memories that many of you do of this area, but we chose this neighborhood to buy a house because it reminded us of how our own neighborhoods were growing up, in fact, we had an A&P too and seeing the old one here, albeit empty, really made this area feel like home. I am thrilled that we are getting a new store close by. Admittedly, I was hoping for a… Read more »

Over the weekend I put a contract on a home in Meadowbrook Estates. This beautiful custom home was built in 1975 and is solid as a rock. My last home was in Goochland and built in 2007. As you walked down the hall and up the stairs you could hear the floor “creak.” It was a beautiful home of about the same size on 3.5 acres, but it is nothing compared to what I am buying in Meadowbrook. This neighborhood is a hidden gem with a great history. I grew up in Midlothian (Salisbury) and it reminds me of the… Read more »

I am trying to find a K. Coosaboon that retired from Owens Illinois in 1964. Please reply

I grew up in the Meadowbrook area and without doubt the homes built by W.S. Carnes in Meadowbrook Estates and Meadowbrook West in the 60’s and 70’s are far superior to anything being built today. They really don’t built like that anymore.