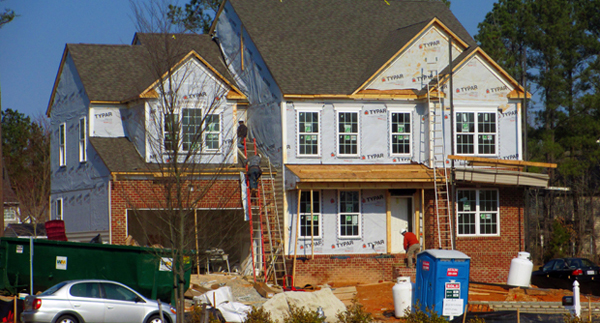 A house under construction in Stable Hill’s original section. (Photo by Brandy Brubraker.)

Slowed by the discovery of an unmarked graveyard, plans can once again move forward at a Glen Allen housing development.

A judge ruled Friday that an unmarked graveyard may be moved to make way for the next phases of Stable Hill, a Henrico County subdivision off Nuckols and Holman Ridge roads.

Since no one objected to moving the remains, Henrico County Circuit Judge James Stephen Yoffy said he would OK the disinterment of the graveyard, which is located on a small, once overgrown piece of land.

The graves came to light during a review of old property records in preparation for the construction of the second and third sections of Stable Hill.

The only proof of its existence was a small notation on a handwritten 1958 county plat map found during the review.

“There are no monuments, no markers,” Robert Parkerson, a Richmond attorney representing the landowner and developer Stable Hill Development Company, said at Friday’s hearing.

Virginia code states that remains in abandoned family graveyards may be disinterred and reburied elsewhere, provided no one has been buried at the site within 25 years.

Property owners must also get court permission and take appropriate steps to notify the descendants of those buried there. When possible descendants cannot be identified, the matter must be made public through a legal ad.

Parkerson said he received only one call after placing a legal ad about the gravesite. 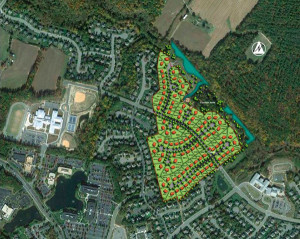 The caller said that her great grandmother might be buried there but said she had no way of knowing for sure, he said. No descendants appeared at Friday’s hearing.

Suzanne Blanton, president of Stable Hill Development, said the property has been in her family since at least 1950 and no one ever knew anyone was buried on the land.

Blanton said the cemetery sits on a .13-acre piece of land and affects only two lots in the new phases of development. Forty-six new houses are slated to be built on 17 acres.

A licensed funeral director will be hired to move the graves – and whatever is found within them – to a respectful final resting place, Parkerson said.

Stable Hill Development hired an archaeology firm to inspect the property last year. It determined that 23 grave shafts are likely there. The company estimated that eight were likely adult burials and 15 were burials of children or teens.

Depending on how long ago the remains were buried, Thunderbird Archaeology’s report said there might be nothing left in the graves except coffin nails and handles.

“Apparently, after time, there’s just nothing there,” Parkerson said.

Winchester Homes, which built the houses in Stable Hill’s first phase, has agreed to buy all of the lots in these new phases. The county planning department is currently reviewing the plans.

First-phase construction started in 2011, and more than half of the neighborhood’s 45 houses have been built, Winchester said. Ninety-one lots in total are planned for the 44-acre development.

According to Winchester Homes’ website, houses at Stable Hill start out in the mid-$400,000s.