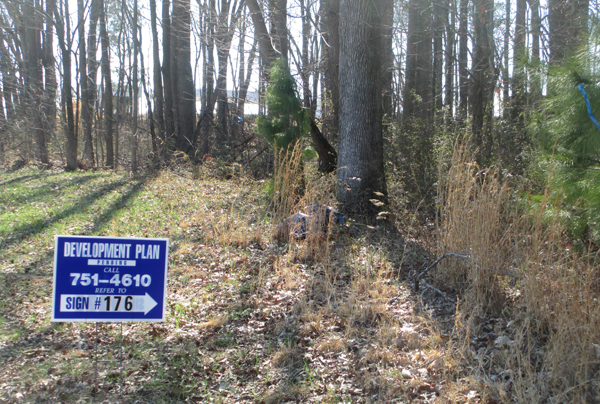 The site for the proposed hotel. (photo by Burl Rolett)

Colonial Heights-based SINA Hospitality is looking to build a new 51,000-square-foot Fairfield Inn and Suites at 150 N. Pinetta Drive in Chesterfield, according to plans submitted to the county last month.

SINA Hospitality Chairman Anil Patel said his company hopes to break ground by the end of the year and open the new hotel in late 2015 or early 2016. It will join a 17-year-old Best Western and a 20-year-old Sheraton Inn in what Patel called an “overlooked” area along the Midlothian Turnpike just west of the Powhite Parkway.

“Everybody wants to be on the Short Pump side,” he said. “This particular area interested me mostly because there hasn’t been a new product there in such a long time and there is no Marriott product.”

Patel estimated the new hotel, which will include an indoor pool, fitness center and conference room, will cost about $9 million to build. Last September, SINA bought the four-acre parcel the hotel will sit on for $172,130 according to Chesterfield County records.

SINA has secured a franchise agreement with Marriott, the Fairfield Inn brand’s parent company, but has yet to finalize financing arrangements for the project, Patel said.

The Fairfield Inn and Suites will be SINA’s third hotel in the Richmond market and its first local Marriott brand. It also developed and owns the Candlewood Suites in Colonial Heights and the Quality Inn in Chester. SINA operates four other hotels in Kentucky and one in Tennessee, according to its website.

SINA’s Fairfield is at least the fourth hotel project currently in the planning stages in the Richmond area.

Shamin Hotels has a combination Hampton Inn and Suites and Homewood Suites project in mind for a downtown Main Street tower. Nobility Investments hopes to build a 119-room hotel at the former Skilligalee restaurant site on Glenside Drive. And the Apple REIT Companies has a six-story, 210-room hotel currently rising at Cary and 14th streets in Shockoe Slip.

I am opposed to the construction of this hotel. It will cause an already congested traffic situation at Midlothian Turnpike and Pinetta Drive to get worse, and it will consume resources (e.g., electricity, natural gas, water) with negative impact on the Brighton Green community that lies to its north. There are already several hotels in the area; e. g, Comfort Inn, Extended Stay America, and Hyatt. Why do we need another one?

Jim Blowers—–your comments are made as a joke right? Let me guess…..you either live in the area or travel through it in your one person occupied car? Look up the definition of NIMBY.

btw, hotels are the reverse and not the cause of traffic causing congestion. People who use hotels generally arrive at night, not when traffic is congested. There may be a few cars on the road in the morning but this is only common sense that other people understand.