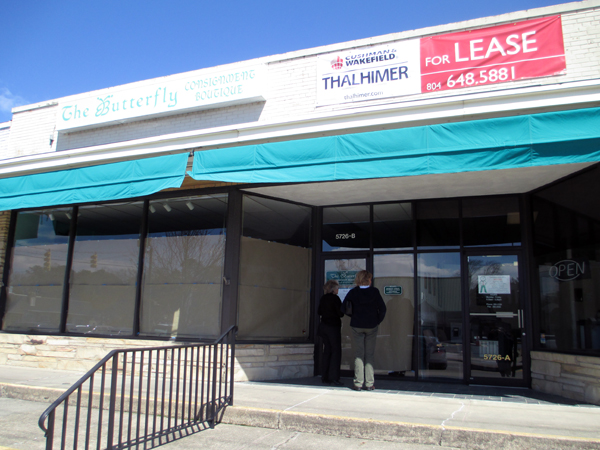 Butterfly Consignment Boutique is closed after more than 25 years in business. (Photo by Michael Thompson.)

A longtime Libbie/Patterson retailer and a newcomer in the Fan are shutting down their stores.

A sign in the window of Butterfly Consignment Boutique said the business at 5726 B Patterson Ave. is closed. It had been in business for more than 25 years.

A voice recording on the shop’s phone also said Butterfly had closed. Owner Shirley Rogers could not be reached for comment.

The Julia Frayser Robbins Family Limited Partnership owns the 2,500-square-foot space, which sits near the prime retail corner of Libbie and Patterson avenues. 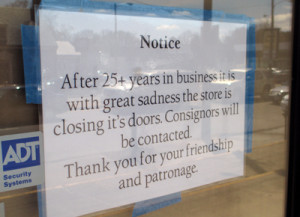 John Frayser, a partner of the ownership group, said Cushman & Wakefield |Thalhimer is handling the leasing of the property. The space next door to the former Butterfly space, now occupied by Minuteman Press, is set to become available by the end of April. Minuteman is moving to a bigger space at 1720 E. Parham Rd.

Meanwhile in the Fan, retail and consignment shop Paradigm will close down its storefront at 1301 W. Main St. by May 1 as it plans to move its operations online.

“Richmond is such a big pond and I was too little of a fish to make it, really,” said owner Lynsi Montgomery.

The change comes just weeks after Montgomery rebranded her store to Paradigm in attempt to attract more customers. It first launched in 2012 as Pieces.

“The market is flooded with consignment shops,” Montgomery said. “If I was to do it again I would specialize in men’s, women’s or kid’s clothes.” 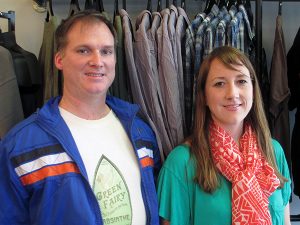 Montgomery and her co-owner and fiancé Ty Dwyer will hold sales throughout April to give patrons a chance to redeem their store credit.

Eck Enterprises owns the Fan property and Montgomery said the real estate company is looking for another retail tenant to move into the space.

Paradigm’s lease runs until the end of January 2015, Montgomery said. She is hoping another business will take over the 664-square-foot retail spot. An advertisement on Craigslist says everything in the store is up for grabs.

Consignment shops aren’t the only local retailers struggling to attract customers. Earlier this month, Champagne & Shoes in Carytown announced its going out of business sale last month. Also in Carytown, the Yarn Lounge closed in late 2013 after nine years in business. Pink, a Carytown women’s fashion boutique, closed in February.