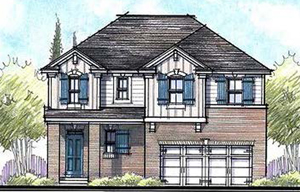 Developers are planning two new residential developments in Hanover County that will encompass more than 150 homes.

Hanover Land Investors LLC, led by developer Henry Shield, is planning to build 48 detached, single-family houses and 73 single-family townhouses on a 22-acre property near the intersection of Pole Green Road and Bell Creek Road in Mechanicsville.

An attorney for the developer said plans include commercial development for the adjacent three acres. Andrew Condlin, with the firm Roth Doner Jackson, said the space could be used house something like a pharmacy and a 10,000-square-foot shopping center.

The project could go before the county planning commission as early as April 17. Condlin said the proposed development, which has met some resistance from local residents, fits in with the county’s views for growth in its comprehensive plan.

“Hanover County has designated areas in the county for development and this is one of them,” Condlin said.

A few miles away, Hanky LLC is gearing up to build a 17-acre development off Adams Farm Road near Lowe’s on Mechanicsville Turnpike. The county recently approved the project, which calls for 49 single-family houses, developer Mike Hanky said. 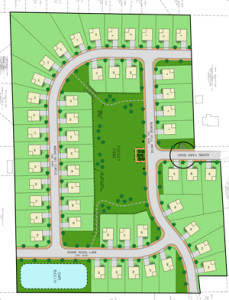 The new development, which could be named Adams Farm, is located near the Travellers Run subdivision. The Hanover County Board of Supervisors has approved the development.

Hanky said he and his brother plan to develop the property — previously a working farm — and install infrastructure. After that, they expect to sell the lots to builders, he said. They’ll likely start “pushing dirt” in late summer or early fall.

“We’re going to be talking with some of the builders in town about it,” he said.

Hanky said they haven’t selected any house models or prices.

A neighbor of the property said she remembered seeing a small graveyard on the site many years ago, Hanky said. There are no longer any markers or other indications of the cemetery, but Hanky said he’s hired a specialist to investigate. If any evidence is found, Hanky said they’ll redo the site plan to preserve the area around the cemetery.

The Hanky brothers grew up in the development business, working with their father who started JJH Corp. in the 1970s.

Hanky’s and Shield’s projects would join at least one other new development underway elsewhere in the county. Hanover Habitat for Humanity is building a nine-home neighborhood, called Bailey Woods, off Ashcake Road in Ashland.