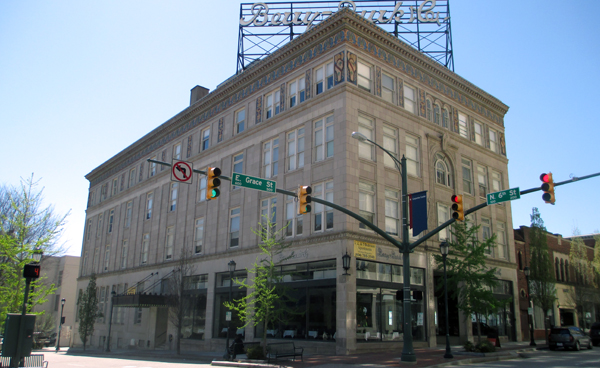 525 was the first restaurant in the Berry Burk building downtown. (Photo by Michael Thompson.)

After a two-year run, an eatery on East Grace Street has folded its linens for the last time.

The 525 at The Berry Burk restaurant closed April 19.

“There is never just any one reason,” 525 owner and operator Tom Haas said of the decision to close. “Honestly, I think someone else can do it better than I can.”

Haas, Taylor Hasty, and Ted and Jim Ukrop in 2012 opened the 5,600-square-foot restaurant at 525 E. Grace St. It was the first business to take commercial space on the ground floor of the renovated Berry Burk building, the former home of its namesake, a once-popular Richmond clothing store.

Hasty left 525 in spring 2013 and this year opened Game On Sports Bar and Grill in Midlothian.

The Ukrops led the redevelopment of the 1920s-era property, much of which was converted into apartments. Haas said 525 was designed to make the most of its proximity to Richmond CenterStage across the street at 600 E. Grace St.

“On show nights, it was packed. That worked. It’s just there are only so many shows a year,” Haas said. “We struggled to find our identity on non-show nights.”

Jim Ukrop said the future of the restaurant space is still being decided.

Haas, on April 15, announced in a Facebook message that Saturday would be 525’s last day of service.

Funny that this place dies but a block down the street Rappanannock is thriving. Cool locations cant make up for lack of service and quality. This doesnt say too much about all the economic activity Center State was to generate (besides the high dollar parking on show nights).

There are too many rehearsals and technical days at Centerstage. The ratio of public show days vs. no show days is way off.

Numerous people have cited the economic activity the Center Stage complex as a reason for the demise of 525. How about this for a reason –> On multiple occasions, 525 was closed when there was a MAJOR performance at Center Stage. Totally missed opportunity to capture hundreds and hundreds of potential customers pouring out of the venue looking for a drink or a bite to eat. I think Brian Ezzelle above is spot on when he mentions lack of service and quality. Pasture and Rappahannock are doing just fine and are just a few minutes walk down the street. A… Read more »