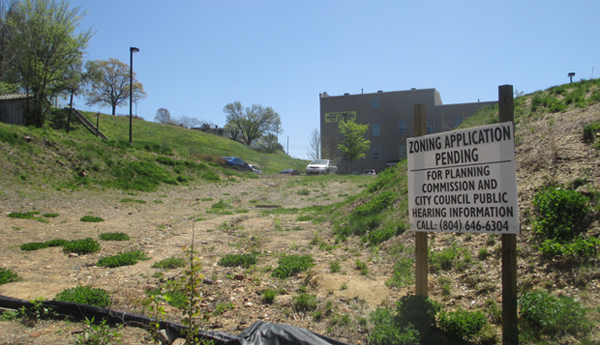 A local developer has scored a major win for his plan to add a new high-rise to Shockoe Bottom.

After nearly two hours of consideration and public discussion, Richmond’s Planning Commission gave its approval Monday to a proposed 13-story Shockoe Bottom condo building at Main and Pear streets. The project is dubbed the James at River Bend.

Its developer, David White of Shockoe Bottom real estate firm Historic Housing, next must earn Richmond City Council’s final approval of a special use permit application at next week’s meeting.

The proposed condo tower would sit at the eastern end of Cary Street. Part of the building will rise 16 stories from its lowest point on a down-sloping plot and include three floors of parking. The 13 stories of condos will begin on street level on Main Street. White said the units will begin at about 1,100 square feet with low-end prices of about $300,000 and $350,000.

The project, proponents said at Monday’s meeting, could bring much-needed homeownership to the Bottom.

“The key to us is really homeownership downtown, which is something that is sorely lacking in this city,” developer Chris Johnson said at the meeting, speaking for the Shockoe Partnership. “When residents of our downtown want to move out of an apartment, they move out of downtown.”

Planning’s approval was preceded by a lengthy debate centering on how the proposed building’s height might affect views from the Church Hill neighborhood to the east. Also at issue was the so-called “view that named Richmond.” It’s a reference to the view from Libby Hill looking east at the bend in the James River that is said to resemble the view of the Thames River from Richmond Hill in London.

White’s building will not impede sightlines looking east from Libby Hill, but opponents said the entire panorama of the Libby Hill view scape should be protected from the planned building that most argued was out of character with its surroundings.

White, on Monday, declined to disclose development costs for the project, but he said the building’s height is nonnegotiable for the development to make financial sense.

“I can’t make the numbers work,” White said. “The only way I can afford to build this building is to get the money from the height.”

Others said that the area west of Libby Hill was a mostly urban area, and White’s project would not be out of line with the downtown landscape. Planning Director Mark Olinger, who does not sit or vote on the planning commission, said a larger building could fit as a break between the river and city views from Libby Hill.

“As you sweep west, the buildings get bigger, the uses get more intense. The character and nature of that westward view is different from the eastward sweep,” he said. “If you think about the entire sweep, that place is a place where I think that kind of structure can work.”

Objections were also raised by the planning commission related to a roughly 20-space above-grade parking lot included in the plans and potential curb cutting to make way for White’s project.

To mitigate those concerns, White offered building a brick sidewalk along Pear Street from Main to the end of the James at River Bend property. But the surface parking, which sits just off Main Street, will have to stay.

“We are not able, for financing reasons, to eliminate the parking on Main Street,” he said. “We agree to have landscaping along Main Street and Pear to obscure the vision of that parking that would be on Main Street.”

Along with its 6-2 approval of the special use permit, the planning commission gave a unanimous thumbs-up to an accompanying ordinance that will close off a small, unimproved section of Cary Street just east of Pear that exists on a map more than on the ground.

If approved by city council on Monday, the James at River Bend project will be the second high-rise condo beginning to taking shape in Richmond. Mark Purcell, Robin Miller and Dan Gecker have a 10-story condominium tower ready to rise on the other side of the river at 800 Semmes Ave.

I really don’t mind a developer putting a building in that location — I don’t mind even mind the 16 stories.

What I do mind is the erecting of one of the ugliest buildings to be built in many years. The current proposal is reminiscent of the early 70s-era residential high-rise construction that brought us such gems (that’s sarcasm) as the Monroe Park Tower on VCU campus or the Hathaway Tower near Willow Oaks in southside.

Is this project not subject to architectural review?