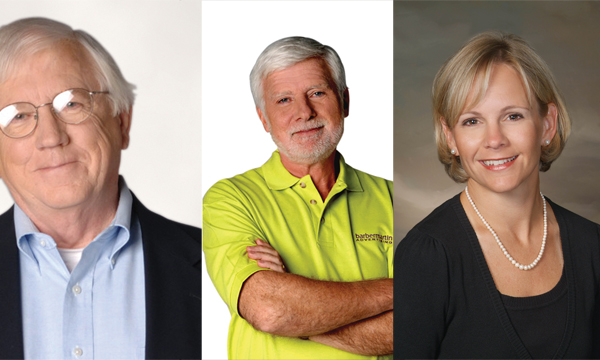 The torch has been passed at a local advertising agency.

Barber Martin Agency founders and namesakes Bob Barber and Bill Martin sold the company March 1 to its president, Robyn Deyo. Financial terms of the sale were not released.

Barber said he and Martin decided to sell the agency they founded in 1988 and retire.

Barber and Martin met while working at Richmond ad agency Brand Edmonds Bolio in the 1970s. Barber handled accounts. Martin wrote ads. And both did marketing. They parted ways for a few years but kept in touch, Barber said.

One day, out of the blue, Barber got a phone call.

“It was Bill, and he said S&K (Menswear) was looking for an agency, and I said, ‘Let’s go,’” Barber recalled. “We pitched it, we got it, and that’s what started it.”

The 74-year-old said he’s glad to leave the company in good hands.

“When we first hired Robyn, we knew we had a gem,” Barber said. “It was inevitable that she was going to move into this position. And we’re delighted that she was here to take over.”

Deyo, 42, was born in Zimbabwe and came to the United States to attend North Carolina-based St. Andrews Presbyterian College, now called St. Andrews University. She didn’t intend to stay in America but eventually found her way to Richmond and the Barber Martin Agency. She started as an administrative assistant 18 years ago and became the agency’s president in 2006.

“To be given the opportunity by Bob and Bill to start at the bottom and work my way up, it’s been an extreme honor for me,” Deyo said.

Deyo already has helped to expand the company in her time as president, Barber said. The company last year was ranked 15th on the RVA25 as one of the fastest-growing companies in Richmond. It also was named to Inc. Magazine’s 5000 fastest-growing companies list for the last two years. According to Inc.’s ranking, the agency’s revenue grew from $14.9 million in 2009 to $29.1 million in 2012.

With the sale, Deyo added CEO and chairperson of the board to her title. Barber and Martin each will retain a seat on the board. The company’s name will not change.

“I really want to continue the legacy that Bob and Bill started and to continue to grow the company,” Deyo said.