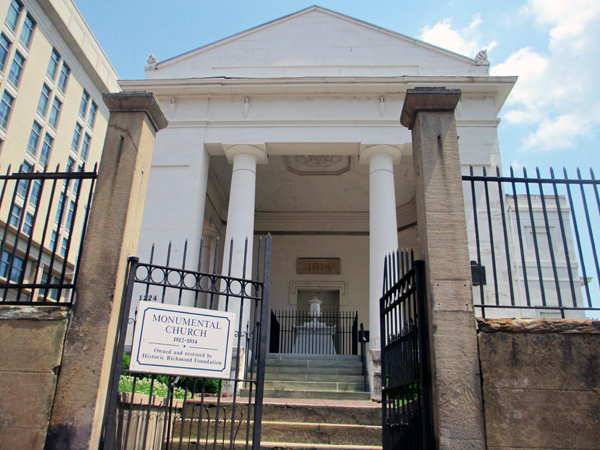 The Historic Richmond Foundation is spearheading efforts to enhance and restore the 200-year-old Monumental Church at 1224 E. Broad St. (Photo by Brandy Brubaker.)

A local nonprofit is bringing history back to life at an East Broad Street church.

The Historic Richmond Foundation, which has owned Monumental Church since 1983, is spearheading the endeavor. The nonprofit’s mission is to preserve local historic structures and spark revitalization.

“It has so much architectural significance, but it also has so much historical significance,” said Mary Jane Hogue, director of Historic Richmond. “We just could not let this building be torn down. Once it’s gone, we can never get it back.”

But saving history doesn’t come cheap. The nonprofit already has invested more than $3 million to revive the once-deteriorating structure at 1224 E. Broad St.

Artist Elaine Tucker Haviland spent six weeks this spring repainting the church’s altar and columns in the same Prussian blue-and-white faux marble scheme they had in 1814. The restoration cost $50,000 and was paid for with a donation from Neil and Sara Belle November in memory of Neil’s mother, Sara D. November, a noted local artist.

Work is also underway on an $80,000 project to install a memorial terrace on the west entrance to Monumental Church. It will be named in memory of the donors, Dr. Waverly M. Cole and Dr. John R. Cook. The terrace, which will allow easier access to the church, will include a granite timeline that chronicles the site’s history, Hogue said. 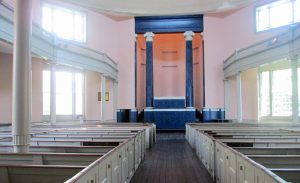 An interior shot of the church (Photo by Brandy Brubaker)

On Dec. 26, 1811, a fire destroyed the Richmond Theatre, which sat on the site that now holds Monumental Church. Hundreds were inside the theater for a play and at least 72 died, including the governor of Virginia, Hogue said.

Then-Chief Justice of the Supreme Court John Marshall led a campaign to build a church on the site of the fire in tribute to those who died. The church was designed by Robert Mills, an architect who studied under Thomas Jefferson and would later design the Washington Monument, Hogue said.

The remains of the fire victims were buried together in a crypt underneath the church that’s still there to this day.

“Everything was so charred beyond recognition. They went knocking on doors Dec. 27 and said, ‘Who didn’t come home last night?’” Hogue said. “It’s really hard to believe 72 people are buried here.”

Several years ago, Historic Richmond had an ultrasound done on the brick crypt. Inside its protective walls, there are two boxes that the foundation believes hold the cremains of the fire’s victims.

The church held its first service May 4, 1814, according to a history prepared by the nonprofit. It counted Chief Justice Marshall and Edgar Allan Poe among parishioners, and Marquis de Lafayette was honored at a special service there in 1824.

The church was deconsecrated in 1965 and was deeded to the Medical College of Virginia Foundation, which turned it over to Historic Richmond almost 20 years later.

“The whole church was crumbling because it was taking in water,” Hogue said.

Historic Richmond has completed a long list of repairs and improvements on Monumental Church, including waterproofing and repairing the badly damaged building, installing HVAC and dehumidification systems, and replicating the deteriorating monument at the church’s entrance, which was placed there in tribute to the fire’s victims.

In addition, Historic Richmond has stabilized the roof and restored its copper done, removed all Portland cement, lime-washed the exterior, landscaped the church’s grounds, replaced front portico steps, completed an interior paint analysis of the sanctuary, repaired plaster in the sanctuary, painted the sanctuary and replaced windows.

The wish list for remaining work includes redoing limestone on the outside of the building, restoring wrought iron fencing, plastering and painting the east and west porticos, and repairing outside columns. Those projects should cost about $500,000, the foundation said.

However, the church puts back some cash into Historic Richmond’s coffers as a popular wedding venue. The cost to rent the facility, which seats 250 downstairs, is $1,600. Wedding coordinator Catherine Dameron said that while the church is booked into 2016, there are a few dates still available this year.

Historic Richmond’s most recent financial report from 2012 listed revenue of $970,043, expenses of $753,509 and net assets of about $10.37 million, according to Guidestar.org. The nonprofit is largely funded by donations, Historic Richmond said. 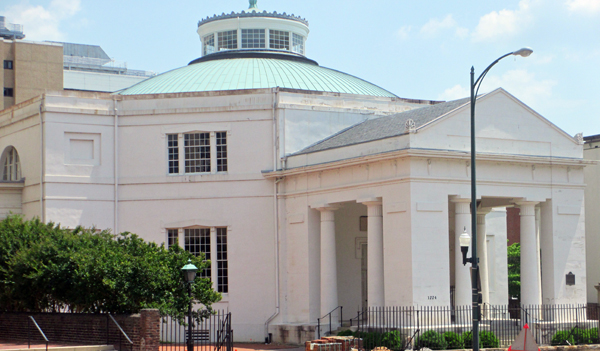 I was honestly going to make a somewhat snide comment about how $50,000 to repaint the columns and altar but after Google-ing a few pictures, I have to say the local artist (Elaine Tucker Haviland) did an amazing job.

I have no basis for comparison (and no relevant expertise) to say if that was actually worth $50,000 but I can say that the work is mind-blowingly realistic.