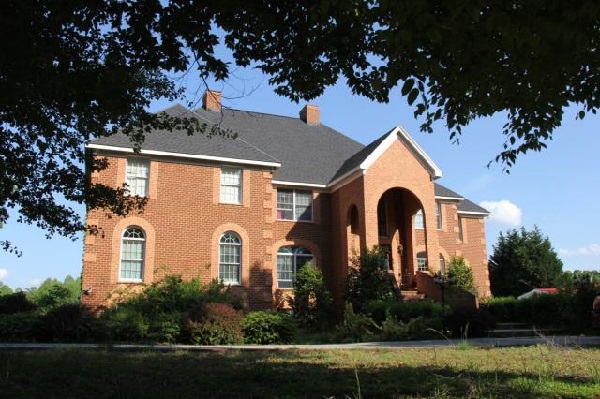 The riverfront mansion and its owners’ car collection are set to be auctioned. Courtesy of Tranzon.

A New Kent County mansion and the owners’ cache of classic cars are headed to the auction block.

The nearly 10,000-square-foot home on the Chickahominy River and 10 to 12 cars — possibly including a 1968 Mustang and several older Corvettes — are up for grabs as part of a court-ordered division of the owners’ assets.

The auction for the property will be on June 24 at the mansion, 201 Four Islands Trail in Lanexa (about 40 miles outside of Richmond). The owners are Bruce and Kathy Evers, according to county records.

Tranzon is handling the auction of the real estate. A separate online auction through eBIDLOCAL.com will be scheduled to sell the cars.

The riverfront home sits on a 1.8-acre lot in The Colonies subdivision and has an assessed value of $1.2 million, said Linda Terry, the Tranzon auctioneer handling the sale. The owners say it is now about 12,000 square feet after upgrades, Terry said. It was built in 1997.

It has a total of 7.5 bathrooms and between five and 10 bedrooms. There’s also a pool, waterslide, a pool house and a dock with powerboat and jet ski lifts.

“It’s a project house, and it’s a large house, so it’s going to take a special buyer,” Terry said.

There is no minimum bid or reserve for the auction of the home, but the winning bid must be approved by the judge.

David Staples, chief executive for eBIDLOCAL.com said the company is still determining which vehicles will be put up for sale. He expects the final inventory list to be worked out by next week and hopes to have the auction online by the end of the month.

The auction will also include some farm equipment and five or six ATVs.

“These are exactly what I would call ‘any man’ collector cars,” Staples said. “It doesn’t take the uber rich to afford these.”

I would like more information on the bidding for the cars listed at the “mansion, 201 Four Islands Trail in Lanexa “, as shown in this ad, for June 24th, 2014

This seems like an awful lot of things this couple are getting rid of……Can you please EXPLAIN “WHY” THEY ARE AUCTIONING ALL OF THIS OFF??? PLEASE ANSWER ME SOON AS YOU CAN. THANK YOU.