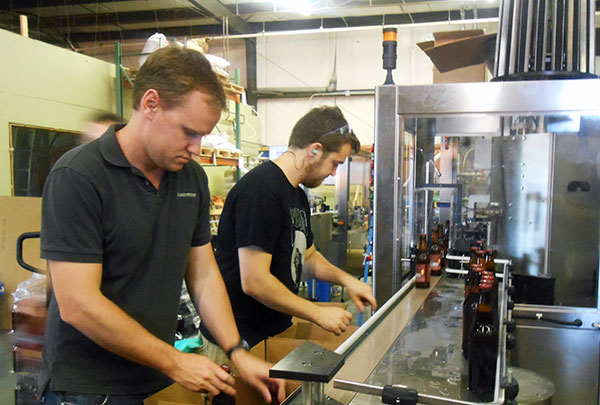 One of the frontrunners in the local beer scene is jumping the state line to tap into a new market.

Hardywood Park Craft Brewery signed a deal this month with a distributor to get its full line of beers on taps and store shelves around Washington, D.C.

The D.C. rollout started with about 70 kegs of Hardywood’s flagship Singel and comes eight months after co-founders Eric McKay and Patrick Murtaugh first ventured out of Richmond with a distribution deal in parts of northern Virginia.

“There are a lot of people who live in Arlington and Alexandria and the immediate area around D.C. that were being introduced to Hardywood,” McKay said. “We really started getting calls from some of the restaurants and bars in D.C. proper who expressed an interest.”

Premium Distributors of D.C. will take Hardywood to market in Washington. It’s the first distributor Hardywood has signed on with other than Richmond-based Brown Distributing, which handles Hardywood’s account locally and in Northern Virginia.

Brown’s portfolio includes all of the Richmond area’s local breweries, but it does not operate in Washington.

Hardywood will join Legend Brewing Co. as the only Richmond brewery so far to take its product out of state. Legend previously expanded into North Carolina. 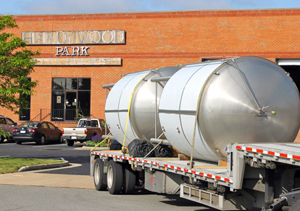 Hardywood has expanded its capacity since it opened, including adding larger tanks and a bottling system. Photo by Burl Rolett.

Benjamin Petty, Hardywood’s sales manager, said the brewery has secured about 20 or 25 fulltime tap lines with a number of other rotating taps throughout D.C.

Petty expects competition will be stiff in the D.C. market, where it’s tougher for smaller brewers to get into bars and restaurants. For example, it’s illegal in Virginia for breweries and distributors to offer free kegs to restaurants to try to secure tap space. In D.C. the practice is legal, and Petty said it’s often expected.

“There is some pay-to-play that goes on in D.C., and as a small brewery, that’s something we find hard to do,” he said.

Hardywood will look to hire a fulltime sales rep to try and establish a foothold in Northern Virginia and Washington. It will also look to continue pushing its brand’s reach.

“Maryland is a possibility, in that direction that seems like the next logical step,” Petty said. “But we have some expansion plans before we do Maryland.”

In preparation for distributing outside of Richmond, Hardywood spent about $600,000 for new equipment late last year including new tanks, a centrifuge and a whirlpool. That’s in addition to a $500,000 investment the company made in a bottling line to start producing six packs last September.

Hardywood is on pace to make about 8,000 barrels of beer this year. Petty estimated they could push that to about 15,000 barrels on their current brew schedule, which has Hardywood making beer three or four days a week without brewing nights and weekends.

Brewing runs in a morning and afternoon shift, usually manned by six employees. Three more employees and some volunteers help package products. The company just hired a new brewer and has another starting in a couple of weeks.

With its current set of equipment, Petty said Hardywood’s Ownby Lane brewery could potentially power up to 25,000 barrels per year if Hardywood needed to put in extra hours.

“The more we brew and the more we expand, we will have to bring on at least another shift,” Petty said. “Or we will do some weekend or evening brewing, though we’d prefer not to.”

Not sure about the second brewery for out of state distribution. Spotted some Lickinghole Creek at store on vacation in North Port, Florida: http://twitpic.com/e6k3ca

Though since Lickinghole is out of Goochland and not Richmond, I suppose it doesn’t count! Maybe I’ll learn to read one day…