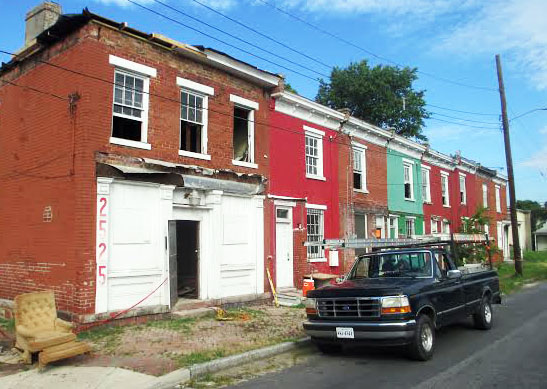 Deanna Lewis found something in a crumbling Church Hill block that she couldn’t ignore.

Within the derelict exteriors of its seven small row houses, a broken-down general store and a vacant lot, Lewis saw an opportunity.

“I had driven past the block for seven years,” she said. “Although it was vacant, painted multicolor and boarded up, there was just something about it that would turn my head.”

So she bought the entire block.

Lewis paid about $159,000 for the properties between 2511 and 2525 O St. She said the structures – many long vacant and some condemned – were built in the 1870s by James Netherwood. Netherwood was a popular local contractor who built many monuments around Richmond, including the Robert E. Lee statue on Monument Avenue.

Lewis plans to recreate the block as updated single-family homes.

Lewis plans to restore the O Street buildings and sell them as single-family homes.

“I could bulldoze everything and build new, but that’s not in my nature,” she said. “There is value in keeping the past. You won’t see this again. Nobody builds like this anymore.”

Lewis estimated that she’ll spend at least $800,000 on the project, including purchase, restoration and construction costs. She’s financing the project with a line of credit from EVB and plans to apply for state historic tax credits.

A few of the properties had been for sale for more than six months when Lewis made an offer in December.

“I took a calculated gamble and bought the three, and then began to work with the owners of the remaining five,” she said. “Happily, for some reason after all these years, they all wanted to sell.”

Lewis’ row of houses looks especially shabby – for now, at least – compared to other nearby blocks that have been fixed up by groups like Better Housing Coalition.

She said her plan to restore the O Street buildings is being applauded by the neighbors.

“When the guys are out there working, people driving by roll down their windows and say ‘woo-hoo!’ and give them a thumbs-up,” Lewis said. “That’s what Church Hill is about. People say hi and thank you.”

Lewis’ crew is trying to restore the original brick from below multi-colored facades. And Lewis is working with the city to get permission to remove modern light posts in favor of old-fashioned street lights. 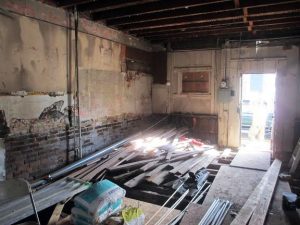 The building that housed a general store in the late 1800s will be renovated as a three-bedroom home. Photo by Brandy Brubaker.

The former general store is about 2,000 square feet. Lewis said she’ll turn it into a 2,800-square-foot, three-bedroom, three-bathroom home and list it for somewhere between $225,000 and $300,000. A similar-sized home will be built on the property’s vacant lot.

All of the homes will have off-street parking.

Lewis, who owns the development company Deworth Restoration Associates and renovation company Heirloom Restorations, said she anticipates that the general store and a couple of the smaller homes will be ready to sell by October.

The renovated houses will qualify for the city’s 10-year tax abatement program, which will greatly reduce real estate taxes owed for 10 years after Lewis’ purchase, she said. That benefit will be passed on to whoever buys them.

“They’re unique. They’re going to be energy efficient. The tax abatement is incredible,” she said. “I am going to restore them to last at least another 100 years.”