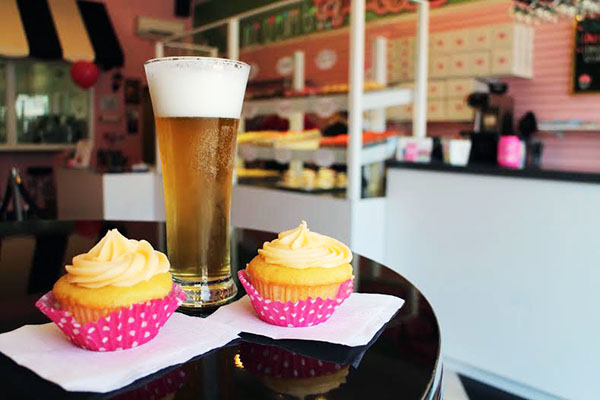 Carytown Cupcakes customers can now enjoy a beer with their dessert. Photos by Michael Thompson.

Dawn and Albert Schick wanted to offer a different sort of buzz to go with the sweets they serve at their 5-year-old Richmond bakery.

But they were hamstrung by state law.

So the owners of Carytown Cupcakes traded in their baker’s hats for lobbyist caps and helped bring about the passage of Senate Bill 502, a change to Virginia ABC law that expands the sorts of boozy beverages a bakery can serve.

The amended law went into effect July 1, and the Schick’s shop at 3111 W. Cary St. began selling beer and wine this month along with its bevy of specialty cupcakes.

“We had to find a law that we could start with,” said Dawn Schick. “Our purpose is to serve some of our cupcakes with some of the craft beers and wines that are in some of our cooking already.”

Prior to July 1, bakeries in Virginia were only allowed to sell cordials and dessert wines. That didn’t suit the Schicks, who use other alcohol like Hardywood Park Craft Brewery beers in some of their cupcakes. 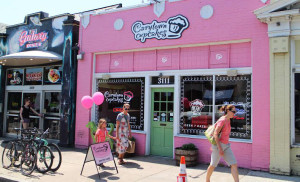 The husband-and-wife team asked former Virginia Sen. Mary Margaret Whipple, a friend of the family, if she knew anyone who could help with their legislative hopes. Whipple directed the Schicks to Sen. Barbara Favola, who represents parts of Arlington, Loudon and Fairfax counties.

“She is the one who has kind of been baby-stepping us through the process of what to do,” Schick said of Favola. “She began working on our behalf.”

At first, Favola tried to see if an exception could be made for Carytown Cupcakes. Favola sits on the Committee on Rehabilitation and Social Services, which oversees the state’s Department of Alcoholic Beverage Control.

“We talked to the ABC folks to see if it could be done administratively with a waiver,” Favola said of letting the bakery offer beer and wine. “They were very uncomfortable with that, so I put the bill in.”

The bill allows bakeries to have 10 percent of their gross annual sales come from beer and wine on-site consumption. Favola said the 10 percent limit is the same for restaurants.

“The restaurant people were a little anxious because they didn’t want competition,” Favola said.

Favola introduced SB 502 to the General Assembly in March. It passed unanimously. 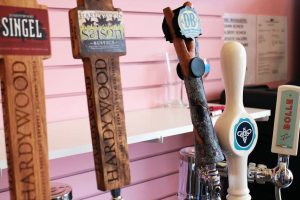 Carytown Cupcakes has on tap beer from Hardywood and Devils Backbone and Blue Bee Cider. Sparkling, red and white wine is also available.

“I think it’s really helpful to a community to have a nice little place to grab a quick bite and stay for a while to create a street presence,” Favola said. “Sometimes if something does no harm, you get legislation through the General Assembly.”

The bill’s passage hasn’t seemed to cause much a stir among other area bakeries. Jamyce Vinson opened Sweetopia, a bakery at 221 E. Clay St. last year. Vinson said she wasn’t aware of the bill, but that she would consider serving alcohol in her Jackson Ward bakery.

Emmanuelle Bindas of Jean Jacques Bakery at 3138 W. Cary St. also said she hadn’t heard of the law but would look into it.

Carytown Cupcakes appears to be the only local bakery taking advantage of the changes, for now.

“We’re not looking to be a big bar, we’re just trying to finish that experience at the end of the night for people who want to have a cupcake and a glass of Prosecco,” Schick said.

It was great to work with Dawn and Albert Schick on this project. Mary Huffard Kegley of the Retail Merchants Association and the Virginia Retail Federation was so helpful in assisting with the Lobbying efforts. We are looking forward to being there when the Governor signs this bill into law!

Here’s hoping the donut places can get in on this too… I’m tryna get my Homer Simpson on.

Why does everything have to have alcohol attached. Have a good time or enjoying something doesn’t always have to include alcohol. However, it seems that way all around Richmond lately. Apparently alcohol Is the “in” thing for everybody nowadays. Had a bad day, have a drink. Had a good day, have a drink. What are we teaching our children.

While I commend the shop for helping to shape and modernize Virginia’s often archaic laws, I agree Carytown has begun divorcing its boutique roots in favor of a neighborhood for drunkards. Additionally, I don’t necessarily think Carytown Cupcakes will attract such clientele, but its certainly not thinking outside of the box. Cupcake and doughnut shops are a dime a dozen these days, and as the trend fades, profits must be supplemented.

Alcohol is no more evil than a cupcake. Alcohol can be/should be considered a sensual delight just like a cupcake. Those who oppose alcohol just because it’s alcohol are missing the big picture.

I don’t understand how this is a law to begin with, but even more perplexing is who would drink beer with a cupcake?!

Maybe I’ll think differently if I try it, but I just can’t imagine why someone would want to drink a beer with a cupcake. Maybe they’re hoping people will come in for one or the other? Oh well, to each his own.

Good for you Carytown Cup Cakes! I love businesses that think outside the box!