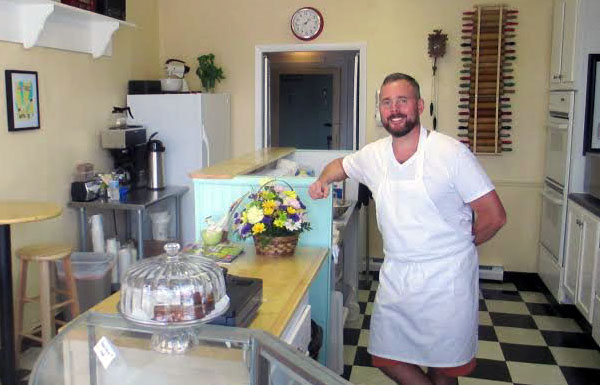 Tim Laxton is using his grandmother’s biscuit recipe and a 150-year-old rolling pin to fulfill a longtime dream.

“It’s been a dream of mine my entire life to do something like this,” said Laxton, 48. “This all happened quite serendipitously.”

Before taking up the rolling pin, Laxton owned his own pool and spa company in Middlesex County for about six years. Then late last year he was struck by a nighttime inspiration to start his own bakery featuring his grandmother’s biscuit recipe.

“I sat up in my bed back in November and had this huge idea that I’m going to make biscuits,” Laxton said. “It was just a crazy idea.” 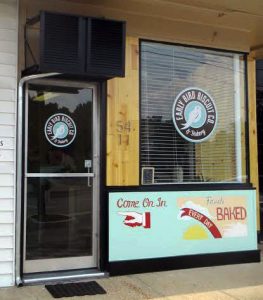 Early Bird operates out of a small space on Lakeside Avenue.

In February, Laxton drove by what would become his bakery. It was a 378-square-foot space tucked between a magic store and TV repair shop. Laxton eventually wound down his pool business, leased the space and with $10,000, opened Early Bird.

“I just sank my entire future into this place,” Laxton said.

The shop was built with repurposed or recycled materials, Laxton said, and he designed the shop himself. The fixtures came from Habitat for Humanity’s ReStore, a shop that sells used furniture. Laxton used cabinet doors to make a display case.

“I collect a lot of stuff and wanted to pour my spirit into the place,” Laxton said. “I wanted to hold onto the mid-century feel of the place and play up the 50s and 60s feel.”

Some parts of Early Bird date back even further. Laxton said the rolling pin he uses was hand hewn in the 1860s by his great-great grandfather.

“I have a feeling there’s a little bit of magic in this,” Laxton said.

Early Bird is open from 7 a.m. to 6 p.m. Monday through Saturday. Laxton is going it alone for now and gets to the shop each morning at 5 a.m.

Laxton said he thinks a good biscuit is hard to find in Richmond and hopes to lure residents from across the region.

Laxton described the techniques he uses to make his biscuits as intense. The key to their taste is pretty straightforward.

“Quality ingredients and lots of butter,” he said.

Nothing better than grandma’s recipe biscuits! I ate 3 there yesterday and will be back for many more. Thanks Tim for sharing your talents. YUM.

I hope you are a huge success Tim! I certainly will be in for a visit. There is nothing more inspirational than seeing someone follow a dream and pour their heart into it. I just liked your facebook page & will share with everyone I know. BEST OF LUCK!
https://www.facebook.com/pages/Early-Bird-Biscuit-Co-Bakery/787115894661264?fref=ts