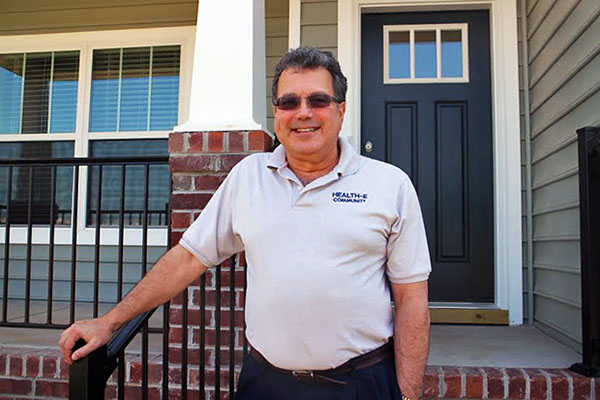 Jay Epstein stands in front of one of the homes in the Villas at Rocketts Landing, a solar-powered development. Photos by Brandy Brubaker.

A residential developer is building a new neighborhood with an amenity few can boast: every house in the community will be powered by the sun.

Jay Epstein and his firm Health-E-Community Enterprise of Virginia have launched the Villas at Rocketts Landing at Orleans and Williamsburg roads. He says the 45-home development will be the state’s first solar-powered subdivision.

Hitting that price range while incorporating solar in each home is a strategy Epstein said helps him stand out in the busy Richmond residential market.

“It will make an impact,” he said. “All of the sudden, we’ve brought these homes down to a price range that people can afford. I think I’m doing something different than other guys out there.” 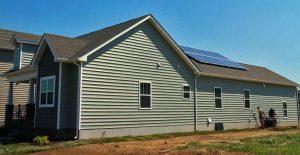 The roof solar panels will provide power to the 45 homes.

The homes will use rooftop solar panel systems of 4.2 or 5.2 kilowatts. The systems add about $22,000 to the cost of each house.

The electricity collected by the panels provides power to the house. Any surplus electricity goes into the power company’s grid, and the company pays the homeowner the going surplus rate.

Epstein is guaranteeing that the houses will have electric bills of no more than $365 a year – and electricity is the only source of power in the houses. The average non-solar home’s electric bill is about $2,058 a year, he said.

Epstein has made a career building energy-efficient houses. The Williamsburg resident’s resume includes 800 houses in the Hampton Roads area. But this is his first foray into solar power.

The idea began with a question from his son, a student at Hampden–Sydney College.

After 14 months of design work, they were ready to start building. Two houses at the Villas are finished and another is nearing completion. Epstein is hosting a ribbon-cutting ceremony there at 11:30 a.m. Tuesday. 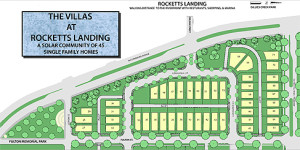 Courtesy of Health-E-Community Enterprise of Virginia

Epstein said he’s investing about $1.8 million into infrastructure at the site and expects construction to cost close to $10 million. He’s financing the project with C&F Bank.

The houses each have three bedrooms and two or 2.5 bathrooms. They have large brick porches, first-floor owner’s suite options, and nine-foot ceilings on the first floor.

The location may also be a selling point. The Villas are within walking distance from Rocketts Landing mixed-use development.

“I looked at this location: close to the James, in between two parks,” Epstein said. “I looked at it as a diamond in the rough and I knew it could be a community.”

Epstein said he thinks the solar concept will catch on now that he’s come up with a way to make it affordable by improving energy efficiency. He said he plans to continue building solar homes in the future.

I don’t know Jay, but I’ve got to hand it to him to guarantee a maximum electric bill with the sale of each house. I wish him luck in his sales and hope to hear from him more in the Richmond community.

Hats off to Jay for taking a lead in building with solar.

Congratulations, Jay Epstein! We need more developers like you to recognize the profit in solar energy! And better support from Dominion Power, through pressure from the state if needed, would also be nice!

I recently rented a home off of Williamsburg Rd with my boyfriend. This subdivision is along our drive to and from work everyday and I’ve been watching the first three homes be built with much anticipation. When the panels finally went up on the first house the other day, I couldn’t wait to go home and share the news. I think it’s incredibly inspiring for Richmond and Virginia. I hope Mr. Epstein’s model becomes a standard in development and I really hope to enjoy a home like that myself someday. Thank you for covering this!

If you think I am biased come by and see for yourself. These are the most innovative and energy efficient homes in Virginia. As the Realtor for Health-E Community, I’ve have the opportunity to see these homes constructed from the outside…in, and there’s nothing like it elsewhere. Jay has raised the bar as it pertains to quality affordable housing, energy efficiency and enhanced air quality. Our Ribbon Cutting is tomorrow 8/19/2014, 11:30AM – 1:30PM. I’ll be there to greet you.

Cool! I read about a subdivision like this in Sacramento, that also used geothermal heat pumps and other green technologies…. over ten years ago.