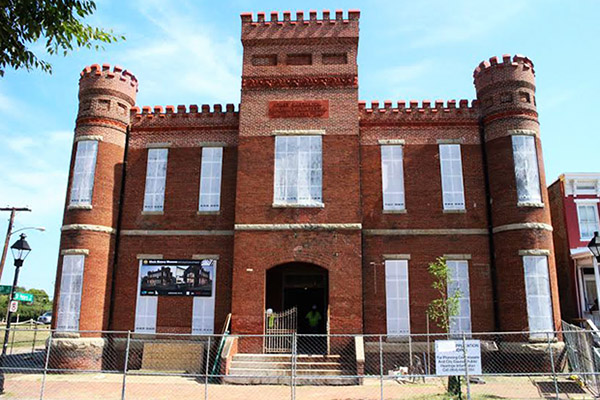 The Leigh Street Armory, a significant landmark in Richmond’s African American history, will be renovated to house the Black History Museum. Photos by Brandy Brubaker.

Construction is a go at a local museum’s future home.

The historic Leigh Street Armory in Jackson Ward is being transformed into the new Black History Museum and Cultural Center of Virginia. Work on the property officially kicked off Tuesday.

The museum hired developer The M Cos. and Emerge Construction Group for the project that is expected to take about 11 months. 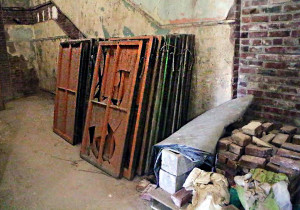 Workers carefully removed and numbered each of the armory’s windows on Tuesday. The museum has opted to restore the windows instead of replacing them to maintain the building’s historic character.

Stacy Burrs, chief executive of the museum, said the project cost will total about $13 million – $8 million for construction and the rest for an endowment and operational costs. He declined to say how much the organization has raised so far.

Burrs said it is “an amazing sensation” to get construction going after months of delays for design and permits.

“The old saying is you measure twice and cut once, and we’ve been doing that,” he said.

Mike Hopkins with The M Cos. said the firm will hire 70 to 90 people over the course of construction.

Built in 1895, the armory was home to the First Battalion Virginia Volunteers Infantry, Richmond’s first African American regiment, according to the National Park Service. The structure was later used as a school, as temporary housing and a recreation hall for African American troops during World War II, and as a school again until the 1950s.

The History of the Armory stopped at 1950. I would like to know if the building was used by the Richmond Howitzers, National Guard Unit that was activated during the Cuban crisis and sent to Fort Campbell, KY.

I am so excited to see this renovation taking place. When I was in middle school (B.A. Graves MS), which was across the street, our health and P.E. classes were held in this buiding. That was in the early 1970s. I dominated the volleyball court in that bulding. 🙂