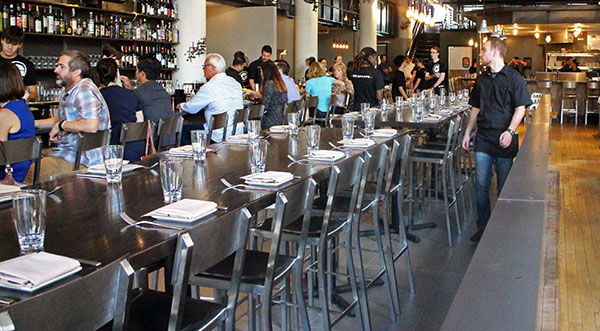 An anticipated downtown restaurant owned by a celebrity chef and some big Richmond names is open for business.

The 6,700-square-foot space was previously home to Popkin Tavern, which closed in February. Graffiato has a 10-year lease on the space.

Isabella said in February he hoped to get Richmond’s Graffiato open in the spring.

“There was a little more work than we thought,” Isabella said this week. “Restaurants never open on time.”

Fultz Architects and Shari Perago with Habitus Interiors designed the space. R.S. Brightwell Construction was the general contractor on the renovations. Isabella would not say how much it cost to get Graffiato open.

Isabella, known for his time on the show “Top Chef,” owns three restaurants in Washington, D.C., including the original Graffiato. He has another restaurant in New Jersey and two others in the works in Northern Virginia.

Staples, who owns restaurants in Baltimore and the D.C. area, also has another Richmond concept in the works. She is teaming up with another Top Chef celebrity Bryan Voltaggio to open Family Meal at the Shops at Willow Lawn. It will be their seventh restaurant together.

Croxton owns Rappahannock at 320 E. Grace St. He is opening a new concept called Rocksalt in Northern Virginia, as well as GWARbar at 217 W. Clay St. in Jackson Ward. Croxton also is working on a restaurant called Ghost Shadows at 506 W. Broad St., a property that is owned by Staples’ husband Jonathan Staples.

“We’re excited about opening this up and seeing how it goes,” Isabella said. “Hopefully if we do well, we may see more concepts around.”