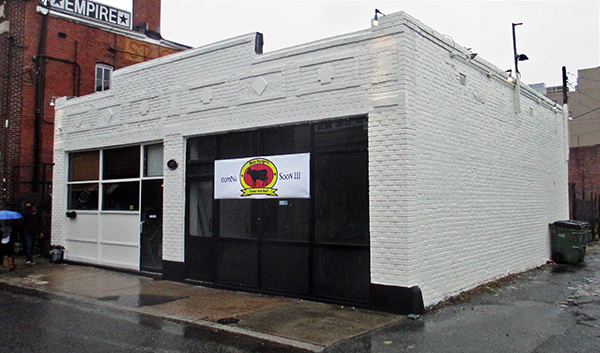 Moo Burgers will fill the space that Nile Ethiopian left near VCU. Photos by Michael Thompson.

Moos will soon be heard in Ram country.

Moo Burgers plans to open its first location next month in the former Nile Ethiopian restaurant space at 309 N. Laurel St. near VCU. The 1,500-square-foot space, which is just around the corner from a Five Guys Burgers and Fries, was left empty when Nile moved to Carytown in July.

The 114-year-old North Laurel Street property is owned by Getaneh Wondemaghew and Girmachew Tesfaye, who are working with Jon Soto to launch Moo Burgers.

Two other locations are planned for Washington, D.C.

“We’ve always had this concept,” Soto said. “You see a Five Guys down there, but you don’t really see (this) type of concept. You’re finding that D.C. flair now in Richmond.”

Soto said the expansion of Richmond’s restaurant scene persuaded him and his partners the time was right to launch Moo Burgers, and more Richmond locations may be in works.

“We hope to open five or six this year,” Soto said. “We are looking at Midlothian also.”

The Moo Burgers venture is being financed with money from Wondemaghew and Tesfaye’s businesses in Northern Virginia and Washington, D.C., where the pair own real estate and parking garages, Soto said. He would not say how much they are investing to launch it.

Soto said Wondemaghew and Tesfaye started the original Nile in Washington, D.C., before passing the concept on to its current owners. Soto said he’s opened several restaurants in Northern Virginia and D.C.

Moo Burgers will be open from 11 a.m. to 10 p.m. Monday through Thursday and 11 a.m. to midnight on weekends. Its beef will come from Middletown, Va.-based Blue Ridge Meats.