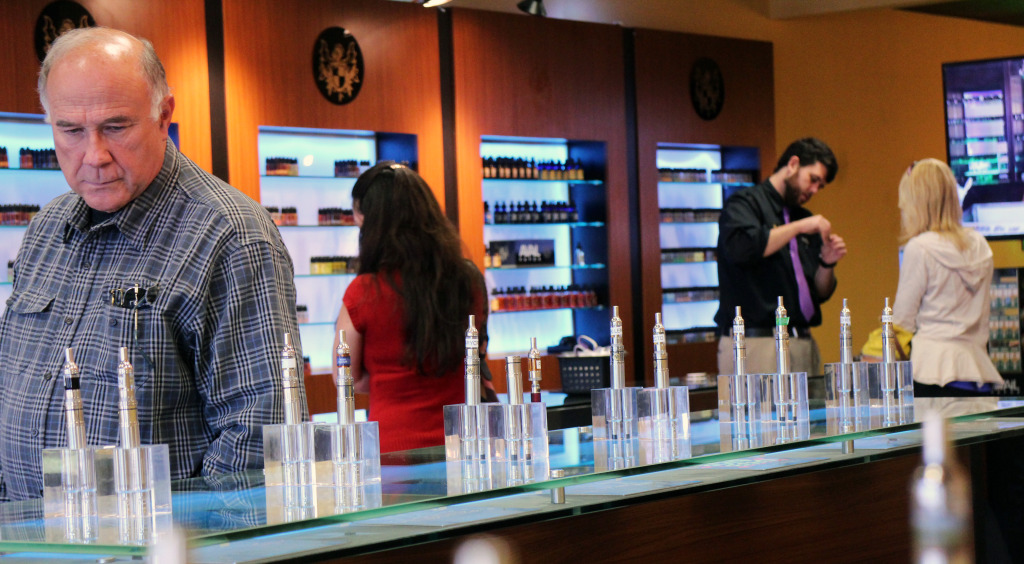 Dozens of new stores in the next two months.

The company, which opened its first retail shop in Carytown last year, already has 23 stores open around the Mid-Atlantic. Xu said Avail plans to open another seven stores by November in Virginia Beach, Hampton, Midlothian, and North Carolina.

But Xu isn’t stopping there to catch his breath. 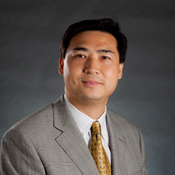 “We basically right now have entered super-fast growth mode,” Xu said. “We only plan to dial it up. I haven’t thought about dialing it down.”

By the end of 2014, Avail plans to have a total of about 50 stores open. That will include stores in the Washington, D.C. area, North Carolina, Tennessee, and more than a dozen around Virginia with seven in the Richmond market.

Xu, who owns the company with Donovan Phillips and Cole Smith, wouldn’t discuss revenue or how much the company is putting into its expansion. He did say it costs between $100,000 and $200,000 to open a new store, and the company is financing all of its growth on its own despite being courted by plenty of investors.

“With our organic growth, we can sustain 10 stores a month,” Xu said. “We have so many investors calling us because this is a hot category, but we’re not ready to make that move yet.” 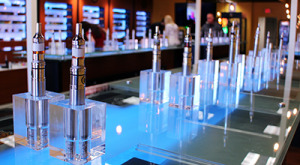 Craig Suro, one of the few original backers of Avail, is Xu’s adviser and hunting partner. Suro said he’s always been impressed with the “unadorned aggression” in the market shown by Southside-based Evergreen Enterprises, which Xu helped launch in the early 1990s. Evergreen sells wholesale home and garden decor items.

Suro, a local investor and former Virginia assistant secretary of health, said he found that electronic cigarettes seemed to be less harmful than traditional cigarettes and that the industry was growing.

“As an entrepreneur, anything that’s new and breaks the mold, I’m interested in,” Suro said. “It took on a life of its own; the market determined it.”

Satisfied that Avail’s model has worked in different markets like Carytown and Short Pump, Suro said now is the time for Avail to heed the mantra of his late father-in-law and former Circuit City CEO Rick Sharp.

“You do it right, you do it hard, and you don’t make any apologies for it,” Suro said. “Don’t look back and don’t question yourself.”

Suro said getting storefronts to new markets early-on is one of the best ways to market a brand and retain customers as competition increases.

Along with the added locations have come more traditional marketing efforts. Drivers along interstates 64 and 95 may have noticed the Avail name cropping up on billboards.

This month Avail set up a machine outside its Carytown store to demonstrate the differences between smoking traditional cigarettes and vaporizing. 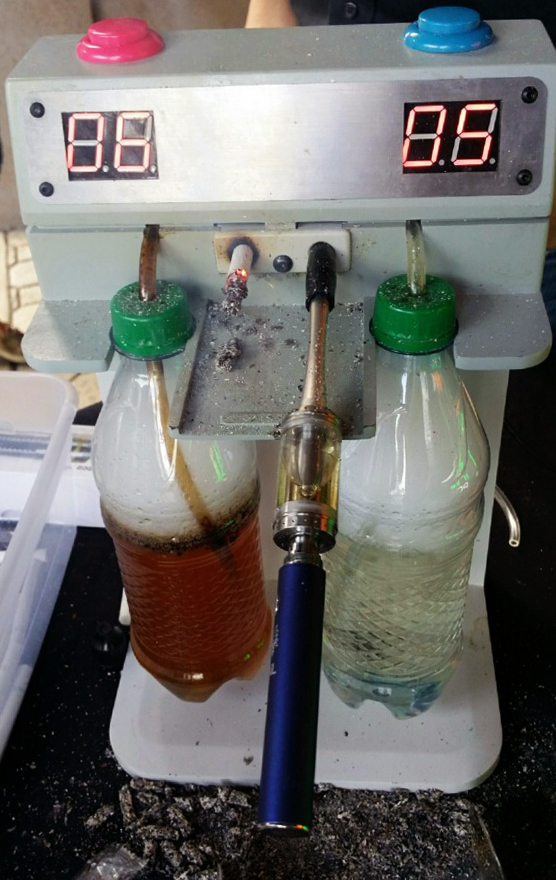 Avail’s demonstration rigged up a “puffing machine” in Carytown that filters smoke from traditional cigarettes (left) and e-cigarette vapor through bottles of water. The bottles show buildup after the machine smoked four packs of cigarettes. Courtesy of Avail.

“It was not scientific research or anything, but visually you could see what will happen to your lungs and your wallet,” Xu said. “We had customers on the spot. After the demo, they dropped their last cigarette and walked right in.”

As fast as Avail’s growth has occurred, it has not been without a controlled strategy. Xu said the company chooses where to open new stores based on a map of the country’s smoking population published by the Center for Disease Control.

Xu was quick to add that Avail does not make any health claims about its products. Such claims would leave open the possibility of electronic cigarettes facing tighter regulations as medical devices, which some say could hamper the $3 billion industry.

Xu said Avail is avoiding expanding to the Northeast in states like New York and New Jersey because of tighter regulations in those states. New York City prohibits the use of e-cigarettes where traditional smoking is banned. Electronic cigarettes only just started being federally regulated in June, but some critics have called for tougher regulations on labeling and marketing.

In addition to the Carytown location, Avail has local stores open in Short Pump and Colonial Heights. The Short Pump location was recently redesigned and will serve as the template for future stores. The new Midlothian store will open inside Avail’s 37,000-square-foot headquarters that it opened in June.

Stores at Virginia Center Commons mall and near the airport are under construction. Xu said the company has been approved to begin franchising but has held off to maintain control of branding and product quality.

“The next phase is definitely Tennessee, South Carolina, Georgia, and Pennsylvania,” Xu said. “We know how to grow and we know how to handle it.”

Correction: A previous version of this story stated that Avail will have 80 stores open by the end of 2014. The company is on pace to have 50 by the end of the year.