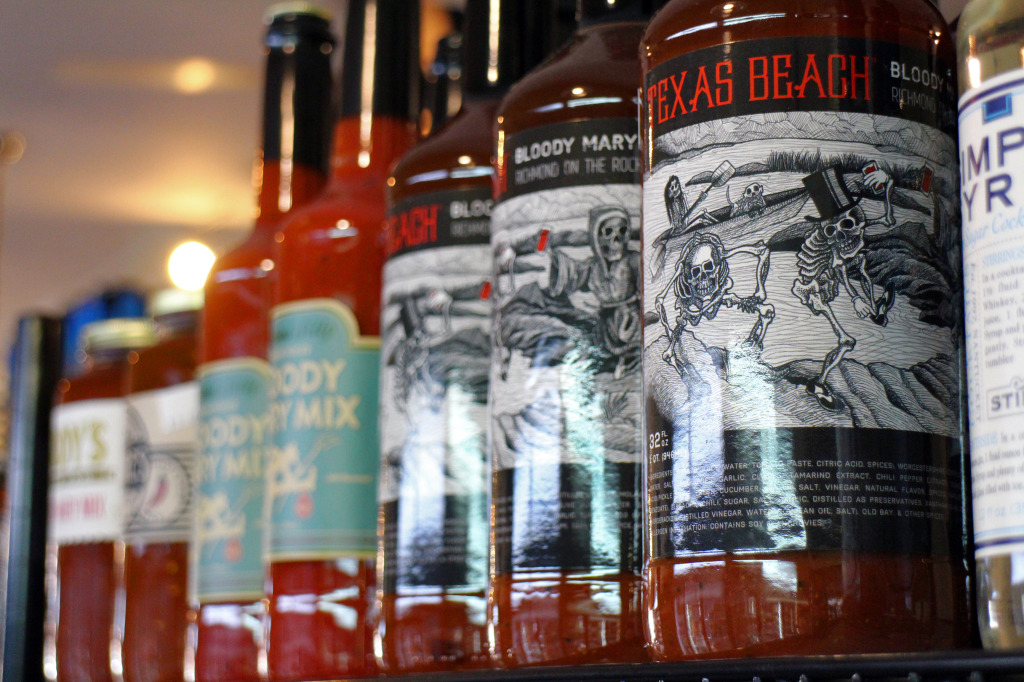 Harvest Grocery and Supply is one local retailer that carries a new line of local Bloody Mary mix. Photo by Michael Thompson.

Two William and Mary alums want to bring the beach to brunch.

The pair met at William and Mary and stayed in touch over the years before both landing in Richmond. The idea for the business came from a shared love of Bloody Marys and some friendly competition.

“A year ago for New Year’s, we invited a bunch of friends over and had a Bloody Mary contest,” Green said. “This one we have available is the winner of that contest.”

To date, the startup has sold more than 700 bottles in shops around town, Green said. Texas Beach Bloody Mary Mix is available at Patterson Market in the Museum District, Church Hill’s Union Market and Harvest Grocery and Supply and Lombardy Market in the Fan. Green said a 32-ounce bottle of Texas Beach sells for about $9.

Green said he is also meeting with restaurants including Olio Bistro in the Fan and the recently opened GWARbar in Jackson Ward to get the mix in front of the weekend brunch crowd. Plans are in the works to launch online sales through Texas Beach’s website.

“It is sort of in the development phase at this point,” Green said. “It’s just about reining people in.”

This month the pair plans to produce and bottle 300 gallons of the mix at a Virginia Beach facility, yielding about 1,500 bottles. For their first batch, they made 175 gallons for 800 bottles. They store their inventory in a West End warehouse that a friend lets them use.

Green said it cost $15,000 to launch Texas Beach Bloody Mary Mix. He and White are financing the venture with help from family members.

Green said he hopes to handle the bottling locally, but he hasn’t found the right equipment in Richmond. But he said he and White hope to eventually change that themselves.

“Part of the plan with this company is to open a bottling line and help other people in town bottle up the special sauce they made,” Green said. “We want to become a co-packer eventually.”

And Texas Beach Bloody Mary Mix won’t be a one-drink pony. Green said a “dry-hopped” Bloody Mary mix and a kimchi version are both in the works.

The company also won’t be without local competition. Over the summer, two University of Richmond graduates launched Spider Specialty Foods and their own Bloody Mary blend called The Bloody Spider. And a Goochland couple recently brewed their first batch of Huntsman Premium Bloody Mary Mix, according to a Richmond Times-Dispatch report.

Both Texas Beach and Huntsman use the same Virginia Beach bottling company, Ashburn Sauce Co. The Bloody Spider uses a plant in Farmville.

Green said he tries every new Bloody Mary mix he comes across and thinks Texas Beach can compete. Illustrator Brad Douglas and graphic artist Rob Wooten developed the art for the company.

“I just think ours is a lot more diverse in its flavor profile,” Green said. “Also, I think our branding sets us apart.”

The name, Texas Beach, is a salute to a beach along the James River in Richmond. Green said he and White chose the name because of how much time they spend relaxing on the park near Maymont.

“It’s a great cross section of Richmond.” Green said of Texas Beach. “There’s no doubt about it that are some colorful characters down there.”

Great photo! Would love to get a bottle down in New Orleans.

Hey Tess you sure can! They sell it online.