Thomas Hamilton & Associates, a local hospitality architectural and interior design firm, recently provided services for the renovation of the historic Inn at Wise in Wise, Va.

Bank of Lancaster opened a new branch in December.

The Bank of Lancaster, a subsidiary of Bay Banks of Virginia, held a ribbon cutting at its new Patterson Avenue branch on Dec. 15. The bank will open a location on Robious Road this spring,.

Williams Mullen announced the implementation of a new diversity fellowship this year in an effort to recruit, retain and advance attorneys who contribute to the diversity of the legal profession.

Twelve associates with LeClairRyan were recently promoted to partner positions, and seven partners promoted to shareholders of the firm, effective Jan. 1. Those promotions include attorneys from 10 of the firm’s 24 offices nationwide. 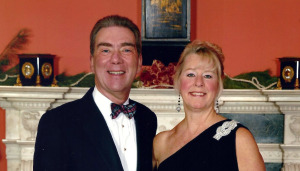 The Virginia Repertory Theatre announced a leadership gift by Mary and Ted Linhart of $50,000 to establish the Muriel McAuley for New Works and Contemporary Theatre. The funds will support the staging of contemporary works and will bring in new artistic designers, directors and actors.

Capital One provided a $175,000 grant to FeedMore to support hunger relief in Richmond in late December. The bank also recently launched a food donation program with the Restaurant Associates and Sodexo to donate unserved food to those in need.

On Dec. 23, the Comcast Foundation awarded $110,000 in grants to six nonprofits in Virginia. The organizations in the Richmond area included the Big Brothers Big Sisters of Greater Richmond & Tri-Cities and the Boys & Girls Club of Metro Richmond.

The Greater Richmond Partnership announced on Jan. 5 that it has raised more than $1 million in private sector funding. Most of that funding came from cash donations, but a great deal of in-kind fundraising was also provided.

The State Fair of Virginia received a first place award of distinction from the International Association of Fairs and Expositions in communications for its 2014 marketing campaign. 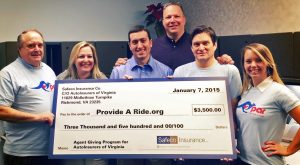 Provide A Ride, a nonprofit that gives free rides to prevent drunk driving, was awarded $3,500.

The Virginia Museum of Fine Arts opened the newly reinstalled Mellon Galleries on Jan. 16, which feature new works from the life and estate of longtime VMFA donor and trustee Paul Mellon.

Locally-based Provide A Ride was selected as one of 30 nonprofits nationwide to receive a $3,500 gift from Safeco Insurance. The funds will allow the nonprofit to continue its efforts to prevent drunk driving.

Container First Services, a residential waste and recycling services provider, recently redesigned the logos on its fleet of 60 trucks with “I AM Petersburg” logos. The campaign launched in early December.

The University of Richmond plans to install solar panels in the roof of its Weinstein Center for Recreation and Wellness, a project started with Secure Futures, a solar energy developer based in Staunton, Va. 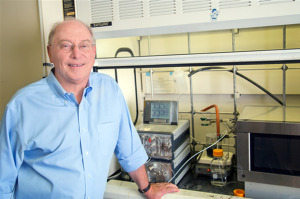 Professor B. Frank Gupton led a team that developed a means of manufacturing an AIDS drug.

Virginia Commonwealth University was selected as one out of 240 colleges and universities nationwide to receive the Carnegie Foundation for Advancement of Teaching’s 2015 Community Engagement Classification.

A VCU engineering professor-led team of researchers recently invented a new, cost-effective way to manufacture a widely used AIDS drug. The breakthrough could potentially expand the drug’s accessibility in countries with emerging economies like South Africa.

Chippenham Hospital earned a Level II trauma center designation by the State Health Commissioner from the Commonwealth of Virginia Department of Health, making it the only such center in Central Virginia.

VCU Associate Professor of Family Medicine and Population Health Alex Krist was appointed to the U.S. Preventive Services Task Force. The independent group comprises national experts supported by the Agency for Healthcare Research and Quality and the Department of Health and Human Services.

An opioid overdose was recently successfully reversed by police officers in Illinois using an EVZIO naloxone auto-injector developed by Richmond-based pharmaceutical company Kaleo. The company launched a Kaleo Cares donation program in which it gave the auto-injectors to local law enforcement agencies throughout the United States.