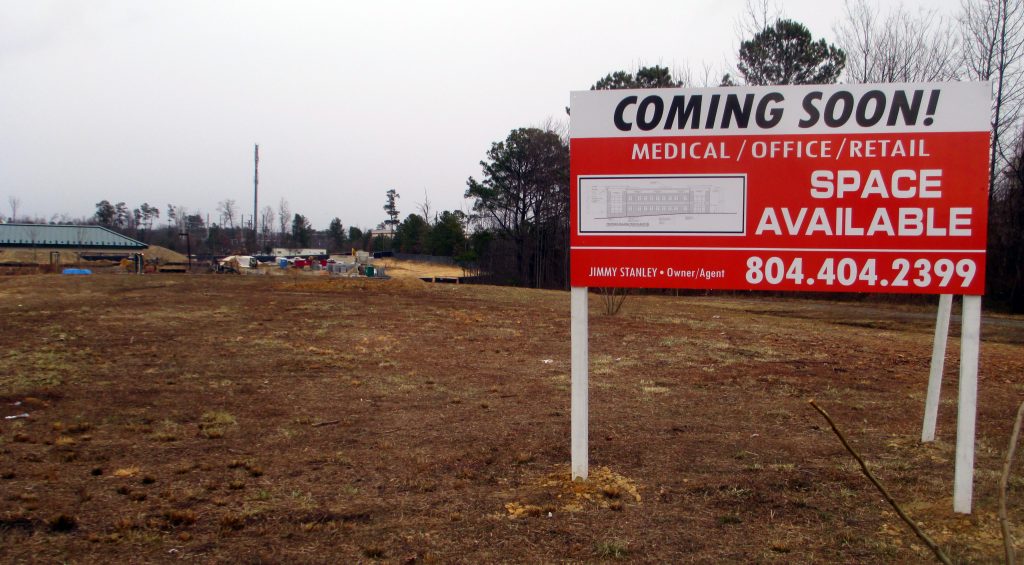 A new medical office building is going up near Short Pump. Photos by Katie Demeria.

A local pharmacist and surgeon are donning development hats, buying into the construction of their future offices.

Currin and Zemmel purchased the land for the building along with local development firm Stanley Shield. The project is the second phase of a three-building plan at Towne Center West led by Stanley Shield.

Work has already started on the first and largest phase, a five-story 110,000-square-foot building. VCU Health System will take up the entire building once it opens in late 2015.

Currin will take about 4,200 square feet on the second floor of the second building with his practice, Rx3 Compounding Pharmacy.

Currin founded Rx3 with his father in 1995. It currently occupies about 4,000 square feet in Chester. Currin was looking to expand in Short Pump when Jimmy Stanley of Stanley Shield reached out to him.

“The sheer visibility that we will have with the traffic going by there every day will be great,” Currin said. “It’s a billboard, basically, because we’ll have signs facing the road.”

The group purchased the 1.7 acres late last year for $1.8 million, according to Henrico County records. Currin said the entire building, including acquisition and development, should cost between $5 and $6 million.

As for other tenants, Currin said the owners are shooting for an all-medical building to complement VCU’s five-story building that sits next door between West Broad Street and Towne Center West Boulevard.

“We are in talks with several practices,” Currin said. “There has been a lot of retail in Short Pump, and there’s a big need for this. There are no medical practices in the area.”

This will be the smallest of the three medical office buildings planned at the site. The third plot can accommodate about 75,000 additional square feet, bringing the total size of the development to more than 200,000 square feet.

Stanley could not be reached for comment on the second phase. He previously said the entire three-phase project could cost around $48 million.

Will the short pump location hire any pharmacy technicians?