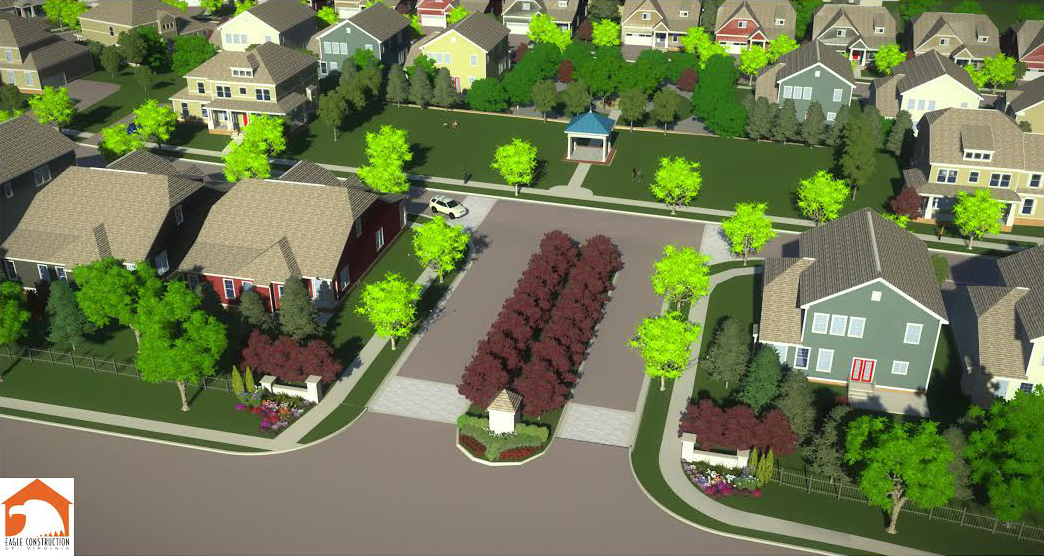 John Rolfe Square would consist of up to 40 single-family houses. Images courtesy of Markel | Eagle.

An urban village concept at a years-in-the-making Henrico County crossroads is continuing to take shape.

As development moves forward on the Shire, a mixed-use development at the convergence of John Rolfe Parkway and Church and Pump roads, plans are progressing for a $20 million project on the opposite side of the parkway.

John Rolfe Square would cover nearly 11 acres on the east side of the intersection and consist of up to 40 single-family detached homes. Markel | Eagle Partners, which is also developing the nearby Shire Place townhomes, is behind the project. 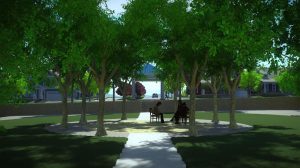 Plans call for a large community space within the John Rolfe Square development.

The project was originally proposed as pairs of attached townhomes, but the latest plan for detached homes received endorsement this month from the Henrico County Planning Commission.

Van Epp said the homes would add to the overall vision for the intersection, which was redesigned over the past several years to accommodate the parkway and encourage an urban mixed-use village concept there. Van Epp said the county has long had the area in mind for strategic development.

“This area, this intersection, has been a long time in the making,” Van Epp said. “It got put on pause a little bit with the real estate downturn, but long-term, we think that intersection is going to see a lot of real positive changes and great amenities for the entire area.”

Van Epp said the John Rolfe Square homes would range between 2,500 and 4,000 square feet, depending on whether a unit includes a basement. Units would have three to four bedrooms, with options for a fifth, and at least 2½ bathrooms. Van Epp said floor plans also would feature first-floor master bedrooms.

Price points for John Rolfe Square would start in the $400,000s, with customization options bringing prices into the $500,000s. Van Epp said the total real estate investment for the project is expected to be $20 million.

Should county supervisors approve a requested conditional rezoning next month, Van Epp said construction on infrastructure improvements could start this fall, with home sales starting as early as next spring. Eagle Construction of Virginia, a sister company of sorts to Markel | Eagle, is slated to build the homes.

Markel | Eagle’s other residential projects in western Henrico have included the brownstone units in West Broad Village, the upcoming Sadler Crossing project near Innsbrook, and the nearby Shire Place, which is under construction.

Shire Place is adjacent to the larger Shire development – proposed by a different development company – which fills the southwest corner of the intersection between John Rolfe Parkway and Church Road.

The Rebkee Co. is behind the Shire, which calls for 12 acres of townhome development and just more than 8 acres of retail space. Ryan Homes has the contract for building in the Shire.