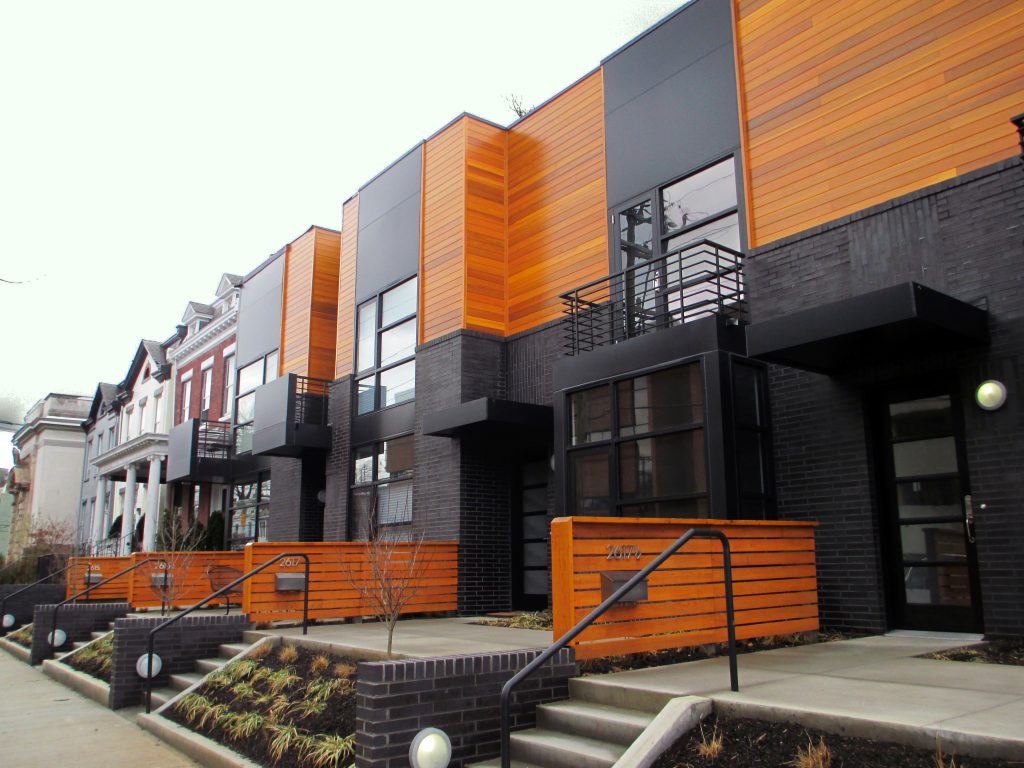 The homes in the Fan’s Citizen 6 development are all accounted for. Photo by Jonathan Spiers.

The newest – and newest-looking – homes in the Fan are now fully occupied.

The last unit of Citizen 6, a row of modern-design single-family homes in the 2600 block of Floyd Avenue, sold on Monday, marking the end of a two-year project that brought something new to the century-old residential district.

The wood- and window-sided exterior of the homes stands in contrast to the older rowhouses that line Floyd, while also fitting in with the block-shaped parking deck for Retreat Doctors’ Hospital across the street.

Such elements played into the design of the homes, said developer Bill Chapman, who worked with Baskervill architect and principal Burt Pinnock.

Chapman purchased the two parcels that previously housed a 1950s office building in 2013. He declined to discuss what he paid for the half-acre or the overall cost of the project. Prior to his purchase, the two parcels were assessed at a combined $656,000, according to city records.

After a 10-month process to rezone the property to allow for a parking area, demolition on the site started last April, and construction began two months later. CKO Construction was the builder on the project.

The two-story homes feature varying floor plans, most with three bedrooms and 3½ bathrooms. Square footages range from 2,200 to 2,900, and some units have ground-floor master suites, Chapman said.

Chapman described the interiors as a “modern minimalist” design, with open floor plans and a “clean, streamlined” look. 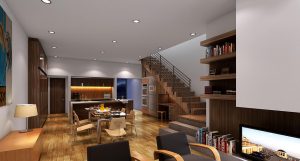 A rendering of a Citizen 6 home. Courtesy of Citizen 6.

The units, which were presold before construction started, were priced between $560,000 and $710,000. One South Realty Group listed the homes.

“One of the challenges in doing new construction in a neighborhood that has no new construction is trying to find accurate comps to back up your values,” Chapman said. “Part of our success in that challenge was being able to presell units and showing that the market supported our pricing.”

Chapman said the project also had the support of the Fan District Association, which he said he sought approval from even though it wasn’t required.

“It was important to us to take that road,” he said.

And Chapman said he took a similar approach with design.

“When we looked at design, it wasn’t just a matter of, ‘Oh, we have an idea for a product; let’s just plop it down in this location.’ It was much more thoughtful than that,” he said. “We walked the blocks of Floyd Avenue, both east and west of our location. We looked at scale, we looked at density, we looked at relationship of materials.”

As for the name, Citizen 6, Chapman said it represented not only the number of units but also “a good neighbor, a steward of the neighborhood.”

Citizen 6 is the latest project in Chapman’s portfolio, which includes The Decatur condos in Manchester and the Lofts at West Station in Roanoke. Chapman said his company, Bill Chapman Enterprises, has developed $30 million worth of projects in Richmond and Roanoke since 2008.

Chapman said he is looking at sites for his next projects, but he said a repeat of Citizen 6 is unlikely; its success is in its location in the Fan, where land for new construction is a rarity.

“I’d love to say we could go out and just do this over and over,” he said. “But what made this project special is that there is just not land in the Fan, in a location like this, that would allow you to repeat this over and over. It’s fairly unique.”

But Citizen 6 has inspired another new home construction project in the Fan. Developer John Nolde III, who cites the success of Citizen 6 as a source of encouragement, plans to build Huntt’s Row, consisting of eight rowhouses and a duplex, at 2601 Kensington Ave.

That project is likewise represented by One South Realty, whose founder, Rick Jarvis, noted the effect Citizen 6 has had.

“Absolutely one indicated to the other that there is a huge demand for new housing in the Fan District,” Jarvis said. “Everything here is about 100 years old, so there really is a pent-up demand. You want the amenities that the Fan offers, but not necessarily the problems that a hundred-year-old house inherently comes with, even if it’s been renovated as well as possible.”

Jarvis said such demand would keep him looking at the Fan and the city’s other developed neighborhoods.

“We’re always on the lookout; Huntt’s Row is a great example of that,” he said. “There are definitely some other sites that might work for something like this, but you also have to make sure you can acquire the site reasonably. And the Fan District, as such a mature and fully functioning area of the city – there’s not a lot of spots where you can do something like Citizen 6.”

Thanks to Bill Chapman for giving Livewire the opportunity to work on the Citizen 6 project! Congrats on the article!

Congratulations to both Bill Chapman and the team from OneSouth Realty for this addition to the Fan. The new townhouses in Randolph, the new Nolde townhouses and the proposed new condos in Carver show that there is a need for new for sale product in the City. We all look for new such product in Manchester soon as well.

Nice looking buildings, perhaps in Short Pump. But the Fan is an architectural treasure, and this is a textbook example of the “Disneyfication” of a historic neighborhood by developers. Infill doesn’t have to mimic existing structures, but there should be compatibility and there is none here despite the quality of worksmanship.

How did the Fan District Association let this happen?

These condos are lovely, but just out of place in the Fan.

@Ron Virgin and Brian Glass: First, it appears that this was approved because it replaced something else which was not particularly historic. I haven’t seen pictures of the office building that was there before, but I imagine it was even more out of place. Furthermore, these buildings are not “Disneyfying” the fan. I think that idea/term would apply if they built low quality (or at least, low-craftsmanship) row homes in a psuedo-historical style, similar to what you would find at Short Pump. Proper modernist architecture is not cheap, due to the precision and craft applied to the materials. I believe… Read more »