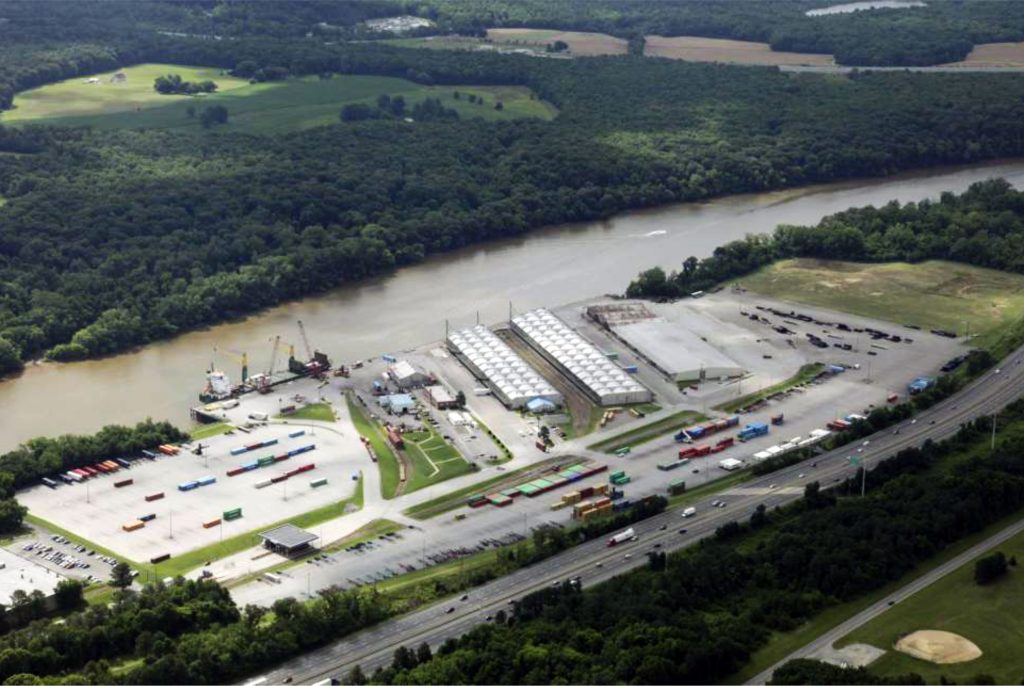 The Port of Richmond is expected to see more shipments from a new client. Photo courtesy of city of Richmond.

Congestion in eastern Virginia is pushing at least one company upriver and has resulted in a big new customer for the Port of Richmond.

Singapore-based R1 International, a natural rubber supplier, is planning to start hauling its product past its previous Norfolk base and into the Port of Richmond by the end of May.

Frans de Jong, president of R1 International’s U.S. operations, said the company is in the process of signing a lease for a 76,000-square-foot warehouse at the port. Jon Beckner, a broker with Joyner Commercial, is working the deal.

R1, which ships giant slabs of rubber in 20-ton containers, could cut its storage costs in half with the move to Richmond. De Jong said the move will also allow it to escape the congestion that he says is overwhelming the Norfolk International Terminals port. Large vessels in Norfolk lead to longer wait times for unloading, he said.

“They create these surges of activity, which create congestion. It’s been going on for a long time,” de Jong said. “It’s something I don’t see going away because it’s all due to this population density.”

When the lease agreement is finalized, R1’s natural rubber will start riding the James River Barge Service, which runs from Norfolk to Richmond three days a week.

Joe Harris, a spokesman for the Port of Virginia, said that may increase to four days a week, thanks to increased popularity in the Port of Richmond.

The Port of Virginia has leased the city-owned, 121-acre Port of Richmond for the past four years. Before that, the city managed the property. That lease is up in July 2016, and Harris said the company is in the process of working with the city to extend it.

“We have a lot of hope for that facility, that it can be an economic engine for the city of Richmond,” Harris said.

Port of Virginia also operates the Norfolk facility, as well as ports in Newport News, Front Royal and Portsmouth.

But Harris said activity has significantly increased since then. Between 2014 and 2013, the average number of containers moved in the Port of Richmond jumped by 33 percent.

“There is a continued and growing interest in the Port of Richmond as an option for companies to move their cargo to the worldwide market,” Harris said.

If it is able to extend its lease, the Port of Virginia plans to make some upgrades to the Richmond location, including adding a new mobile harbor crane and updating some of the 300,000 square feet of warehouse space.

The Port of Richmond brings in about 15,000 containers each year, Harris said, and has five primary users. Total barge service, which includes transportation to both Richmond and Baltimore, increased by about 18 percent between 2013 and 2014.

For companies like R1, avoiding travel down the busy Interstate 64 and saving money on truck operations are benefits of choosing the river path, de Jong said. Richmond is also a more convenient destination for customers picking up recently unloaded cargo, he added.

“We think Richmond is a growing area,” de Jong said.

Founded in 2001, R1 International has eight locations across seven countries, largely throughout eastern Asia. The company delivers more than 1 million tons of rubber across the globe annually. Its U.S. office is in Charlottesville.

http://www.treehugger.com/endangered-species/increasing-demand-rubber-catastrophic-endangered-species.html “A new study from the University of East Anglia (UEA) predicts that between 10.5 and 21 million acres of plantations will be required to meet the projected need for rubber required by the tire industry by 2024. Many areas of Asian forest – from Java and Bali to Vietnam, Southwest China and the Philippines – will be threatened; such broad expansion will have “catastrophic” biodiversity impacts, with globally threatened unique species and ecosystems all put in harm’s way. Species such as the endangered white-shouldered ibis, yellow-cheeked crested gibbon and clouded leopard (pictured above) could lose precious habitat. Lead researcher… Read more »