A group of developers is planning a five-story apartment project in Shockoe Bottom.

Four local developers are teaming up to erect yet another apartment building in Shockoe Bottom.

The project brings together Roper and Emerson, who are constant collaborators on projects in the area, with Bice and de Venoge, who work together at real estate firm Secam Properties. The foursome is working on the new project as Valley West LLC. 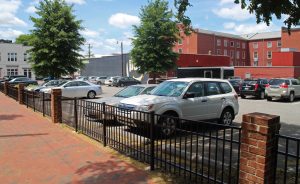 The developers’ land is currently a surface parking lot. Photo by Katie Demeria.

“We’ve known Phil and George a long time and have crossed paths through a variety of real estate contacts, particularly in the Shockoe Bottom area,” Bice said. “We were able to pool our resources and put our properties together and come up with this valuable apartment complex.”

Bice and de Venoge own part of the parking lot, and Roper and Emerson own the remainder. A smaller plot of about 0.25 acres at North 19th and Grace streets, owned by Sterling Bilder Developers, is not included in the plans.

Roper and Emerson’s Shockoe Center Apartments also sits on a corner of the block. Roper said the developers plan to put a pool on the roof of the Shockoe Center garage that will be available to the tenants in both apartment buildings. The new building will feature a rooftop lounge looking toward the downtown skyline.

“I think this project will encompass the best amenity package in the marketplace,” Roper said. “The pool will be hard to beat, and the skyline lounge on top of that – that will do it.”

Four of the building’s five stories will be above ground. That will include apartments on the upper three floors, a layer of ground-level parking and additional parking below ground.

The apartment units will have one-, two- and three-bedroom floorplans, ranging from 650 to 1,200 square feet. 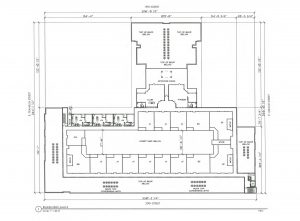 The project, which has yet to be formally named, is still in the early stages of the development process, Roper and Bice said. They already received approval from the city’s commission of architectural review for the development and said they will work with the city to secure building permits. They hope to break ground by the end of the year.

The developers are financing the project through a loan from Wells Fargo.

Poole & Poole Architecture is designing the building, and a builder has not yet been selected. According to its architectural review application, the building has been designed to fit in with other Shockoe Bottom structures with a warehouse or factory aesthetic.

“I think we’re all excited about the potential of Shockoe Bottom for Richmond, and all the indications show that Richmond’s a dynamic and growing city,” Bice said. “We’re just pleased to be able to be part of putting in place some of the infrastructure the city’s going to need for the future.”

It never ceases to amaze me that the least qualified and least sensitive people continue to define the urban fabric of our beautiful city. These insensitive large scale multifamily projects need to be held to a higher standard if our city is to truly move forward.

Chris, you’ll have to qualify yourself as a judge as to how Emerson and Roper are “the least qualified and least sensitive” to do this project. That was a cheap shot. They’ve been very successful and have built some beautiful projects together. This building will fill a need and an empty lot that grows nothing but weeds.

Why not give it a federalist design to better complement the neighborhoods character.

We need a parking deck to address the needs of restaurant patrons and visitors, not more large scale projects. Many apartment dwellers and their guests park on the streets, not underneath the buildings they live in, due to extra monthly fees tenants are charged. Adding to the street congestion are the Park and Ride folks, so where are business patrons and visitors to park? Most rental units have two people per unit, which means two cars per unit. Parking issues never seem to be factored in to the overall plan in developing such large scale projects.

I agree with Susan Mossem. Why is parking not taken into consideration in the planning stages? I didn’t move to a specific Shockoe Bottom apartment building because there is no guaranteed parking for my guests or my adult children when they visit. IF they could have found street parking, they would have had to feed meters every two hours.

Ann & Susan, the article specifically notes ground level and underground parking. It would not surprise me at all to see this parking be a shared use area, with free parking for residents and paid parking for the public.

An unapproachable facade befitting a bunker. The Berlin Wall with windows.

Well, at least it has a pool on top.

Bruce, Chris is a fine judge. His architectural and design skills are well documented. I and other architects place a lot of credibility in his skillful eye. It is no cheap shot. His words are spot on. While Emerson and Roper have done some nice things together, these plans and renderings offer no glimmer of hope. The scale and massing do little to suggest that weeds are not a more attractive option. I trust George shall encourage his team to provide our growing City with an urban solution that meet the test of time. I am confident they know they… Read more »

The impact of the building is everything when setting your building apart from the competition, yes a roof top pool; but when people first drive up they are going to see exactly what you are going for a factory or something that looks like a lot of the other buildings, but not on the row, you are in the neighborhood which was dotted in 1740 – 1809 with fine architecture before the great flood so much lost to time. So build on that something that stands out but complements the neighborhood. In the vernacular model of architecture they offer attention… Read more »

The pictures look like the area across the street from the King Street Metro stop in Alexandria. All it needs is a Joe Theismans Place and it would be identical twins.

A tad monolithic to be sure, but it’s also true that healthy cities have more buildings and fewer parking lots. This is a positive development on the whole.

As a resident of Shockoe Center, this will certainly be interesting to watch, (and hear, and feel). I doubt seriously that parking will be free, and what of the 100 of so cars displaced by the construction, for 2 1/2 YEARS?! We also have NO visitor parking at the properties here, so again, adding cars, subtracting parking equals less overall parking. I understand the design idea, but it could have a little more character, we already have a ton of ‘factory’ looking buildings. The worst part is that the property management either has NO idea this is happening, or is… Read more »

Thank you for bringing the realities of the parking situation to the forefront from the perspective of a resident, something the developers seem to ignore. I wish the city planners and zoning officials would require a parking deck for visitors, guests, and patrons of the restaurants and businesses in the area. How about incorporating some green space to enhance the quality of life for residents living in The Bottom? Free parking for residents would certainly help to alleviate some of the congestion, but there’s still not parking spaces per unit. Has the Shockoe Bottom Association addressed any of these issues… Read more »

I realize that today almost everyone has a car, and that is a reality that we must live with. I however don’t feel that a development in the heart of the city where population density and urban development should be the main concern should put such a huge priority on parking. Idea’s like a parking space per living unit in Shockoe is awful to me. So there should be a wasteful surface parking lot for every building? And a neighborhood this central should never have zoning laws that require each unit built to have a parking spot. I do agree… Read more »

And to be PERFECTLY clear, the ‘rooftop’ pool is nonsense. Our parking structure is 1 story tall, and is butted against the current 4 story L shaped building, and is about to be penned in with another 4 story building on the other 2 sides. so, NO view from the prison yard pool. Unless of course they are going to rebuild the current 12 space parking, but there are NO indications of that on the blueprints of the new building…