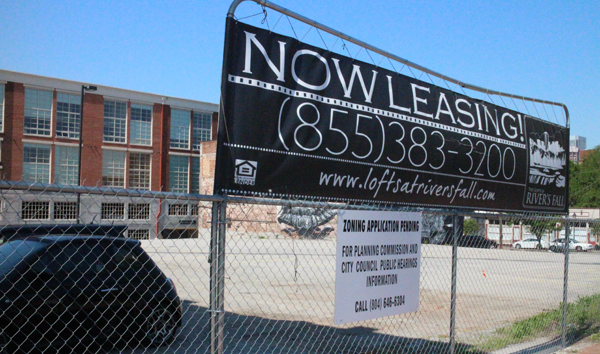 Canal Lofts V will sit on a 0.3-acre, L-shaped parcel that stretches between South 19th Street and Main Street. Photos by Katie Demeria.

Historic Housing, run by Louis Salomonsky and David White, is looking to start construction this summer on a $12.5 million project at 1817 E. Main St. It will include an 8-story, 76-unit building and a 2-story mixed-use building fronting Main Street.

Temporarily dubbed Canal Lofts V, the project was endorsed Monday by the Richmond Planning Commission and should go before Richmond City Council on May 11.

This is the fifth phase of Historic Housing’s redevelopment of the Philip Morris warehouse complex, which the company purchased in 2000. The complex has been transformed into 525 apartments thus far.

The fourth phase was the 124-unit Lofts at River’s Fall, and the first three phases consisted of the development of the Lofts at Canal Walk complex, which sits across from Canal Lofts V between 19th and 20th streets.

Canal Lofts V will sit on a 0.3-acre, L-shaped parcel that stretches between South 19th Street and Main Street. Construction should start this July, White said, and finish up within a year for a summer 2016 opening.

The 8-story building is set to include one- and two-bedroom units, with square footage varying between 670 and 1,110 square feet. The building will also include a rooftop community garden and a community room.

“The layouts vary quite a bit. One of the things we’ve found is that different people like different things, so we tried to provide some variety,” White said. “Everything is a little bigger, and the quality is higher. It’s the next generation of apartment properties.”

The 2-story building will sport just two apartment units, along with a 1,500-square-foot commercial space on the ground floor. Salomonsky said the developers do not yet have a commercial tenant in mind.

Historic Housing secured a loan for the project through M&T Bank. The company will be providing its own general contracting and architectural work.

While the apartments are being developed now as rental units, White said their size keeps in mind the potential to someday convert them into condominiums.

“One thing Richmond lacks right now is housing ownership,” White said. “We’re getting lots of downtown housing, but what we’re getting are renters. Renters are good, but the renter is making a one-year commitment to a location. An owner is making at least a 30-year commitment. We think for the long-term health of the city, we need to encourage more homeownership.”

Salomonsky said the developers will wait about five years before testing the market to see whether condominium conversion is feasible.

White and Salomonsky’s other current projects include the conversion of a massive warehouse near The Diamond into 205 units, and a two-building, 132-apartment project called 1 Scott’s Addition at Summit Avenue and Norfolk Street.