A developer is pitching nearly 50 town houses on a rare undeveloped plot in Short Pump. Renderings courtesy of Andy Condlin.

Having yet to cash in on the commercial growth around it, one of the last undeveloped parcels in the shopping mecca of Short Pump is now being pitched for a residential project.

A developer is looking to rezone 4 acres of primarily wooded land at the northern terminus of Tom Leonard Drive, behind the Kohl’s and Best Buy, for 48 townhomes. The project, if approved by the county, would create the only residences on the north side of West Broad Street between its interchange with Interstate 64 and Short Pump Town Center.

Andy Condlin, an attorney with Roth Doner Jackson who is representing landowner and developer GAW LLC, said the parcel is the only piece of undeveloped land in that area, which is dominated by shopping centers, big-box retail stores and the mixed-use West Broad Village.

He said the property  at 4110 Springfield Church Lane consists of four parcels that were combined in 2003 and rezoned and marketed as a commercial site. He said it has seen little interest since, despite being marketed through various commercial brokerages. 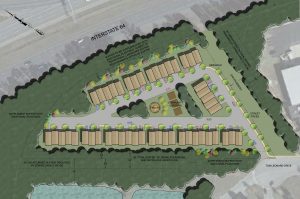 The developer is using wide tree buffers in a push for privacy.

“This property’s been on the market for a dozen years without even a single offer during that time period,” Condlin said. “It’s been very difficult for this owner to hold the property and not have any offers.

Henrico County planning staff is recommending the planning commission deny the rezoning request at its meeting on Thursday.

The staff has maintained that the parcel, which is currently zoned for business use, is too small for the density of townhomes proposed and that the rezoning would conflict with the county’s comprehensive land use plan, which calls for commercial use in the area.

A staff report states the request “is not consistent with the surrounding land uses or the land use recommendations of the 2026 Comprehensive Plan. With the lack of nearby residential zoning this development would be isolated by the surrounding commercial uses.”

Condlin and his client GAW, consisting of three unnamed partners, disagree with the staff’s assessment.

“This is a good use that, quite frankly, works well with the business uses, provides additional support for the businesses, but also – when you look at the property next door, which has struggled – commercial is just not something that’s viable on this property, for a lot of factors,” he said.

A challenge for the property, which was previously the site of the now demolished Springfield Baptist Church, is the presence of a graveyard that would need to be relocated prior to development. GAW LLC has indicated it would do so, according to the county report. 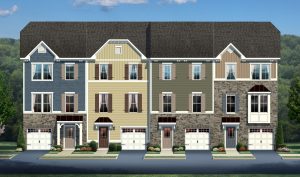 Plans call for a maximum of six townhomes in a row.

Another challenge is the parcel’s shape and location, despite being in the heart of Short Pump, Condlin said.

“It’s at the very end of a commercial cul-de-sac,” he said. “It’s kind of off the beaten path, and it’s kind of an oddly shaped parcel.”

The site is alongside I-64 just west of Tom Leonard’s Farmers Market. The property that Condlin said has struggled over the years is immediately adjacent. It has seen various tenants come and go and is currently the site of a Goodwill retail location.

The townhomes proposed would have a minimum of 1,800 square feet of space, with a maximum of six attached units per building. Each unit would include three bedrooms and 2½ bathrooms. They would be priced starting in the high $200,000s, with an average price in the $320,000 range.

Condlin said the project pulls from other townhome developments in the county, West Broad Village among them.

“We’ve tried to take what we consider the best elements of the various town house developments within Henrico County and made it part of this case,” Condlin said.

The proposal includes 27 proffers, or guarantees from the developer, including a one-car garage for each unit and landscape buffers that Condlin called “substantial.”

The buffers would take advantage of existing vegetation, including tree lines of 50 to 200 feet in width along the interstate side and 50 feet or more along the community’s other borders. Condlin said those buffers make the site more secluded, despite its location.

Condlin said he filed the plans with the county last fall and the project attracted immediate interest from builders – a response he considers an endorsement from the market.

“I think the market says there’s a need for this type of development,” he said. “There’s certainly a lot of interest. And that still exists.

“There’s a lot of demand from builders to come into this area, and there’s so little available land.”

While the project would be unique for that area, it would add to other residential construction planned near Short Pump and nearby Innsbrook. Markel | Eagle Partners received approval in March for 60 townhomes near Innsbrook, and to the north, HHHunt Communities is proposing as many as 260 homes near Wyndham Forest. That proposal is also on the commission’s agenda Thursday.