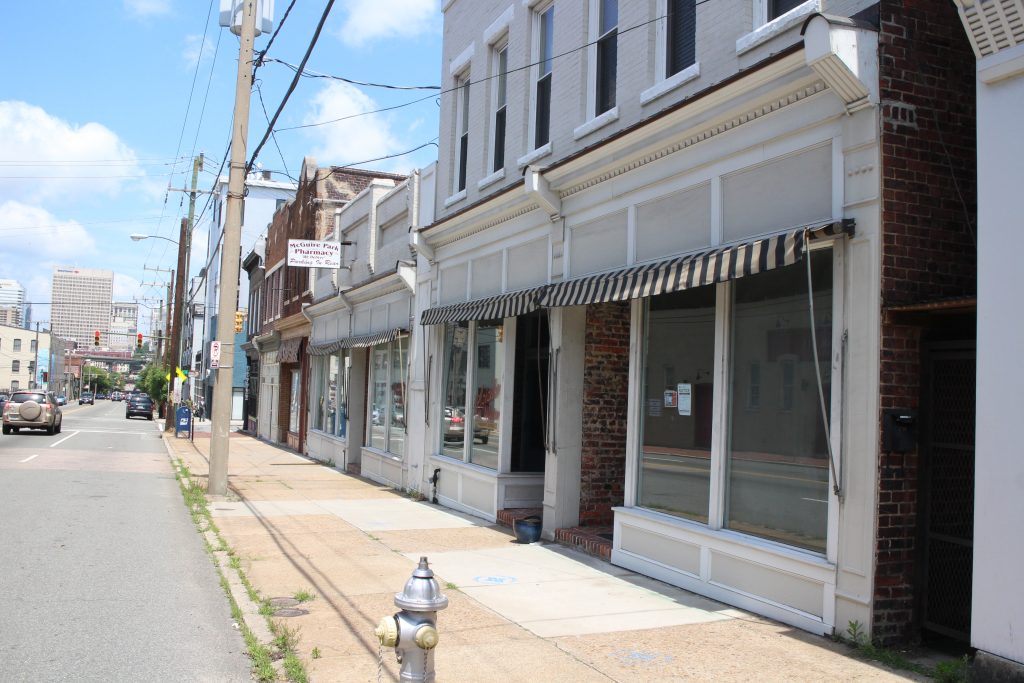 A pizza concept is setting up shop in the former Aziza’s on Main space. Photos by Michael Thompson.

What began with backyard pizza parties has now grown into a full-scale restaurant in Shockoe Bottom.

Pizza Tonight plans to open its first stationary restaurant this fall at 2110 E. Main St. Owner Victoria DeRoche said she has a five-year lease on the 2,300-square-foot space that was formerly home to Aziza’s on Main.

The restaurant will serve the Neapolitan-style wood-fired pizzas that Pizza Tonight has sold since 2011 at food courts and farmers markets from its mobile wood-fired oven.

Five years since she launched Pizza Tonight, DeRoche didn’t expect to have the title of restaurant owner. 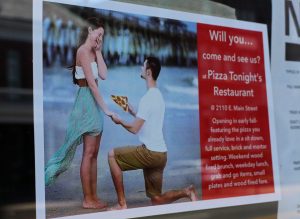 Pizza Tonight plans to open in the fall.

“I thought we were going to be at farmers markets – that was my ambition,” she said. “We had been hosting a monthly pizza club for two years before that.”

DeRoche said before launching Pizza Tonight, she started welcoming friends and members of the food industry to eat pizza made at her Museum District home, where she has a 24-inch wood-fired oven in the backyard.

She said her guests would ask about the pizza dough, which gave her the idea to start selling it. Adding a mobile wood-fired oven was a way of replicating those pizza-filled evenings for others. It also turned out to be her path toward building a business.

“I like to entertain,” DeRoche said. “It kind of started from there.”

She launched Pizza Tonight in 2010, selling pizza-making kits along with antipasti at local farmers markets. In 2011, she bought a mobile oven from a Colorado company to begin working the local food court and events scene. Today, Pizza Tonight products can be found online and on grocery store shelves, namely that of Relay Foods and Ellwood Thompson’s.

Catering events, including weddings, has become a driver of the business. 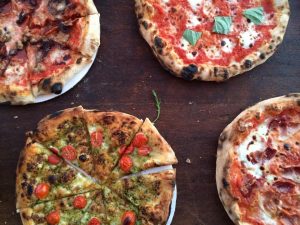 “We’ve moved to over 95 percent catering,” DeRoche said. “This (restaurant) is just a home for what we do and gives us the ability to expand.”

Backed by investors, DeRoche bought the assets at Aziza’s, which closed this year after an eight-year run. DeRoche wouldn’t say how much was spent on the deal, which was first reported by Richmond.com. She said it was appealing in part because of some of the equipment already in place.

“Them having the wood-fired oven was a huge draw,” DeRoche said.

DeRoche said she is working with designer John Meara to renovate the space. Plans call for adding another wood-fired oven, as well as expanding the dining area. The restaurant will also sell small plates, beer, wine and cocktails.

DeRoche said she likes the idea of opening where other businesses have established themselves or are moving in. Pizza Tonight will open next to burger spot Honey Whyte’s. Nearby newcomers include the speakeasy Grandstaff & Stein across the street and Whisk, a bakery, just a few doors down.

“An upper-scale pizzeria coming into the space offering wood-fired pizza, tapas-style fare and the pizza we’re already known for will be exciting,” DeRoche said. “It’s exciting to be part of continuing the Richmond dining scene.”