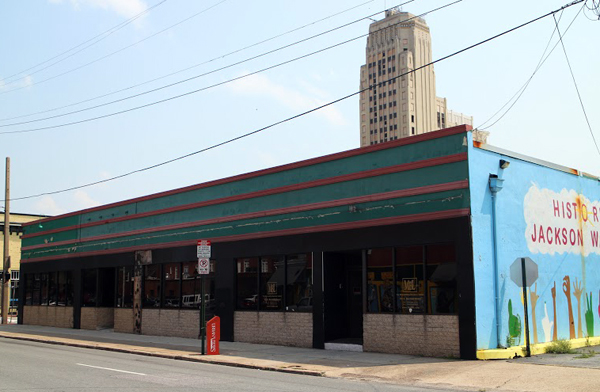 Douglas Development’s Central National Bank building rehab project can be seen in the distance from its latest purchase. Photos by Michael Thompson.

With its largest Richmond project towering nearby, a Washington, D.C., development firm has expanded its reach into Jackson Ward.

Douglas Development, the company behind the Central National Bank building rehab and owner of more than 20 downtown properties, added to its holdings last month with the purchase of a vacant building on a corner of North Second and East Marshall streets.

Norman Jemal, a principal with Douglas Development, did not respond to requests for comment on this latest purchase. A message sent to a company spokesperson was likewise not returned. 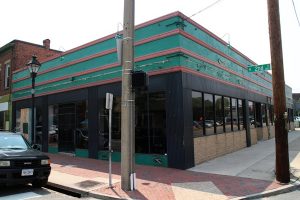 This side of the building once housed a restaurant.

The property was sold by the Metropolitan Business League, a nonprofit that works on business development for women- and minority-owned companies.

President Oliver Singleton said the organization had the building on the market for three years and received two offers during that time, ultimately selling it for less than half of its $572,000 assessed value.

“I am disturbed that we didn’t get the full value for the building,” Singleton said. “I had no choice (but to sell). It was a burden, between the taxes and the insurance.”

The business league had used the building as an office before moving three years ago to 3022 W. Broad St. The portion of the property that fronts East Marshall Street is outfitted for a restaurant and has been home to various ventures over the years.

Douglas Development now owns at least 12 properties along a two-block stretch of Jackson Ward, giving it a grip on a cluster of storefronts around the Central National Bank building.

The company is in the midst of converting the 23-story, 240,000-square-foot tower into more than 200 apartments. The company has estimated the project would cost about $20 million. It purchased the tower in 2005.

In addition to its work on the bank building, the company is currently working on a nearly 250,000-square-foot mixed-use development in a former concert venue in Washington.

I think everyone is looking forward to seeing Richmond’s most iconic building back in commission again. Jemal appears to be out of the weeds financially and back to what he’s done best in DC. It would be great to see him spend some money on his other acquisitions in Richmond. My parents took me to see the Ice Capades at the ULine Arena back in the early ’60’s. I wish it had been the Beatles show instead!

Bruce Milam, God bless you for remembering the Ice Capades. I skated in those shows at the Uline Arena in the 1960s. Maybe you saw me in the show; maybe I saw you in the audience. I’m sorry you missed the Beatles. I wanted to see them, too. We all wanted to create beautiful memories.

There is a lot happening on that block with The Cultured Swine and JKogi opening recently, and now JKogi expanding. I would love a restaurant/bar or some sort of market there! Also can’t wait for Central National Bank to finish.