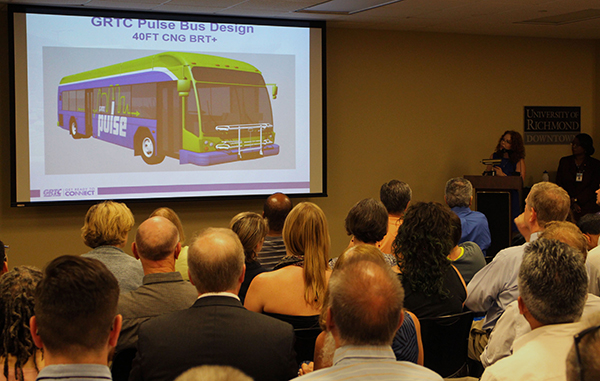 The conversation about a new rapid bus line planned to run along Broad Street is picking up speed.

The Greater Richmond Transit Co. on Monday held its seventh scheduled presentation on its plans to build a rapid bus line from Willow Lawn to Rockett’s Landing along Broad Street, while businesses and neighborhood groups have become more organized in voicing their concerns over the project.

The line, branded as GRTC Pulse, calls for construction of a new 7.6-mile, 14-stop rapid bus line that runs mostly along Broad Street.

The $53.8 million system is intended to function faster and more efficiently than the current buses serving Broad Street. Trips between downtown and Willow Lawn are expected to go from 35 minutes by local bus to 21 minutes using the new line.

Plans call for dedicated bus lanes that run both alongside and down the middle of Broad Street. Construction is scheduled to begin August 2016 and the line is planned to be operational in October 2017.

To speak up about the plan, seven Richmond business and neighborhood organizations recently formed the RVA Coalition for Smart Transit.

The group has been critical of the anticipated loss of parking and the potential effects of construction on businesses along Broad Street. The group has also argued that GRTC has not reached out enough to the public.

“Our big concern is that we all feel like the plans for bus rapid transit were basically constructed in a bit of a vacuum without meaningful engagement from all the communities the plan would affect,” said Matthew Stanley, a spokesman for the coalition.

GRTC spokeswoman Carrie Rose Pace said changes have already been made to the plan in response to concerns raised by the public. For example, GRTC initially said 708 parking spaces along Broad would be eliminated by construction of the line. It has since scaled that number back to 306, based on community feedback, Rose Pace said.

GRTC has held public meetings and published studies on the new line since 2010, Rose Pace said. And she said Richmond’s City Council had to hold a public meeting before voting to allocate funding for the project.

“There have certainly been ample opportunities to participate,” she said.

GRTC has received written letters of support for the plan from VCU, the Greater Richmond Chamber, Venture Richmond, and the Shockoe Bottom Neighborhood Association. Last week, Bike Walk RVA, a Sports Backers program, publicly commended GRTC for making improvements to the plan based on public input.

Each new station would take a few months to build.

“They improved the plan,” the Bike Walk RVA release said. “We’ve had the opportunity to work closely with GRTC and the City to ensure that we have safe crossings all along Broad Street.”

And Stanley, of the coalition, said his group has taken notice of GRTC’s recent changes to the plan.

“That does show an effort,” Stanley said. “We feel like they have finally done some due diligence in looking at what can work.”

Stanley said the coalition’s goal is to mitigate any harm that might come to businesses as a result of the design, construction, and operations of the bus system. Construction for each of the 14 stops along the line is expected to take between three and four months.

“It’s not practical to say, ‘Let’s go back to square one,’” Stanley said. “We’re trying to look at parts of the design that are malleable to make modifications.”

Some of the group’s other concerns include keeping loading zones, placement of left-hand turns and accessibility to public transit for low-income communities. Of the 90 current designated loading zones along Broad Street, 55 would be eliminated as part of the new line.

Sticky ToGoGo restaurant owner Kevin Wilson, speaking on behalf of the Fan Area Business Alliance, said he and other business owners are considering withholding their meals tax money if their concerns aren’t addressed.

Research and construction for the line is being funded in part with $24.9 million from a federal grant. The rest of the money is being divvied up in the following way: Virginia Department of Rail and Public Transportation is paying $16.9 million, the city of Richmond is putting up $7.6 million, and Henrico County is paying $400,000.

GRTC is a nonprofit that’s jointly owned by the city of Richmond and Chesterfield County.

The information presented Monday by GRTC will be presented again at 6 p.m. tonight at University of Richmond Downtown at 626 E. Broad St.

In your closing statement that the :
“GRTC is a nonprofit that’s jointly owned by the city of Richmond and Chesterfield County.”

Has anyone asked why Chesterfield County is showing no support in this venture or why they do not attend the GRTC/BRT Public Meetings? More less show plans of utilizing and building on to the current plan and applications made for grant monies?

This is the stupidest plan and waste of money ever! Loss of 708 parking spaces and $53.8 million to save 14 minutes???? Are you kidding!

At least quote the right information when negatively comment on something. They revised the parking spots to 306 spots, which is well less than half the 708 parking spots. Also Richmond City is not putting up $53.8 million on its own.
The loss of parking coupled with a newer, faster (yes only 14 minutes) and generally more appealing (visually and functionally) public transit system will hopefully promote less car ownership in the city. Which is a good thing. We live in the city not the suburbs.