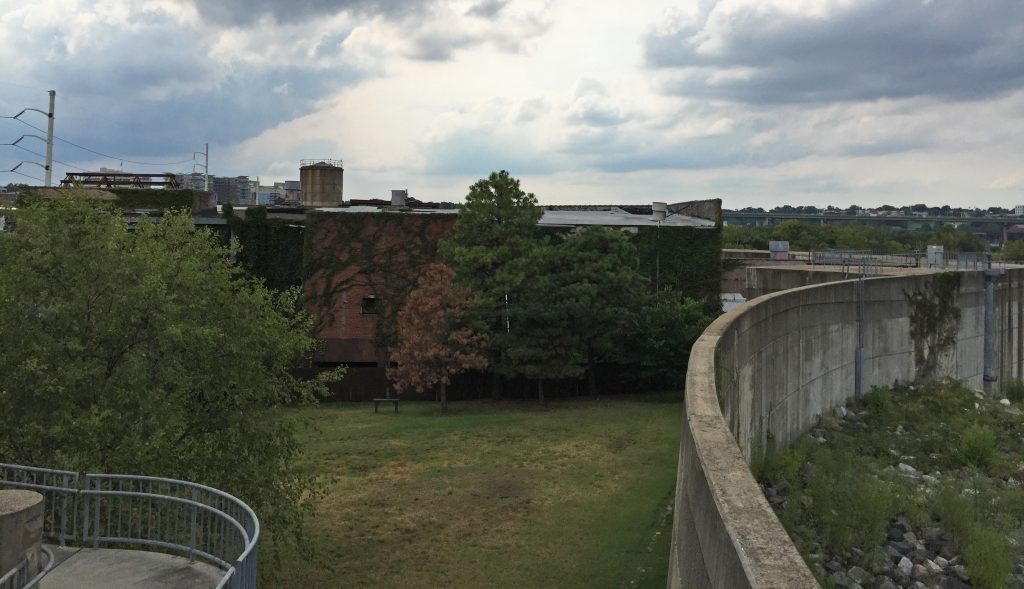 A developer wants to replace the old Paper Board building along the river with a new apartment tower. Photos by Katie Demeria.

A local development company has big plans to alter the riverfront skyline.

Fountainhead Properties, run by Tom Papa and Rick Gregory, is renewing an idea to build two towers on a quasi-island along the riverfront in Manchester just west of the Mayo Bridge.

The company is preparing to submit plans for what Papa said would likely be a pair of 16-story towers housing apartments and commercial space that would sit on the elevation overlooking downtown Richmond from above the flood wall.

“It will have the best views of any building in Richmond,” he said. “This will be a beautiful project.”

The project would be located on land situated between the James River flood wall and the Manchester canal, technically making it an island. The canal is now still water, though it had once spun the water wheels of paper companies located in the vicinity, according to a historical placard near the site. 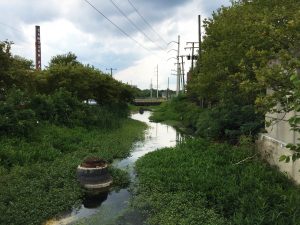 The Manchester canal once powered mills along the river.

Fountainhead owns a plot of about 2 acres, which includes the vacant Richmond Paper Board Co. building at 111 Hull St. Fountainhead purchased the property from the paper company in 2012 for $850,000. The developer now owns the land through South Canal LLC.

The city’s public works department owns the land on either side of the parcel along the riverfront.

Fountainhead attempted to seek approval for the plan in the past as a historic rehab project but could not agree with the city on those plans, Papa said.

In the plan’s current incarnation, the building on the property, built in 1929, would likely be demolished to make room for one tower, while the other tower would sit on a vacant area upstream. It could also include parking garages. The company is preparing to work with the city on the idea once again, Papa said.

“There’s a lot of symbolism in us basically being able to put something substantive along the riverfront,” he said. “It’s one of the things you see in most class-A cities – big buildings on the water.”

Papa said he envisions this new project having a similar impact on the skyline as the new 10-story Terraces at Manchester, developed by Robin Miller and Mark Purcell and currently the tallest residential building in the Southside neighborhood.

Fountainhead has plenty of experience with large projects on both sides of the river. In the spring, the company completed the Miller Lofts, the 197-unit, $30 million rehab of the former Miller Manufacturing plant on Decatur Street.

“Manchester is exciting because it’s not too late, it’s all happening now,” Papa said. “It’s wide open here, that’s why we like Manchester.” 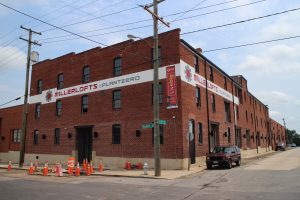 The Miller Lofts are currently 80 percent leased, said Tara Carter of Luxe Residential, who is handling leasing. It is an income-restricted project that offers units to residents who earn $31,200 or less.

Fountainhead has also continued work on the other side of the James. In June the developer completed Gate 5 at 311 S. 11th St., the latest addition to its massive Locks development in Shockoe Slip.

Gate 5 has 52 units, bringing the total number of units in the Locks to 226, Carter said. The building is already entirely leased out, reaching that level faster than the company expected.

“It’s really indicative of the desirability of that particular area, in that we’re seeing a lot of viability and interest in Shockoe Slip,” Carter said.

The property offers a varied package of amenities to its residents, Carter said, including kayak and bike rentals, concierge services and a guest suite for out-of-town visitors.

KBS was the general contractor, and Walter Parks was the architect on both Miller Lofts and Gate 5.

Fountainhead’s website indicates that the Locks has so far cost $34.2 million to develop.

Papa said the company still has more to do at the Locks. It is in the conceptual stage of two large, additional structures, he said, but did not add any more details because the plans are still subject to change. Work on the first of those buildings may start as early as next year.

The developer has also stepped into Charlottesville and is working with Piedmont Housing to build residences for individuals with disabilities. That’s after recently completing a new facility for the Program for the All-Inclusive Care of the Elderly.

I hope this project can bring architecturally appeasing buildings to our skyline. I’m pleased to see that there will also be commercial space here, I think mixed use buildings are great! Awaiting a render to see how excited I will actually be, I often find projects similar to this in other cities to be very suburban in design but we will see!

“It will have the best views of any building in Richmond,”

That’s right, because it will completely block the buildings that currently have the best views in Richmond, right beside it!

“That’s right, because it will completely block the buildings that currently have the best views in Richmond, right beside it!”

Not necessarily, it all depends on the structure of the building, what’s included and how it’s built.

No these buildings are in the southern part of the neighborhood so they will not block the city view but more so the tobacco row views of the city from Manchester.

Let me correct that they are in the norther part of the neighborhood blocking the eastern view .