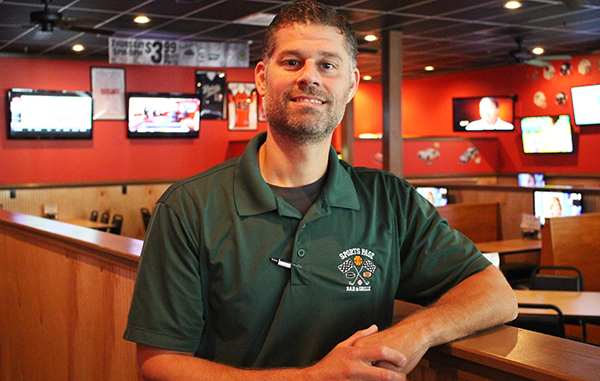 A growing local sports bar chain is going on the offensive in Ashland.

Sports Page Bar & Grille plans to open by September at 504 England St. near Randolph-Macon College. It’ll be the fourth location for the family-owned, sports-centric restaurant brand focused on burgers and wings.

Sports Page is owned by husband and wife Rob and Karee Jones and Ron Newcome, Karee’s father. They opened the first locations more than a decade ago in Midlothian and Mechanicsville and expanded last year into the West End.

Rob Jones said the 3,000-square-foot Ashland location was formerly home to a steak and seafood restaurant. The landlord of the property was a patron of the Mechanicsville Sports Page and reached out to see if the company would be interested in the space.

“We’ve always looked out there,” he said. “It’s a small-town atmosphere.”

Jones said it would cost about $50,000 to open in Ashland. He said the venture was attractive because, for the first time in Sports Page’s history, the company would be taking over an existing restaurant space rather than starting in a storefront from scratch.

He said the challenge of adding a new location is finding the right people to manage it. He attributed his company’s health to the quality of each location’s service.

“You can go anywhere to get beer and wings,” Jones said. “But if the customers come back, it’s because they like the service.”

I’m sure the administration of Randolph-Macon is “thrilled” to have a sports bar open-up so close to campus.

There’s actually one already there….it opened about a year ago…England Street Tavern and it’s right across the street from the new location for Sportspage…..should be fun for the whole town of Ashland!

And there is trackside grill on center ave

Even more reason for the college to be concerned. Wal-Mart and Bass ProShops were bad enough!

@Mike Thomas – What a tragedy it is for people to bring commerce and entrepreneurial ventures to the town of Ashland!

A bar and two big box stores that have been a blight on small town America are hardly “entrepreneurial.”