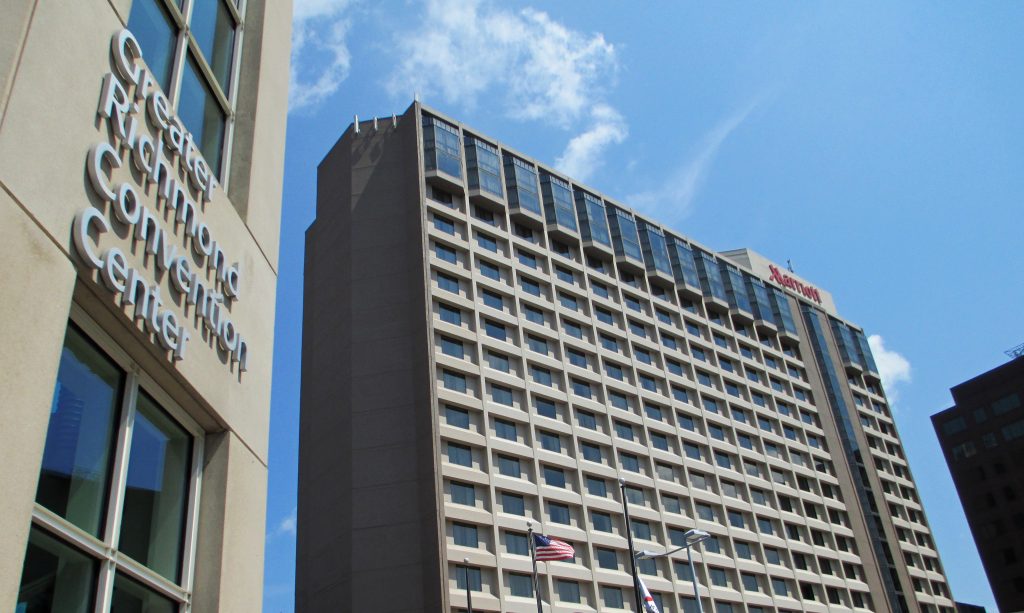 The Richmond Marriott Downtown – in the heart of the race events – is completely booked the last weekend of the month. Photos by Jonathan Spiers.

While the full impact on suburban hotels remains to be seen, hotels in downtown Richmond are filling up fast for at least part of the 2015 UCI Road World Championships.

Hotels of different sizes in the heart of the city are already largely booked – at higher-tier rates – the last few nights of the nine-day cycling event, which hits Richmond Sept. 19-27. That demand coincides with the days that the event’s more popular races will take place.

The Omni Richmond Hotel, with 361 rooms and suites on South 12th Street, is already booked for most of the nine-day event. As of Tuesday, its website said it had no availability for single night stays on the nights of Sept. 22-26.

“It is a busy time,” said Rick Butts, the Omni’s director of sales and marketing. “I think downtown has seen a nice surge in business around the race. We do expect the busiest weekend to be that last weekend of the race. We expect to be at sellout or close to it.”

The Omni does have a multi-night package specifically for the race still available, as do other hotels in the region. But those packages require a certain number of nights, whereas single-night searches show no availability.

The hotel’s rates are also up for those days, as appears to be the case with other hotels in the region. The Richmond Region Tourism office lists 44 hotels with known availability during the race. That’s out of 149 total hotels in the region listed by the office, which combined have more than 18,000 rooms in Chesterfield, Hanover, Henrico and New Kent counties and the city of Richmond. 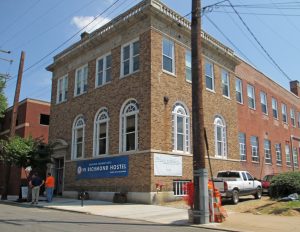 A new hostel recently opened and offers much cheaper accommodations, including in dorm-style rooms.

The Richmond Marriott Downtown, beside the Greater Richmond Convention Center on East Broad Street, is one hotel in the heart of the event’s ground zero, where the races will start and finish and event activities will be held.

The Marriott’s sales and marketing director Rand Goodman acknowledged the hotel is filling up quickly over the event’s four peak days but said rooms remain available the first half of the event.

“We’re really excited because we’re right at the start-finish line,” Goodman said. “We’ve been preparing for this for well over a year and getting our associates excited for the world coming to Richmond, and we’re (in) the middle of it.”

The hotel is also adding a fleet of complimentary bicycles for guests, both during the event and from then on, Managing Director Joseph Longo said.

Farther east along Grace Street, the 70-room Linden Row Inn is booked Sept. 25 and 26, while the nearby HI Richmond hostel, which just opened last month and is on the race course routes, has some private rooms booked Sept. 24-27 but has other private rooms and dorms available, at prices ranging from $30-$35 to $79-$99. 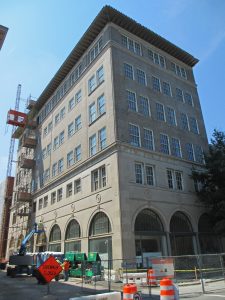 Quirk Hotel’s construction is racing to finish just before the start of the cycling event.

Meanwhile, the nearby Quirk Hotel is wrapping up construction to open in time for the races. The hotel had planned to open Sept. 1, but that date has been pushed back to Sept. 17, two days before the official event start.

Quirk Hotel’s sales and marketing director Kate Brown said its location along Broad Street, which is part of the race routes, has proven a challenge but would also prove an amenity.

“One of the biggest challenges we faced was working with arrivals and departures with all of the road closures (during the race) in Richmond,” she said. “In the spirit of this fun sporting event, Quirk Hotel came up with some creative valet alternatives for drop-offs and pick-ups throughout the week.”

While rooms remain available in the surrounding suburban counties, those are likewise expected to fill up for those last few days in the two weeks that remain leading up to the event, said Mark Yardis, vice president of operations for Shamin Hotels, the largest hotel operator in the greater Richmond area.

“There are fans coming on the first weekend, clearly, but the primary events are creating a wonderful travel pattern for the hoteliers – certainly from the 24th to the 28th,” he said.

Shamin has 25 properties, including the Holiday Inn Express Downtown and six hotels near Richmond International Airport.

Yardis said the suburban hotels will likely see a ripple effect referred to in the industry as “compression.”

“The hotels that are clustered around the start and finish line, which are the larger hotels downtown around Broad Street, they are certainly clearly benefiting from the occupancy of the teams and the fans and the logistical support folks,” he said. “When you have that concentric circle of occupancy and basically an Olympic Village, if you will, downtown, you then have compression out into all of the outlying areas.”

Likening the effect to dropping a pebble into water, Yardis said: “It’s like a wave: You can start to see the circle of impact going out further and further.”

Shamin Hotels owns a total 3,363 rooms across its hotels. In anticipation of the race, it blocked off more than 10,000 room nights for event-related guests, Yardis said. Its Hampton Inn in Mechanicsville, with 80 total rooms, has already booked 68 percent of its rooms across Sept. 24-28.

The impact of the bike race on area hotels may not be fully known until after the event, in part because it’s difficult to pin bookings directly to the race during what is otherwise normally a busy travel month.

Speaking for the Omni, Butts said its price increases during the race are not driven by the race alone, but also by other factors that affect supply and demand.

“There is certainly some compression around the race because there is some additional demand, but it’s normally a busy time anyway,” Butts said. “So our rate structures are not anything out of the ordinary, per se.”

Yardis said that last weekend of September in particular is a peak time for hotels every year.

“September, it starts to cool off some, tourism gets going good again, it’s a great wedding month,” he said. “That’s probably a 90 percent (occupancy) weekend for the downtown hotels on (that last) Friday and Saturday, without an event.”

Referring to Shamin’s hotels, Yardis said: “It looks to me like the advance sales for September in some are up double digits, so that’s more than 15 percent for the month. How much of that is related to the races versus September being the No. 1 leisure (month)? I think it’s a combination of things.”

Clarification: A previous version of this story incorrectly listed the total number of hotels in the Richmond area. The region has 149 hotels with a combined 18,000 rooms. Forty-four of those hotels have indicated room availability during the race, according to the Richmond Region Tourism office.