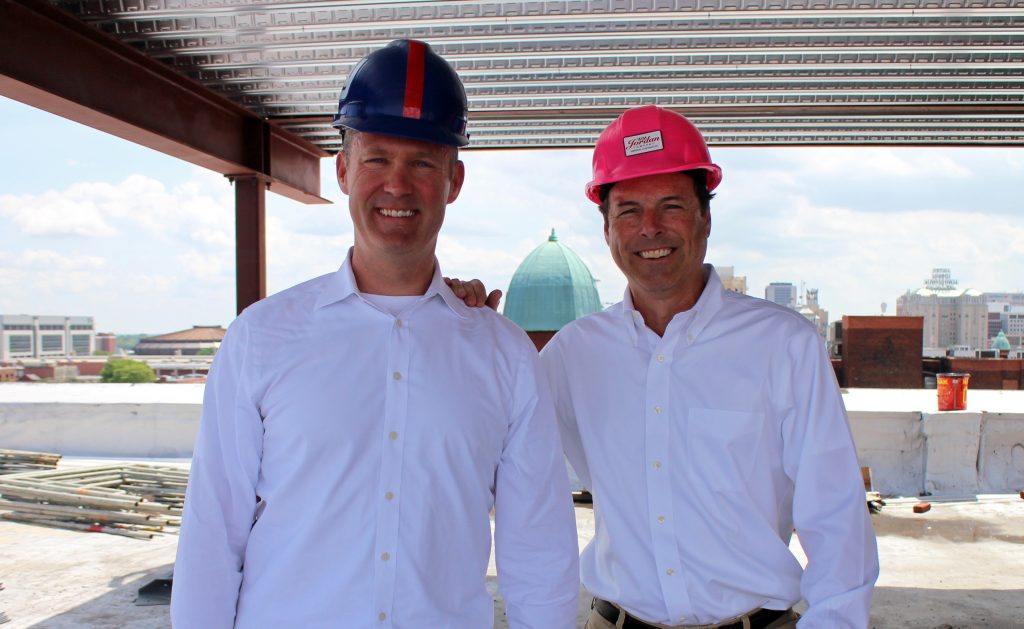 Christian Kiniry (left) and Ted Ukrop during a hard-hat tour of the upcoming Quirk Hotel. Photos by Katie Demeria.

Construction on a new West Broad Street hotel is racing to the finish line.

Quirk Hotel, a venture led by Ted and Katie Ukrop, is expected to open around Sept. 1, adding 75 hotel rooms to the city shortly before it hosts the UCI Road World Championships bike race later that month.

The Ukrops on Tuesday led a tour of the 60,000-square-foot space split between two buildings at 201 and 207 W. Broad St. The renovations began last summer. 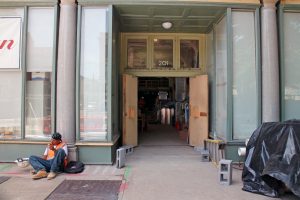 The hotel will house between 70 and 76 rooms.

“I love Richmond, I believe in it; I think we have so much potential as a tourist destination,” Ted Ukrop said. “I thought we could use a hip, unique hotel.”

The developer on the hotel is Bank Street Advisors. The firm’s Christian Kiniry is working with the Ukrops on the project.

“The Ukrops have always been engaged on Broad Street, and that’s what we want to continue doing,” Kiniry said.

Quirk Hotel will feature a new restaurant and bar headed by David Dunlap, the former executive chef at the Ashby Inn in Paris, Virginia. The concept has yet to be named. The hotel will also have a cafe in the lobby and a rooftop bar.

Ukrop said the Quirk Hotel has been an idea five years in the making. He described it as art-centric and said it can largely be viewed as an art gallery within a hotel. It will feature work from Richmond artists and aims to connect them with guests and locals residents. 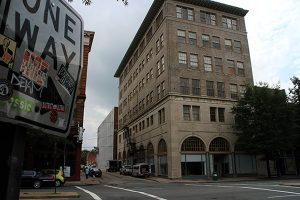 The new hotel will have a restaurant and rooftop bar. Photo by Evelyn Rupert.

“This is an art hotel; we want to showcase their art,” he said.

The property at 207 W. Broad St. will house Katie Ukrop’s Quirk Gallery, which will leave its current space at 311 W. Broad St. Kiniry said it is unclear what will become of Quirk’s current space, whether the Ukrops will open a new venture there or if another tenant will settle in.

Kiniry declined to share how much the construction will cost, but said TowneBank is the lender. The developers are seeking historic tax credits on the seven-story building at 201 W. Broad St., which was the former J.B. Mosby & Co. department store; it was built in 1916.

The three-story 207 W. Broad St. building is not being treated as a historic renovation.

The two buildings are connected and will allow easy movement between the Quirk Gallery and the hotel lobby. Some rooms will spill over onto the upper floors of the shorter building.

3north Architects is designing the building, Poesis is doing the interior design and WM Jordan is the general contractor. Denver-based Destination Hotels was selected as the manager for the Quirk Hotel.

The hotel will open for reservations in June. Room rates have not yet been set.