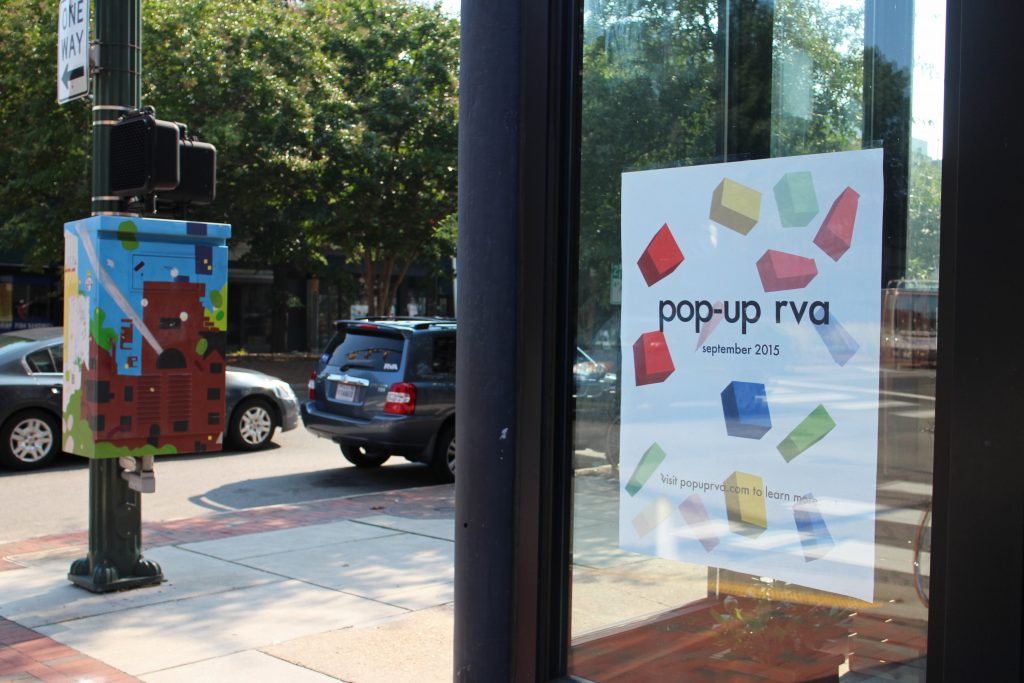 Retailers are popping up in mini stores along Broad Street. Photos by Michael Thompson.

The developer of a major downtown apartment project is using the upcoming bike race as retail testing ground.

Washington, D.C.-based Douglas Development is working to lease some of its long-vacant storefront properties around its Central National Bank redevelopment project during the UCI Road World Championships as a way to gauge long-term demand for retail in the area.

The company is working with the nonprofit Storefront for Community Design to accept applications from tenants and facilitate the leases for a total 5,000 square feet of retail space between five storefronts near the intersection of East Broad and North Second streets.

Cindy King, a Douglas Development asset manager in Richmond, said leasing the empty storefronts during the race from Sept. 19-27 is both a way of drumming up interest in the available Douglas-owned properties and testing consumers’ appetite for more retail downtown.

“We partnered with Storefront for Community Design so we can try to show some activity in these locations,” King said. “If you see action in there, it draws more attention.”

Their effort is branded as Pop-Up RVA, and the city of Richmond and the Downtown Neighborhood Association are also helping in the process. 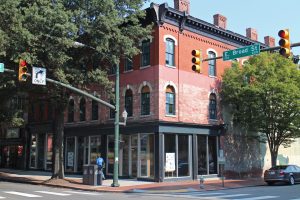 Pop-Up RVA shops will set up in a string of buildings at Broad and Second.

Tyler King of Storefront said the organization has leased the spaces and is sublicensing them to the vendors. The Downtown Neighborhood Association is paying for the insurance to use the space, King said. He said Storefront will keep 40 percent of the rent money, and 60 percent will go to Douglas.

Bringing some new life, at least temporarily, to the unused storefronts could also be a preview of more permanent things to come for the neighborhood Douglas Development has methodically invested in over the years.

The company owns more than 20 downtown properties, and its efforts are anchored by its most visible Richmond project, the Central National Bank building. It is restoring the 23-story, 240,000-square-foot tower into more than 200 apartments, for which it is set to begin pre-leasing by the end of the year.

“The Central National Bank building is a landmark that’s going to bring a lot of these things together,” Cindy King said. “It’s Richmond’s time to make things happen, and we’re trying to get it started and keep it moving.”

Douglas isn’t the only company hoping the bike race can translate into retail dollars.

Michael Sparks of Michael Sparks Design Firm and Underground Kitchen is organizing Pop Up Revolution to gather retailers during the race at Plant Zero in Manchester and at two storefronts on the 300 block of East Broad Street.

Sparks said more than 30 businesses have signed on to sell their wares between the two sites. T-Mobile is one of the retailers coming into the downtown storefronts at 313 and 315 E. Broad St.

Other vendors involved in Pop Up Revolution include Richmond companies like grocer Ellwood Thompson’s, Alton Lane, Carytown Teas and LaDiff, as well as out-of-town companies like Napa Home & Garden.

“A lot of our retailers are testing the market for Richmond to see if retail could be supported downtown,” Sparks said. “No one (retailer) wants to be the only one.”

Sparks’s Pop-Up Rev. at Plant Zero will include many of the creative new shops who are transforming the local retail scene. PUR will be perhaps the best one-stop opportunity yet to experience what these new shops, many with fine locally made goods, have to offer.

And on Sept 20th, two Sundays from today, participating shops in Pop-Up Revolution will be donating 3% of all purchases to The Virginia Home, the unique residential facility for disabled Virginians at Byrd Park.

So come out, get started on your Christmas list, and help The Home, too!

As well, Plant Zero will feature some of the great chefs from the region every day during the bike races with specialty dinners and daily treats. It’ll offer an interesting respite from the crowded streets and bars closer to the UCI finish line.

Michael Sparks is the biggest visionary to land in Richmond since Christopher Newport sailed up the James River.