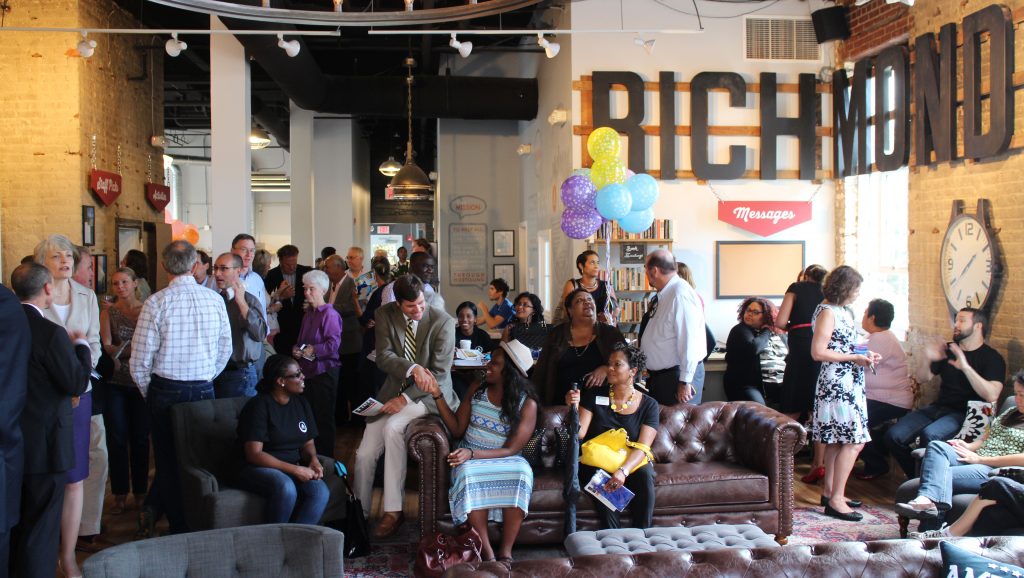 The hostel hosted a ribbon ceremony on Thursday. Photos by Jonathan Spiers.

Just in time for the big bike race, Richmond’s first hostel ceremoniously opened its doors to the world with a ribbon-cutting Thursday.

Local officials and some big names in the local business scene joined Hostelling International in celebrating the opening of HI Richmond, a 58-bed hostel in the former Otis Elevator building at 7 N. Second St.

The event marked the end of a $2.6 million project, two-thirds of which was covered by HI. The remainder was raised through contributions from local donors, including Jim Ukrop, who helped get the ball rolling with a $25,000 donation last year.

Russ Hedge, CEO of HI USA, also acknowledged contributions from Ted and Katie Ukrop, Matthew Goodwin, and John Russell, a Bethesda, Maryland, man for whom the hostel’s common room is named. Other support came from the MeadWestvaco Foundation, the Marietta McNeill Morgan and Samuel Tate Morgan Jr. Trust, and the Mary Morton Parsons Foundation, among others. 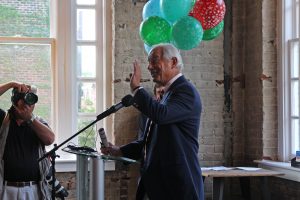 Jim Ukrop said the hostel, which offers dorm-style rooms for as low as $30 a night, will attract young travelers from around the world who will want to come back and stay in Richmond hotels.

The opening comes just one week before the city hosts the UCI Road World Championships, an international cycling event expected to draw spectators from across the globe.

Richmond Mayor Dwight Jones said the hostel is opening at a time when the city is getting a “world posture.”

“We need places like this where people can share together, where diversity can be appreciated,” Jones said.

Work started on the project one year ago. The architect was Bruce Shirley of Ratio PC, and J.W. Enochs Inc. did the construction.

Hedge said it was unusual for HI to cover two-thirds of the project cost, but he said it was willing to do so because the organization believed a hostel could work in Richmond.

“Now we turn this hostel over to you,” Hedge said. “It’s largely up to you to make the hostel what you make it. The bottom line is this hostel is an opportunity, and we’re happy to be part of the Richmond community.”