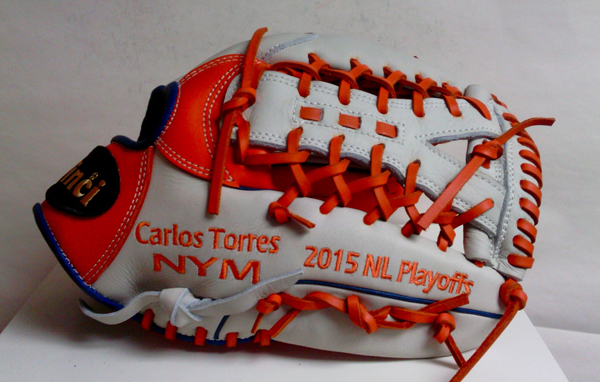 Vinci Pro made a custom glove for Carlos Torres to celebrate the Mets’ trip to the 2015 playoffs. (Courtesy of Vinci Pro)

A strained calf muscle is all that stands between a local baseball glove company and a chance to see its product on the sport’s biggest stage.

And in case you haven’t heard, the Mets on Tuesday are headed to their first World Series in 15 years. But Torres – and Vinci Pro’s gloves, by extension – likely won’t make the trip.

A calf injury suffered during a Labor Day game against the Washington Nationals has kept Torres out for much of the last seven weeks, including the Mets’ run through the playoffs. And the ailment will likely keep him off the Mets’ World Series roster.

While Vinci, the son, who is the company’s CEO, said some World Series spotlight on its brand couldn’t have hurt, views in a big game don’t carry a company as far as one might think.

“For exposure, it definitely helps, but we haven’t seen such a huge increase in sales when something like that happens,” Vinci said. “It’s the day-to-day that means everything.” 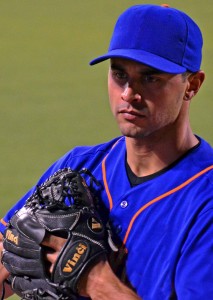 Torres armed with a Vinci mitt.

Not one to dwell on the issue, Vinci said Vinci Pro still has plenty to celebrate. Torres and his Vinci glove got plenty of screen time with dozens of appearances in games this season as the Mets surged toward their best season in years. He was also involved in an improbable fielding play in August that made highlight reels nationwide.

And Joakim Soria, a pitcher on the Pittsburgh Pirates who uses Vinci gloves, gave the company a postseason appearance when he came in relief against the Cubs in the one-game playoff on Oct. 7 and struck out all three batters he faced in an inning.

“I got a text from Carlos (Torres) that (Soria) was in the game,” Vinci said. “He struck out the side in the one game.”

The company is also having its best year ever in terms of sales, Vinci said. It has sold more than 5,000 gloves, with its youth series and custom gloves selling particularly well.

Its products range from $49.95 to $320, and this year Vinci launched its new Fortus series, a line of $99 gloves that are easier to break in.

Its gloves are sold in 50 smaller stores across the country, and more than 100 independent sales reps peddle its products nationwide. Its gloves are also now sold on the websites of sports goods retail giants Dick’s Sporting Goods and Sports Authority, and the company is in talks with Kohl’s for online sales, Vinci said.

It’s all positive traction for a company that has kept a low profile in Richmond since its founding in the late ‘90s.

Vinci Pro was started by the elder Peter Vinci, who had dreams of playing in the majors before enlisting to fight in Vietnam, his son said. He eventually began designing his own baseball gloves, with the idea that if the Vinci name couldn’t be seen on the back of a jersey in the pros, maybe it could get there another way.

“My dad always wanted to get our name in the major leagues,” Vinci said.

About 20 players who have made it into the major leagues have used Vinci gloves over the years. Today, with the elder Vinci still designing the company’s gloves, there are more than 100 players in the minor leagues using Vinci gloves, in addition to Torres and Soria in the majors. 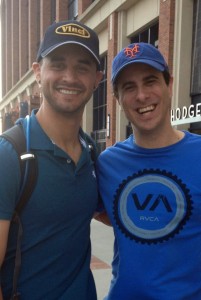 The slow but steady growth is based in part on the fact that unlike some brands, Vinci Pro does not pay its players to use its products.

“They wear it because they like it,” the younger Vinci said. “They see the quality of the product and they want it. Then they meet us as people and they see we’re a little different than other companies.”

Could the company get more exposure if it paid celebrity athletes to use the gloves? Maybe, Vinci said, but that’s not likely in the cards.

“We of course do this for money, but that’s not what it’s all about,” Vinci said. “The relationship is everything to us. If you want to do it right, keep the quality of the product up and maintain proper relationships with people. I think that’s very important.”

In a token of the relationship they’ve built with Torres, the Vincis sent the pitcher a custom glove celebrating the Mets’ playoff appearance.

Such gestures celebrating the Mets’ success could have been seen as sacrilegious in the Vinci clan not long ago. The family hails from Port Chester, New York, and the younger Vinci said he was raised a Yankees fan.

Congratulations to Pete, Peter and Joanne Vinci. The rise of Vinci Pro is a testament to your dedication and perseverance.