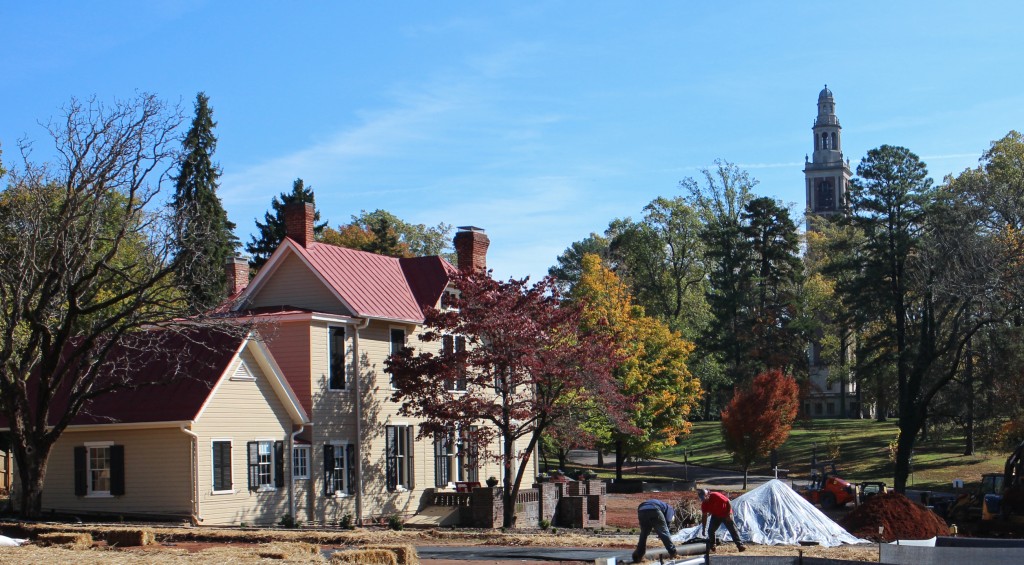 With the Carillon bell tower visible in the distance, work on the foundation of a new home is underway in Byrd Park beside the restored Marburg House. Photos by Jonathan Spiers.

The oldest house in Byrd Park is about to get new neighbors.

Site work has started on Carillon Place, a cluster of four new homes on the subdivided lot of the 126-year-old Marburg House.

Slated for demolition two years ago, the 1889 house – which predates nearby Maymont by four years – was saved by William Lipps, who purchased it in February with local businessman Troy Sponseller from Castle Kanawha 1508 LLC, the development entity behind Carillon Place.

Developers Ben Partridge and J. Mark Slack had planned to raze the neglected house to make room for more new homes. But when Lipps, a doctor of pharmacy at the Veterans Affairs Medical Center, expressed interest in saving the structure, it was incorporated into the development’s design, said Partridge, an agent with One South Realty. 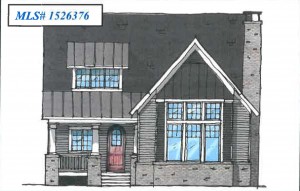 The first home to be built will be 3,380 square feet and sell for about $850,000. Renderings courtesy of Carillon Place.

“We had a whole different design, because the house was really run down and we didn’t think anyone would want to buy it,” Partridge said. “Then Dr. Lipps came out and wanted to buy it, and he worked with Historic Richmond on a plan to preserve it.”

What resulted is Carillon Place, which will consist of Marburg and four new homes ranging from 2,500 to 3,500 square feet. John Robertson and Lynn Ivey of HomeKeepers LLC are building three of the homes, featuring designs by architect Chris Edsall. The fourth home, designed by Dave Johannas of Johannas Design Group, is being built by Matt Ellington of Ellington Homes.

The three- and four-bedroom homes will range in price from about $850,000 to upwards of $1 million.

Partridge said the homes will blend in with the surrounding neighborhood and take advantage of the property’s views of the nearby Carillon bell tower. Located at the corner of Pump House Drive and Bute Lane, the 1-acre property was subdivided to create two lots fronting Bute and two others facing the Carillon. 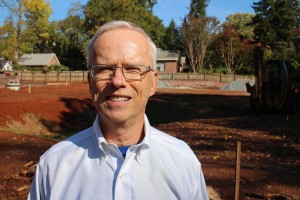 The developers purchased the property in 2013 for $725,000. Partridge said the cost to develop the property would exceed $1 million.

Site work started about a month ago, with construction crews laying out foundations for the homes. Kenneth Liesfeld of New Field Inc. is the contractor.

“People who are empty-nesters wanting to downsize, and some younger families wanting to be in the city and have a new house,” Partridge said. “This is kind of a hot area, and there’s not much new construction in the city. We saw this as an infill opportunity.”

Meanwhile, Lipps is enjoying his new home, which he moved into a year and a half ago with his Boston terrier, Ena. He and Sponseller closed on the house in February, purchasing it for $565,000.

As stipulated in his agreement with the developers, he recently completed improvements to Marburg’s exterior, working with Beaverdam-based Curtis Home Improvements.

Lipps said he has spent $80,000 on the exterior improvements, which included custom-made shutters and a repainted roof. He plans to spend the next several years restoring the interior, including updating the kitchen and bathrooms and converting a detached two-room servants quarters building into an office.

“I’m restoring it rather than renovating it,” he said. “I really like the old feel of it, so I don’t really want to do a lot of major, modern (updates). The house has some really nice 1930s-era wallpapers, and there’s been no work done to chop it up into little apartments, so it has the soaring ceilings and all the original fireplaces and paneling, which I definitely want to keep.”

Lipps said the process of saving the structure over the past two years has been trying, but he said he’s impressed with how the project is coming together.

“It’s been a little shocking seeing all the work done, but they’ve been very careful to avoid tearing down some of the historic elements, like a retaining wall that’s original,” he said. “The construction crew he’s got here is top notch, so I’m pleased.”

A great infill project- this is going to be a success just like Citizen 6 on Floyd Ave.

I don’t think filling in a beautiful historic neighborhood with cheap looking houses is a terrific idea. Perhaps these builders should consider building houses that fit into the neighborhood and that will be considered beautiful in 100 years. Citizen 6 is ugly now and will be ugly 100 years from now, if it still standing.

Kudos to Mr. Lipps for saving the marburg house from being razed.

I am a bit skeptical of this “infill”. Price point in this area does not justify these prices. The upgrades better be massive. Are there any floor plans for these homes available? On a positive note, the present house looks amazing. Kudos to Dr. Lipps and his team for the historically accurate restoration. Quite a transformation!