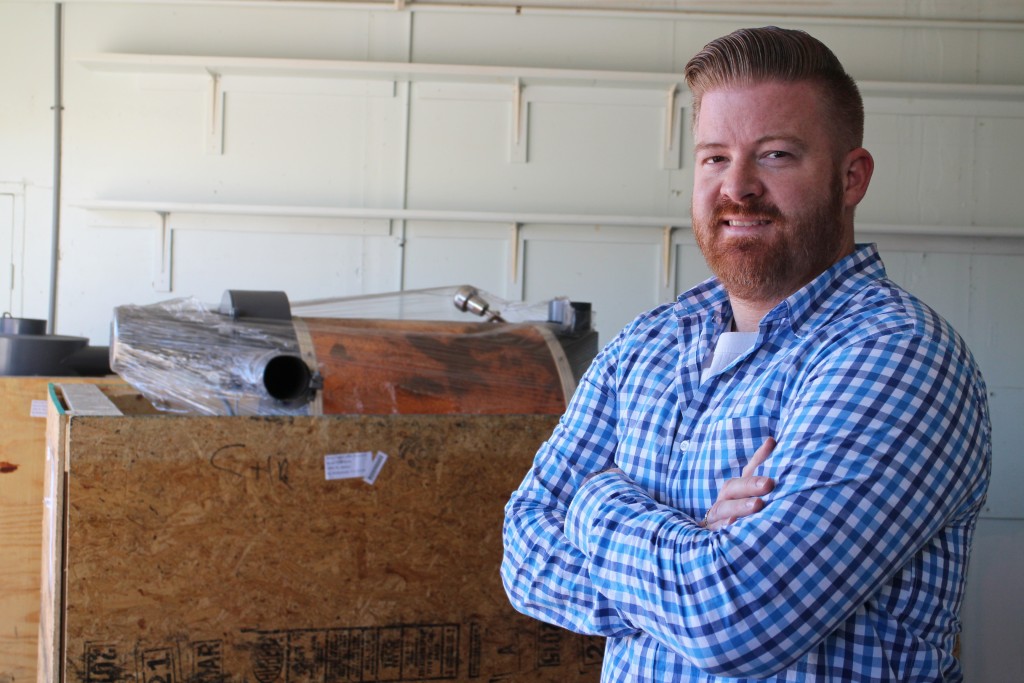 Ryan O’Rourke and his wife are setting up a new coffee operation in Scott’s Addition. Photos by Michael Thompson.

Beer-happy Scott’s Addition will have a different kind of buzz once Ryan O’Rourke’s plans start to percolate.

O’Rourke and his wife Kelly are launching Ironclad Coffee Roasters at 2904 W. Moore St. The couple has leased a 1,100-square-foot former print shop just off North Boulevard near Bow Tie Cinemas, where Ironclad plans to fire up its custom-made roasting machine in December.

The company will look to sell its beans online and at farmers markets, do various on-site sales from its Scott’s Addition home and would eventually look to add wholesale accounts with grocers and restaurants.

O’Rourke said Ironclad hopes to roast between 150 and 200 pounds of coffee each week once operations begin.

For O’Rourke, 37, Ironclad is an outgrowth of a family business and his being a self-described coffee nerd. His parents owned two coffee houses in Tennessee where he helped out after graduating from University of South Florida. While in Ireland working for an Irish cultural website, he found good coffee was hard to come by and started roasting beans at home one pound at a time. 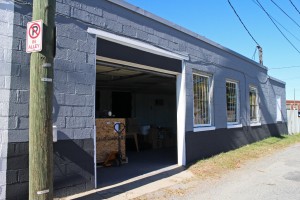 The O’Rourkes are renovating a space at 2904 W. Moore St., an address it shares with the Moore Street Cafe.

“That trained me on the basics and gave me a foundation of knowledge,” he said. “I really learned the art and the science of it. It was almost a no-brainer to look into doing this full-time because it became my passion.”

O’Rourke said now is the time to invest in small roasters that cater to people willing to spend extra for a quality brew. He said the coffee market is undergoing similar changes seen in the food and beer scenes.

“The coffee scene tends to skyrocket right with them,” he said. “It’s anything but saturated given the curve and growth of craft beer. I really believe the coffee scene has a lot of room to grow.”

There are already roasters with roots in Richmond. Nearest to where Ironclad is docking is Lamplighter Roasting Co. on Summit Avenue in Scott’s Addition. And Blanchard’s Coffee Roasting Co. and Black Hand Coffee Co. have also a built a following for their roasts.

O’Rourke said it’ll cost $50,000 to get in on the action, which he and his wife have financed themselves and with help from family.

He said the key to a good batch of coffee is the beans themselves. Ironclad is getting its beans from Nicaragua through a program called Gold Mountain Coffee Growers, as well as from other parts of Central and South America and Ethiopia.

“You can only coax out of a bean what’s in the bean,” he said. “You can definitely make it worse.”

The O’Rourkes moved from Ireland to Shockoe Bottom more than a month ago with plans to launch Ironclad. O’Rourke said the activity in Scott’s Addition made it an attractive place for the company to embark.

“It’s such a hot area right now,” he said. “It really seemed to fit what we needed.”

So excited to drink this brew !!!! Just what this area needs !!

That’s nice and all but in case O’Rourke didn’t know, we have 2 local and long standing coffee roasters here in the city already. Tough O’Rourke may not know that being from out of town.

Richmond is a small metropolis, I just can’t get behind someone trying to come in and cut business from 2 local establishments in a niche market.

Unusual stance to take all over coffee. If a small business owner is trying to bring jobs to our area, I’ll take it! Competition generally makes things cheaper for the consumer and results in a better product.

I trust that 100% of the local coffee drinks would not agree that their needs are served by having a whopping 2 stores in the area.

Hello, Clavius. Thanks for your comment. We’re **very** well aware of the existing coffee roasters here in Richmond, and we’re actually big fans of their work. We’ve been in contact with the three roasters who we feel are most similar to us to let them know of our plans to be good neighbors, friendly competitors, and part of the mission to extend and improve the coffee culture in RVA. Other American cities of similar size have a larger number of coffee roasters than Richmond. In our opinion, Richmond doesn’t need to think “small.” It’s coming into its own as a… Read more »

I should also mention that I specifically told the reporter from Richmond BizSense that we are fans of the work of RVA’s other micro-roasters. It wasn’t included in the article.

Clavius, I understand why you may feel that way but hope you change your mind eventually. Just look at the brewery industry. For such a long time, all we had was Legend. Now, Richmond is known nationally as a craft brewery city. That title helps every single one of us RVAers’, since it adds jobs and tourism opportunities. If these new breweries had that same level of dis-content from locals upon arrival; maybe a different city would be getting all of those cool craft brewery’s built. And the tax dollars with it (that ultimately helps our Richmond City children obtain… Read more »

Richmond is small, kinda why people like it and makes it what it is.

The beer over saturation and the “Why let all the west coast cities have all the cool coffee spots. Let’s do it right here in RVA! We’re cooler than those guys!” is more of the same millennial gold star mantra that I can’t get behind. Would rather see our city cultivate more legit industries than leisure beverages.

Fair enough, Clavius. We know we can’t please everyone, and we’re content with that. I’d love to hear about those “more legit industries” and why they’re “more legit.” Sounds interesting! Have a great day.

Cant wait to taste your coffee .

It’s good to see Ironclad Coffee Roasters joining RVA’s exploding food and beverage segment. It appears O’Rourke has identified some niches to serve and competition is always healthy for business.

Here’s hoping Ironclad Coffee is successful. With a name like that, I’m sure their coffee beans will be fresh, unique and come with an “ironclad” guarantee. It will also be a welcome addition to the ever-improving “Scott’s Addition” area.

Clavius, Don’t get cut by that axe you’re grinding. RVA is small? Last time I checked, the RVA metro area had over 1.25 MILLION folks living here. Surely, another coffee or another beer business isn’t going to hurt anyone. And if another building is occupied, paying rent to a local landlord and paying tax dollars to the city and state, how can that be adverse for anyone? A famous basketball coach put it best: Avoid cynical and negative people like the plague. They are killers of potential. Let Mr. O’Rourke move forward without the criticism; he obviously senses positive potential… Read more »

Key to the craft beer movement has been the idea that the craft brewers are not against one another, but against the macro brewers. The same should hold true for local roasters, together they should just be looking to improve their share of coffee sales in the region. Now you have more variety to choose from when buying local! Welcome Iron Clad–I’m very glad you’ve chosen to open in RVA.

Thank you so much, Bret! We’re so excited to be back in RVA.

Bret,
So good to see you clearly “get it”. The concept of competition is not difficult to understand, unless:
1) You’re afraid of it
2) You’re a socialist
3) You’ve never competed for anything

I think the individual making lame arguments against it probably fits into a couple of these categories.