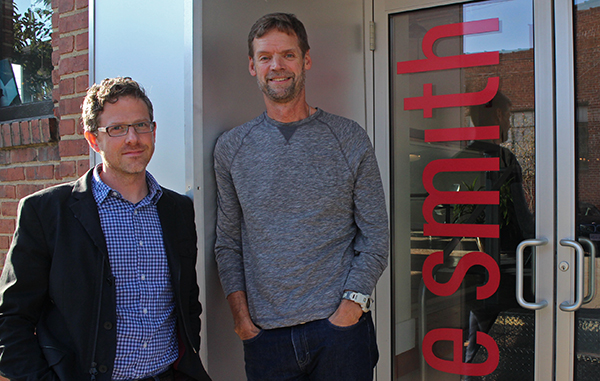 Christian Markow (left) and Barry Saunders have merged their startup into a larger local firm. Photos by Jonathan Spiers.

A 2-year-old local brand agency with an unassuming name has found itself the object of a national PR firm’s affection.

Scott’s Addition firm Joe Smith, led by founders Christian Markow and Barry Saunders, has been acquired by PadillaCRT. Terms of the deal, which was finalized in recent weeks, were not disclosed.

The transaction will see Joe Smith become PadillaCRT’s in-house branding arm in a bid to extend the PR firm’s reach into brand strategy and management.

Markow and Saunders will join the firm’s executive leadership team as senior vice presidents, and their current staff of six will all carry over in the deal.

Joe Smith will move from its current space in Scott’s Addition to Padilla’s Richmond office at 101 W. Commerce Road.

Lynn Casey, PadillaCRT’s CEO, said there was a reason for keeping the Joe Smith name alive.

“There is a good amount of equity in the name Joe Smith and the relationships that they have built up over the years,” Casey said. “We wanted to make sure that we didn’t do harm to that, so for the foreseeable future, the name will be separate.”

Saunders said PadillaCRT came calling this spring, when the agency – whose clients include Chick-fil-A and GE – was only a year and a half old. He and Markow said the attention was unexpected but made sense, in that Padilla has been looking to expand into brand strategy. 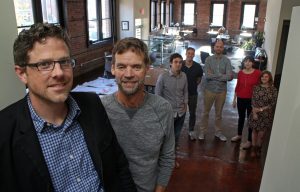 That formed the basis for the name PadillaCRT. And it brought into the fold Kelly O’Keefe, a brand strategist and professor at the VCU Brandcenter who has divided his time between PadillaCRT as a one-man branding shop and the advertising grad school.

“When we looked around and knew that we wanted to expand our capabilities and our resources beyond what Kelly O’Keefe has built, we knew that there was somebody in our back yard who was really going to be a great candidate,” said PadillaCRT President Mark Raper, who joined the firm after selling CRT/tanaka.

Since his days at CRT/tanaka, Markow said he has stayed in touch with Raper.

“We had an ongoing conversation purely out of friendship and respect, so it really was a comfortable conversation when we talked about acquiring,” Raper said.

With the added demand for brand services from PadillaCRT’s clients, which include the Virginia Lottery, Barnes & Noble Education and the Mayo Clinic, Raper said there’s no shortage of work awaiting Markow and Saunders and the Joe Smith crew.

“I jokingly have told Barry and Christian that I hope that they’re well-rested, because there’s great opportunity,” Raper said.

Saunders said he and Markow had entertained the idea of a firm like PadillaCRT acquiring Joe Smith one day, but not within two years of existence.

“Who starts knocking on an 18-month business’s door? It just doesn’t happen,” Saunders said. “To close, we sat and signed the papers on our two-year anniversary of founding this company.”

Saunders said the proposal appealed to them for the cultural fit and the business resources PadillaCRT brings to the table. Casey said the firm has a 30-person creative department that Joe Smith can now lean on without having to build its staff to that level.

“What a gift that someone would come along and accelerate us through the startup years,” Saunders said. “We were very much at that place where it’s the age-old dilemma of (growth versus resources). So this came for us at the perfect time.”