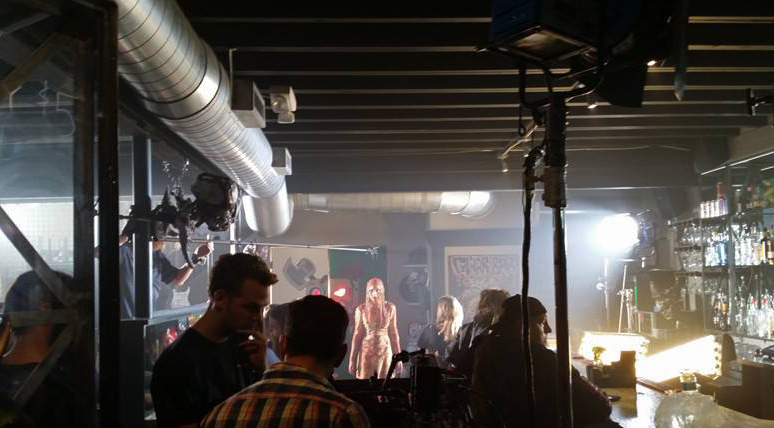 A group of creatives loosely linked to Richmond shock rockers GWAR has made its first foray into marketing.

The nearly two-minute video – shot in the band’s own GWARbar and featuring Bishop and other band members – is a first for both companies, which collaborated with local and out-of-town filmmaker friends who donated their time and resources.

Featuring visual nods to “Carrie” and other horror movies, the cinematic-style ad is the brainchild of Adkins and Rob Wooten, a Texas Beach co-owner who joined fellow owners Austin Green and Greg White earlier this year. Wooten, a graphic designer, was brought into the ownership fold after doing branding work for both Texas Beach and Misery Brothers.

Titled “Tomatoface” (think Leatherface from “The Texas Chain Saw Massacre”), the ad tells the legend of the Texas Beach mascot – its face a conglomeration of ingredients used in the Bloody Mary mix. Carrie is warned by the bartender (played by Bishop) to not say “Bloody Mary” three times – a rule she shrugs off and is later inclined to break.

Saying the third “Bloody Mary” at the bathroom mirror, Carrie is suddenly faced with Tomatoface, who unleashes its crimson-colored wrath. The Tomatoface mask was designed by Brad Douglas of River City Tattoo and created by Corrotted Artistry – another company with ties to GWAR.

“We like to think of him as the ‘Swamp Thing’ of the James River,” Wooten said. “We wanted to do something that no other company was doing – something you stop and look at and go, ‘What is that?’ We’ve taken the extreme side to our brand, and it stands out and it’s doing well.”

Since launching late last year, Texas Beach has grown from being sold in a handful of markets and restaurants to as many as 25 restaurants and 60 stores, Wooten said. The brand has expanded to Charlottesville and has its sights set on Northern Virginia, and its bottles can be found locally at Ellwood Thompson’s and Tom Leonard’s, as well as in Bloody Marys served at – of course – GWARbar.

The band’s presence in the ad underscores the reach of its tentacles throughout Richmond, not only in the city’s creative community but also in that community’s ventures into business. In addition to Corrotted Artistry, other GWAR-spawned ventures include Slave Pit Inc., an artist collective, production company and independent record label.

The band’s Jackson Ward bar and restaurant served as the backdrop for the shoot over 12 hours in September. While GWAR is all over the ad, Adkins said the Misery Brothers is a separate entity.

“The common denominator happens to be GWAR, but it’s one of those things that’s kind of coincidental,” he said. “It’s not like GWAR got us together; we just all happen to have some weird connection to GWAR.”

Among others who worked on the project were director Melanie Mandl, who rounds out the current Misery Brothers roster along with Justin Laughter, a musician and intellectual property attorney (GWAR is a client), and John Bryan, founding president of nonprofit CultureWorks and a former associate dean for development at VCU. 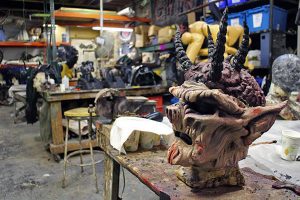 Other contributors included producer Lucas Krost of local company The Branching – he donned the Tomatoface mask for the ad – and cinematographer Mark Mervis, who served as director of photography. In addition to members of GWAR, the video stars local actresses Abbey Reddington as Carrie, Shannon Roulet and Jessica Carey.

Wooten said the actual cost for the production was less than $10,000 – considerably less than its estimated budget.

“We were really lucky in how this came together and people were interested in working on it for the love of working on it,” Adkins said. “If we shot this in L.A., it probably would have cost $200,000. We would not have been able to do that; we did not have that budget.”

Adkins said the commercial is the first of more to come from the Misery Brothers.

“That’s the plan – as soon as we hook up with the right clients,” he said. “We don’t want to just make any commercials; we want to have sort of our own brand of stuff that we work on. Michael (Bishop) in particular is talking to some companies that might be a good match. But we are definitely looking to expand our client work.”

In addition to the ad, the group’s work so far has included music for a promo for the recently wrapped Virginia Film Festival. The group also performs as a music act, as it has since 2006, when Bishop and Adkins started it as a duo after meeting while pursuing their music-related doctorates at UVA.

As for the ad, it is currently posted on the Texas Beach and Misery Brothers websites, and Wooten said they are talking to the Byrd Theatre about possibly screening it before films. As for other commercial mediums, Wooten said a shortened version could soon be coming to a cinema or television screen near you.

“We’re talking to Fox, CBS and Comcast, some of the local news places, and hopefully, after we get finished on funding, you’ll be seeing it on television within the next year,” he said. “That’s the next plan of attack.”