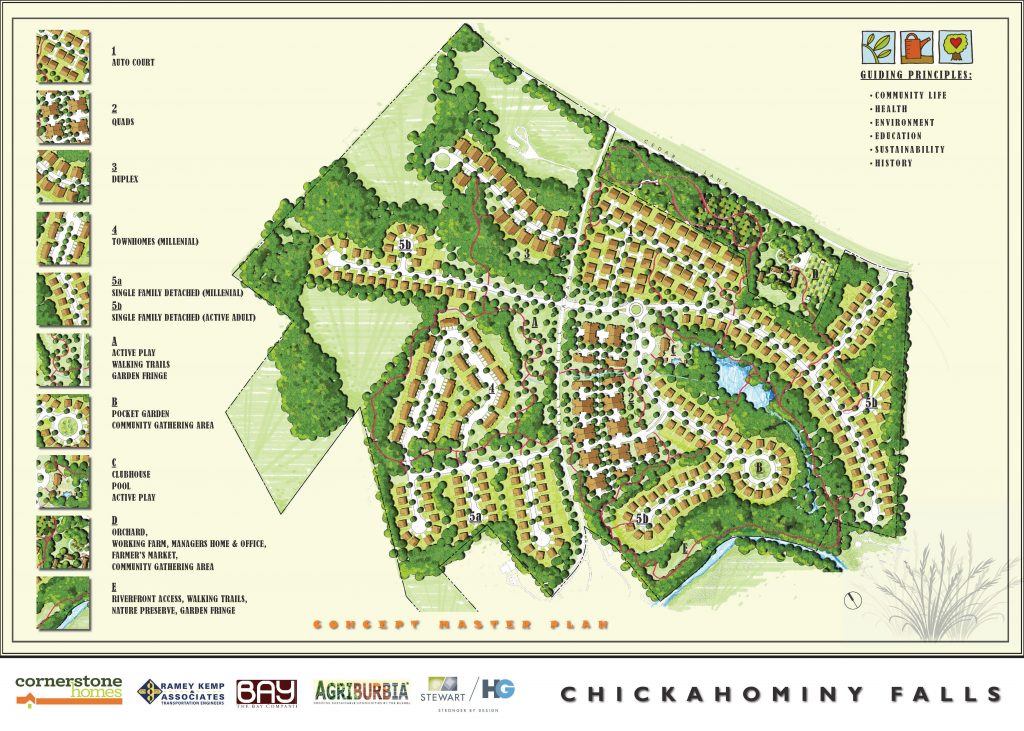 An updated site plan for the Chickahominy Falls development. Courtesy of Cornerstone Homes.

A developer’s vision for a community that would blend clustered suburban living with an organic farm is becoming clearer for Hanover County.

Roger Glover of Cornerstone Homes has unveiled more details for the project, called Chickahominy Falls, which would put as many as 400 homes on approximately 180 acres along both sides of Holly Hill Road just south of its intersection with Cedar Lane.

Glover first presented his plans in July but has since updated them with specific housing types and numbers based on feedback from county staff and the community. Those updates were presented to a crowd of about 50 county residents at a community meeting last week – the latest of several that Glover said he has held on the project.

The latest numbers, which are proposals at this point and remain subject to change, call for a maximum of 399 homes that would be made up of detached single-family homes, attached townhomes, duplexes and quads. The breakdown would see about 170 attached homes and 229 detached homes, with different housing types grouped in clusters to create a suburban village feel. 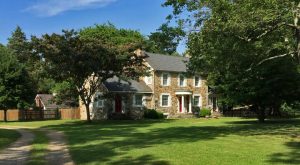 A 100-year-old home sits on a Hanover site proposed for a residential development. Photos courtesy of Jon Beckner.

Cornerstone Homes puts its focus on developments that cater to the 55-and-up homebuyer – those looking to downsize but who remain active in the community. While Chickahominy Falls is targeted to that age group, it also includes sections that are aimed at millennials and young families.

Glover said the goal is to create an interconnected community of various housing types and residents that are brought together by shared amenities, such as organic farming, community gardening and even a canning operation on the grounds of an existing century-old house – the former homestead of the family of Frank Hargrove Sr., a former longtime member of the Virginia House of Delegates.

“I’ve done a lot of age-targeted, age-restricted communities, and one thing that has always been a concern is that they may eventually become a little more age-isolated,” Glover said. “I like this idea of providing everybody their area but providing some connectivity.”

Glover is consulting on the farming concept with Matthew “Quint” Redmond of Colorado-based Agriburbia, which works to integrate farming into new and existing developments. 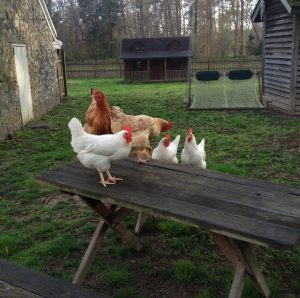 The property has a small working farm and garden that will become a centerpiece of the development.

Other details shared at the meeting covered setbacks and buffers that are planned along Cedar Lane and Holly Hill Road. Glover said those would include black-board fencing aimed at continuing the rural aesthetic of the area.

“We’re trying to make it consistent with the fencing and the farm feel that’s on Cedar Lane where the Hargrove home is – making that consistent all along Holly Hill and that section of Cedar Lane we’re abutting, as well,” he said.

Glover said he expects to receive comments from county staff later this month. Should the plans be found in compliance with county code and zoning regulations, he said the project, which would require rezoning approval, could go before the Hanover County Planning Commission in January.

Glover said Cornerstone Homes, which would be the builder and developer, would also oversee the property’s management as it builds out.

Glover said community reception to the project has been positive so far.

“I’ve been very encouraged, because this was a rather controversial area that was discussed when they went through the comprehensive plan adjustment and update four or five years ago,” Glover said. “This property did have another developer with a plan that really was much different than what we’re doing, so I didn’t know what to expect.

“That’s also the reason why we spent a lot of additional time working with the neighbors and the community. It was encouraged by staff, the planning commissioner and the supervisor for this area that we first and foremost met (with) and respected and understood what the neighbors were concerned about. And I think we’ve done that.”