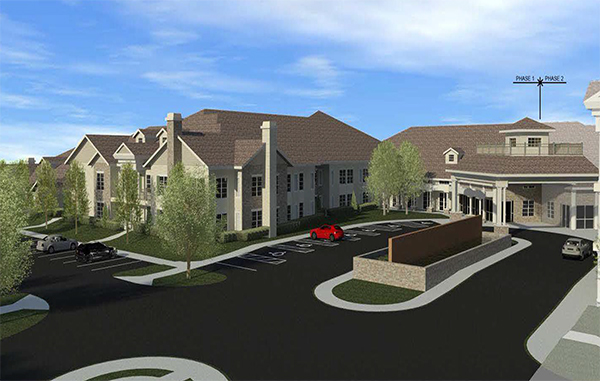 The Grove at Lucks Lane will create a large senior living complex with houses nearby. Images courtesy of Senior Consulting.

A New Jersey-based developer is making its first move in the Richmond market.

Senior Consulting LLC recently secured approval for the development of a nearly 200-unit senior living facility on about 20 acres in Chesterfield County along Lucks Lane near its intersection with Courthouse Road.

The project, dubbed the Grove at Lucks Lane, was recently approved by the county Board of Supervisors. Senior Consulting CEO Tim Cassidy said work should begin by the summer or fall of next year and wrap up about a year later.

“We looked around greater Richmond and saw new competition coming and a couple new projects in the Hanover area, plus several new projects in Henrico,” Cassidy said. “We felt the demand in Chesterfield was substantially higher than Henrico or Hanover.” 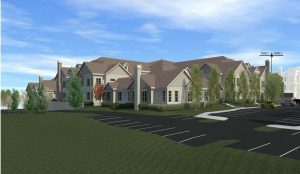 The main building will have 170 assisted living units with varying degrees of care.

“We would be an alternative to a nursing home for the majority of patients, and in some cases we will have hospice care available,” Cassidy said.

The main building will be around 140,000 square feet and will house the 170 units, Cassidy said. The 26 houses are designed as single-level ranch-style homes with garages, and residents will be able to walk to the main building for meals and services alongside the other independent living residents. The property, which is largely forested right now, will also include some walking trails.

A general contractor has not yet been selected for the project. The architect is Bessolo Design out of St. Petersburg, Florida, and Balzer and Associates is the engineer.

Cassidy declined to say how much the project will cost and said the developer is still working out financing. He said Senior Consulting is partnering on the project with a company led by a Florida-based surgeon but would not provide more details about the company.

Senior Consulting worked in senior living development in the mid-1990s, then got back into the business about seven years ago, particularly ramping up work in the past three years. It builds facilities along the East Coast, including in Tennessee, North Carolina, South Carolina and New York. It is currently working on more than 10 projects in those states, Cassidy said.

“In Virginia, we looked at over 25 markets,” Cassidy said. “We decided to be in five markets, including Chesterfield.”

Those other Virginia markets are Harrisonburg, Staunton, Christiansburg and Salem, where developments are now in the works.

The company will compete with several other facilities that have landed in Chesterfield over the past year from Bickford Senior Living, HHHunt and Commonwealth Assisted Living.

Henrico has had a slew of new projects, as well, including a new facility at the New Bridge Baptist Church, Manorhouse Assisted Living on North Gayton Road and a second Bickford Senior Living location.

Goochland has one in the works, too, at the Notch at West Creek.

Bickford has withdrawn it’s application in Henrico and chosen to focus on a site in Spotsylvania inatead.