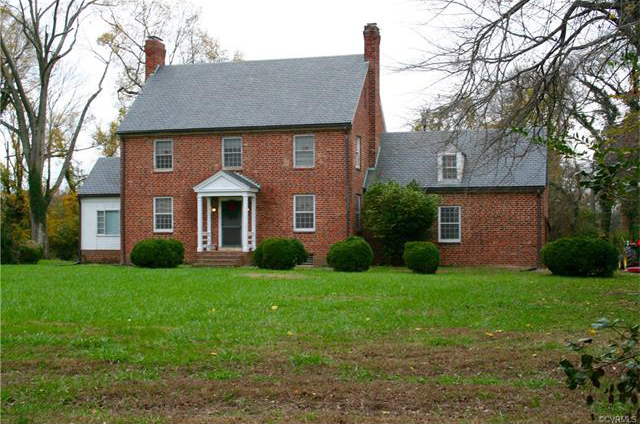 A 4,800-square-foot home sits atop a massive farm property in Henrico County. Photos courtesy of CVRMLS.

A riverfront farm near Rocketts Landing has hit the market in a rare eight-figure listing.

Chatsworth, a 477-acre property just south of the neighboring Tree Hill Farm, which has been proposed for a major mixed-use development, was listed last Monday for $23.8 million.

Fronting the river with views of the city skyline, Chatsworth encompasses 6710, 6720 and 6800 Osborne Turnpike and consists of two parcels: a 277-acre tract owned by Vail Family LLC, and a 200-acre parcel owned by Availand Inc.

The larger parcel’s owning LLC was formed in 1995, and the land was previously owned by Anne Warriner Vail et als, according to Henrico County property records. Availand Inc. purchased the smaller parcel in 2004 from Southern Ice Company Inc. 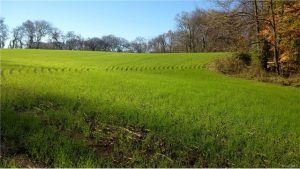 There is more than 200 acres of operational farmland on the property.

The property was listed by Susie Blanton of Long & Foster. She declined to comment on the record for this story.

In addition to farmland, the larger parcel includes a two-story brick colonial house built in 1940 and an adjacent cottage. The property has about 280 acres of mature hardwood forests and features 1 mile of frontage along the river and the turnpike.

While the listing says the property could be used as a private retreat, it also presents the land as a development opportunity and notes other potential uses, such as a mining operation.

A description states that adjacent land to the south, owned by Vulcan Lands Inc., has been selectively mined, and that Chatsworth has several million tons of mineable crushed rock, gravel and sand contained within roughly 75 acres along the riverfront.

The listing also notes the planned development of Tree Hill Farm, a 531-acre property between Chatsworth and Rocketts Landing. That property was approved in 2007 for 2,770 residential units, including single-family homes, townhouses, condos and apartments; 1.16 million square feet of office and commercial space; and 250 acres of open space and parkland.

Tree Hill is owned by Gray Land and Development Co., the land development affiliate of Richmond-based GrayCo. Russell Aaronson III, executive vice president and general counsel of GrayCo., said the company is holding off on the project for now.

“We’re patiently waiting for the market recovery before we get started in such a large, important project,” he said. “We’re just being very patient.”

The most recent county assessment for Chatsworth valued its two parcels at a combined $8.6 million, with a total land use value of $863,800. The latter value is set for tax purposes after a break from the county’s land use program.

Chatsworth isn’t the only sizeable land for sale along Osborne Turnpike. Near its southernmost end, where Osborne converges with Kingsland Road, the 150-acre Arrahatteck property was recently reduced from $1.4 million to $895,500.