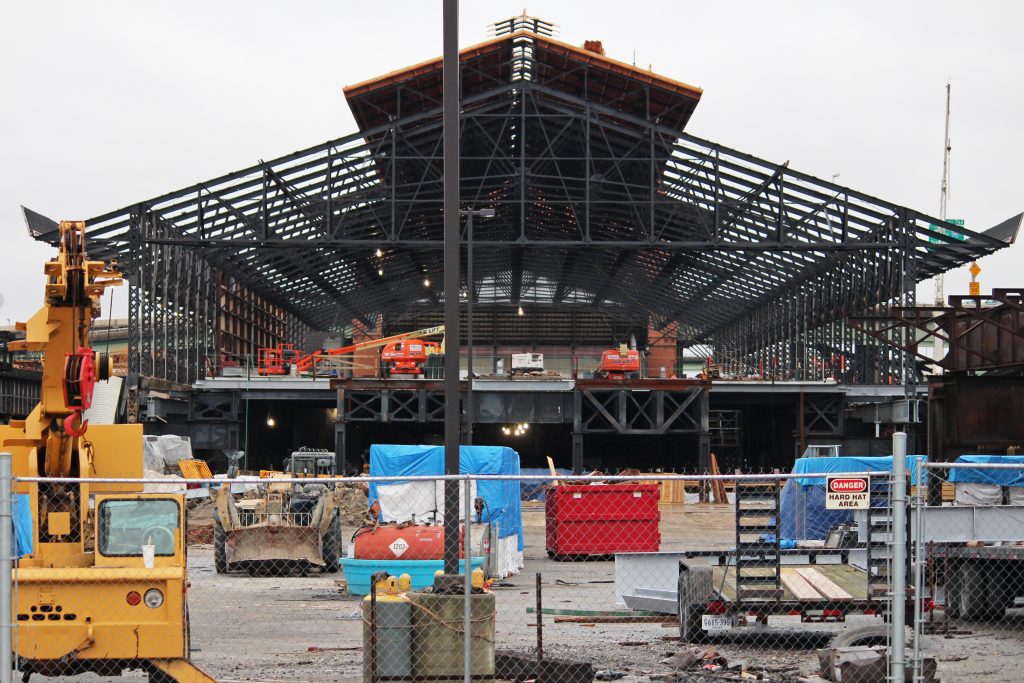 Heavy construction is underway on the exterior of the Main Street Station train shed. Photos by Jonathan Spiers.

The bones of Main Street Station’s long-dormant train shed are on full view at the Shockoe Bottom landmark.

Work is progressing on the third and final phase of a renovation project that will turn the steel structure into a space for retail and other potential uses. The 114-year-old shed is getting a new roof and its sides replaced with glass walls that will be illuminated at night, increasing its visibility along Interstate 95.

Work started on the shed in September 2014 and is planned to wrap up by next fall. The phase is projected to cost $48.5 million, just over half of the reported $86 million overall project cost, funded primarily by federal and state transportation dollars. 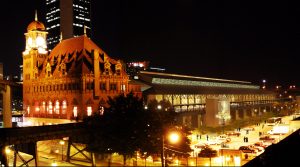 The renovations will side the shed with windows. Rendering courtesy of SMBW.

As the shed’s exterior shell is replaced, some of the features that make it historically significant are exposed – specifically its riveted steel frame and gable-roof design that contributed to its listing in 1970 on the National Register of Historic Places.

“It’s one of the first and finest examples of riveted steel on a gable shed roof,” said Jeannie Welliver, who is overseeing the project for the city’s Department of Economic and Community Development.

Unlike balloon-shed or arch-design buildings like Grand Central Station in New York City or Union Station in Washington, D.C., Main Street Station, built in 1901, features the triangle-shaped gable roof style, which Welliver said is about as rare as train sheds themselves.

“You don’t see many gable roofs after this time frame,” she said. “They went to more arches, balloon arches, and some of the sheds are gone now. Some of the original sheds built in this country have been torn down, so it’s one of the few remaining gable roof train sheds left in the country.”

Once complete, the renovated shed will offer nearly 100,000 square feet of space – 50,000 on the first floor; 45,000 on the second – for shopping and other uses that have yet to be determined. The city has sought public input in an online survey of what types of uses are desired in the shed. Welliver said the results of that survey are to be released soon.

The space will add to the station’s new chapter as a transportation hub. In addition to Amtrak train service, which resumed in 2003, the station is designed to accommodate high-speed rail service and is planned to be a stop on the GRTC Pulse rapid transit bus line. It will also serve Megabus, GRTC, and other transportation providers such as taxis and Uber drivers.

Across Main Street from the station, the city has also installed an electric vehicle charging station, which Welliver called the most comprehensive in the region.

“It already is a multimodal transportation center. We’re just expanding on that,” she said.

We’re excited to see what the future holds for Main Street Station. Such an iconic structure. If it’s done correctly, this could be a tremendous asset to Richmond’s city center.